(All translations, emphases and in-bracket remarks are by CAMERA Arabic)

As the tension in Jerusalem rose in late April, and more so during the recent escalation which began in early May, BBC Arabic began to repeatedly mischaracterise Jewish Israelis involved in violent incidents – victims and perpetrators alike. 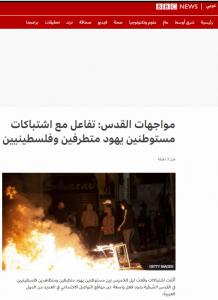 “Tension in Jerusalem streets escalated after a series of incidents of ethnic hatred between Palestinians and extremist orthodox Jews.”

With no evidence presented for this assertion, describing only one side involved in “a series of incidents of ethnic hatred” as “extremist” is a textbook example of biased framing, especially given that the social media videos showing ultra-orthodox Jews being attacked unprovoked in Jerusalem were already known to BBC Arabic editors at the time of publication.

Following communication from CAMERA Arabic, the BBC corrected the item on April 28th, so that the sentence in question now refers to “a series of mutual assaults between Jews and Palestinians”. In BBC’s official reply, the Arabic service editors nevertheless denied their attempt to portray the assault victims as “extremists”:

“The text did not imply that the victims of any attack were ‘extremists’ but the line referred to was amended in a way that focuses on the fact that the recent escalation included attacks by both sides.”

The same CAMERA Arabic communication also prompted two additional corrections in the same item. Thus, social media comments from the UK and Australia critical of the Palestinians – wrongly presented as “Israeli reactions” – are now jointly described as “an opposite viewpoint” and the Lehava extremists in Jerusalem – originally described as “settlers” – are now “hardline Jews”.

The “settlers” mischaracterisation was the focus of CAMERA Arabic complaints to BBC Arabic during the recent hostilities as well. Between May 13th and 15th the BBC inappropriately ascribed the title “settler” in the following cases:

“Bloody confrontations in Green Line cities […] between Palestinians of the Interior [i.e. Arab citizens of Israel] and Israeli settlers.” (May 13th)

“violence between Israeli settlers and Israeli Palestinians in the towns of Lod, Haifa, Jaffa and Ramla” (live bulletin of May 15th, 9:05)

“A Palestinian youth was killed in the city [of Lod] by a settler’s bullets Monday” (May 13th).

“Dozens of Israeli settlers assaulting a Palestinian youth in the city of ‘Bat Yam’” (May 13th).

“Four citizens from the city of Jaffa were burnt […] after the settlers set fire to one of the homes […] local sources indicated that the settlers threw Molotov cocktails towards homes […] the attacks by settlers have worsened the situation in the city” (live bulletin of May 15th, 7:14)

CAMERA Arabic hence contacted BBC a second time, pointing out that just as in the Lehava case, the term “settler” was wrongly used by BBC Arabic editors in all of the news items above. It also breaches BBC Academy guidelines, which specifically state that:

“Settlements are residential areas built by the Israeli government in the territories occupied by Israel following the June 1967 war.”

Consequently, we were able to prompt a second series of corrections on May 18th. The Bat Yam mob is now made up simply of “Israelis”. Those who threw Molotov cocktails at the Arab home in Jaffa became “perpetrators” and the Jaffa attacks are now described as “mutual”.

However, BBC Arabic’s review of the Lod incident, as well as its editors’ background statements, produced stranger formulations. Although they are in line with the “Lands of 1948” and “Palestinian and Israeli residents [of the same Israeli ‘mixed cities’]” terminology used by BBC Arabic throughout recent events, they should nevertheless be noted for their ambiguity and inaccuracy:

Additionally, a May 14th news bulletin referred to the Israeli communities near the border with the Gaza Strip as “settlements”, despite their being located inside Israel’s internationally recognised territory. Following the correspondence between BBC and CAMERA Arabic, they are currently referred to as “towns”.