Back in February we documented the BBC’s failure to disclose the extremist and antisemitic agenda of an organisation  called ‘Palestine Action’, members of which it euphemistically described as ‘protesters’, ‘activists’ and ‘demonstrators’. 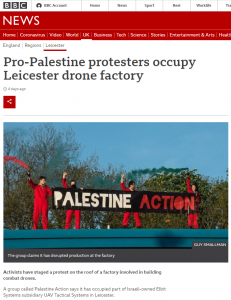 Between May 19th and May 22nd BBC East Midlands produced four reports – published on the BBC News website’s ‘Leicester’ page and promoted in the ‘updates’ section of the same website’s ‘Middle East’ page – about the same anti-Israel organisation (described as a “campaign group”) in which people engaged in acts of vandalism and trespass were once again portrayed as ‘protesters’ and ‘activists’.

Arrests at pro-Palestine drone factory protest in Leicester May 21st

As can be seen, in all those headlines the term “pro-Palestine” (rather than ‘pro-Palestinian or the more accurate ‘anti-Israel) was used (also in the body of some of the articles) despite the BBC Academy style guide’s instruction not to “affix the name ‘Palestine’ to Gaza or the West Bank”. 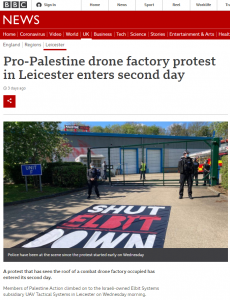 Two of the reports include images which are inaccurately captioned “The action has been prompted by recent conflict in the Middle East” despite the fact that ‘Palestine Action’ began targeting Elbit Systems long before Hamas launched its latest round of attacks. Some of the images in the third report are credited to “Palestine Action’ itself.

None of those four reports provides readers with a proper explanation of the group, its tactics and its political agenda which includes the following:

Despite having failed to provide that essential background information, all four reports uncritically quote and promote an allegation which there is no evidence of the BBC having independently confirmed: [emphasis added] 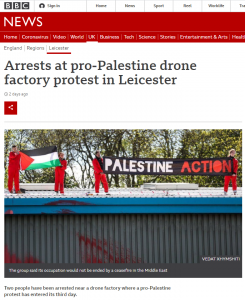 The facility builds unmanned aerial vehicles that the protesters allege have been used in the conflict between Israel and Hamas in Gaza.”

Two of the reports similarly quote and promote the group’s defamatory propaganda against Israel without any qualification on the part of the BBC and no right of reply given.

“In a statement, Palestine Action said: “Today’s action shows that it is entirely within our power to stop the production of brutal machinery which is fuelling war crimes in Palestine.

“The past week has shown the relentless death and destruction that Israeli forces can and will inflict with UK-made munitions and military technology.”” (article 1)

“”Our activism does not stop when Israel stops dropping bombs. It stops when the illegal occupation and systematic brutalisation of the Palestinians stop,” the group said in a statement.” (article 3) 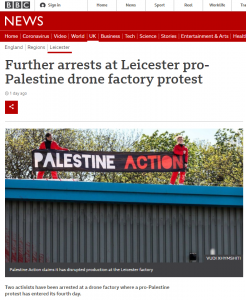 “We should normally identify on-air and online sources of information and significant contributors and provide their credentials, so that our audiences can judge their status.”

The failure of BBC East Midlands to provide audiences with information essential for comprehension of the political agenda and motives of ‘Palestine Action’ while at the same time uncritically amplifying that extremist group’s propaganda concerning both Elbit Systems and the State of Israel is clearly more indicative of conscripted journalism than any real commitment to providing BBC audiences with accurate and impartial information which would contribute to their understanding of this story.