Those following the BBC Middle East editor’s contributions to coverage of the recent attacks on Israel by Palestinian terrorist organisations in the Gaza Strip and Israel’s response to those attacks may have noticed his repeated promotion of a paper recently produced by two think tanks. 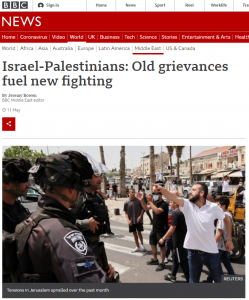 “Leaders on both sides have been fighting their own domestic political battles, concentrating on safeguarding their own positions, when the biggest issue for any Palestinian or Israeli leader should be making peace. That challenge has not been addressed seriously for years.

Some new ideas have emerged. Two respected think tanks, the Carnegie Endowment for International Peace and the US/Middle East Project have just released a joint report arguing that the first priority should be equal rights and equal security for both Palestinians and Israelis.

It says the United States should support “full equality and enfranchisement for all those residing in the territory under Israeli control; it will not endorse two separate and unequal systems”.

New thinking is good. This week though old realities, familiar rhetoric and the latest inevitable eruption of a century-long conflict are drowning everything else out.”

Two days later, in a filmed report titled “Israel-Gaza: BBC reporters’ reaction on the ground”, Bowen – by then in Jerusalem – told BBC audiences that: 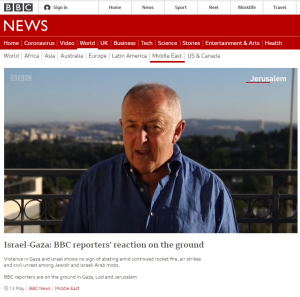 “These wars between Hamas and Israel – and they’ve been every few years now for about 15 years – have followed a pattern. And while the underlying political reasons and national reasons for the wars to be happening are still there, there will be more wars, even after this one. I hate to guarantee it but I think that’s happening. So what’s necessary to do, I think a whole new way of trying to deal with this conflict and trying to prioritise it. Some American think tanks came up with some good ideas recently where they said try and work on it in terms of equality. Not in terms of who’s gonna get this half of that town or that bit of land or that hill, but equality to start with. So in this whole land of…between the river – Jordan – and the sea – the Mediterranean – where they’re more or less…eh…equal amounts of Israelis – Israeli Jews – and Palestinians….” [emphasis in italics in the original]

For some reason (presumably not his nod to the antisemitic ‘from the river to the sea’ slogan) Bowen was cut off at that point in the BBC News website version of that report but as can clearly be seen, he thinks the proposals put forward by the four authors of that paper on behalf of the Carnegie Endowment for International Peace and the US Middle East Project are “good ideas”. So much so that he clearly has no problem recommending them despite BBC editorial guidelines on impartiality stating:

“4.3.11 Presenters, reporters and correspondents are the public face and voice of the BBC – they can have a significant impact on perceptions of whether due impartiality has been achieved. Our audiences should not be able to tell from BBC output the personal opinions of our journalists or news and current affairs presenters on matters of public policy, political or industrial controversy, or on ‘controversial subjects’ in any other area.”

So what exactly are those “good ideas” and what are the aims of the people who came up with them?

Zaha Hassan is listed on the Carnegie website as a visiting fellow who previously “was the coordinator and senior legal advisor to the Palestinian negotiating team during Palestine’s bid for UN membership, and was a member of the Palestinian delegation to Quartet-sponsored exploratory talks between 2011 and 2012”. That bio does not clarify that she is also a policy member at Al Shabaka – a BDS supporting, ‘right of return’ endorsing organisation with members who advocate for the dismantling of the Jewish state.

Daniel Levy is president of the US Middle East Project and a co-founder of J Street as well as a trustee for the Rockefeller Brothers Fund which has given grants to a variety of political NGOs supposedly engaged in ‘peacebuilding’.

As for the paper itself, it is perhaps most remarkable for what it does not say: that its authors advocate a two-state solution to the conflict.

Indeed in a recent interview, Hassan touted the ‘apartheid’ smear (also in an article she wrote together with Daniel Levy), expressed objection to the Abraham Accords (claiming that they are “undermining Israeli-Palestinian peace and international law”) and appeared to regard the so-called ‘one-state solution’ – the result of which would be the end of Israel as the Jewish state – as a legitimate option, albeit one which is not currently practicable.

“Of course, centering rights does not get you a peace agreement tomorrow. We aren’t so naïve as to think that—whether that’s a one-state solution or a two-state solution.”

Apparently then we can conclude that the BBC’s Middle East editor is of the opinion that ambivalence towards the right of Jews to self-determination is one of the “good ideas” put forward in the paper he is obviously keen to promote.