The Israel Security Agency’s report on terror attacks (Hebrew) during May 2021 shows that throughout the month a total of 2,805 incidents took place: 414 in Judea & Samaria, 178 in Jerusalem and inside the ‘green line’ and 2,213 in the Gaza Strip sector.

Fifteen people died and 168 were injured throughout the month. Thirteen of the deaths occurred during Operation Guardian of the Walls, one person died after a shooting attack at Tapuach Junction on May 2nd and one man died as the result of an attack in Lod.

The later BBC News website coverage does report that 13 people died during the eleven days of hostilities. The sole reference to the murder of 19-year-old Yehuda Guetta in the shooting attack at a Tapuach Junction bus stop was found – with no mention of his name – six days after the event in a report on another topic. The death of Yigal Yehoshua from Lod was reported on the BBC News website’s May 18th ‘live’ page. 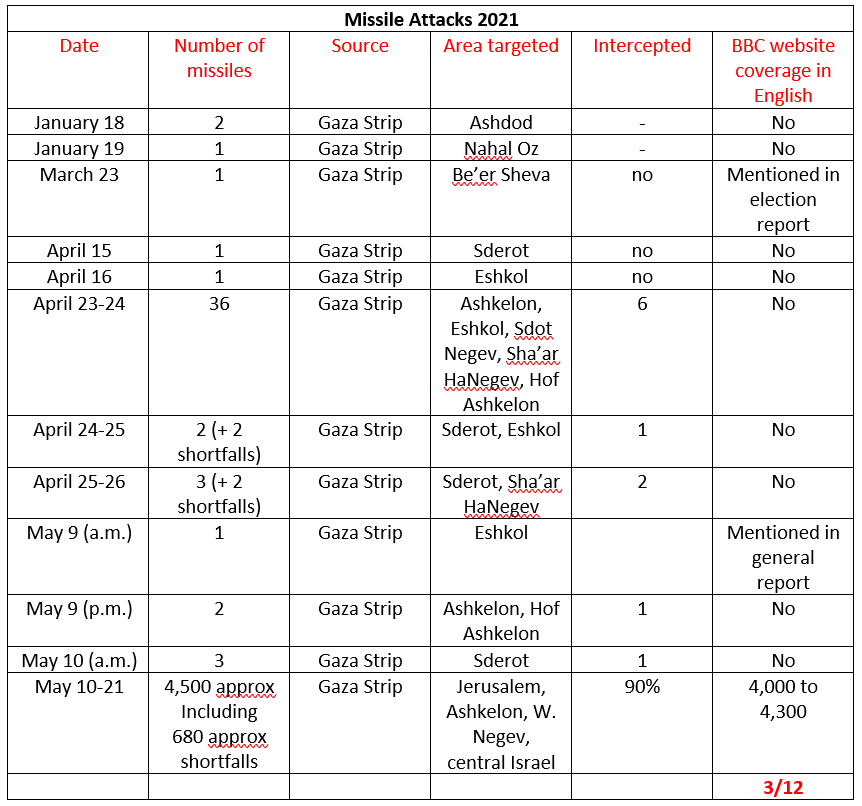 The May 16th vehicular attack in Sheikh Jarrah was briefly mentioned in BBC coverage, as was the May 12th anti-tank missile attack which killed an Israeli soldier near Netiv Ha’Asara and the similar May 20thattack near Zikim.

A generous appraisal would put BBC coverage at about 2,500 of the 2,805 attacks which actually took place and the coverage during May once again highlights the fact that the BBC for the most part ignores terrorism against Israelis which is not part of a major flare-up.