On June 2nd the BBC’s Sebastian Usher put out the following Tweet: 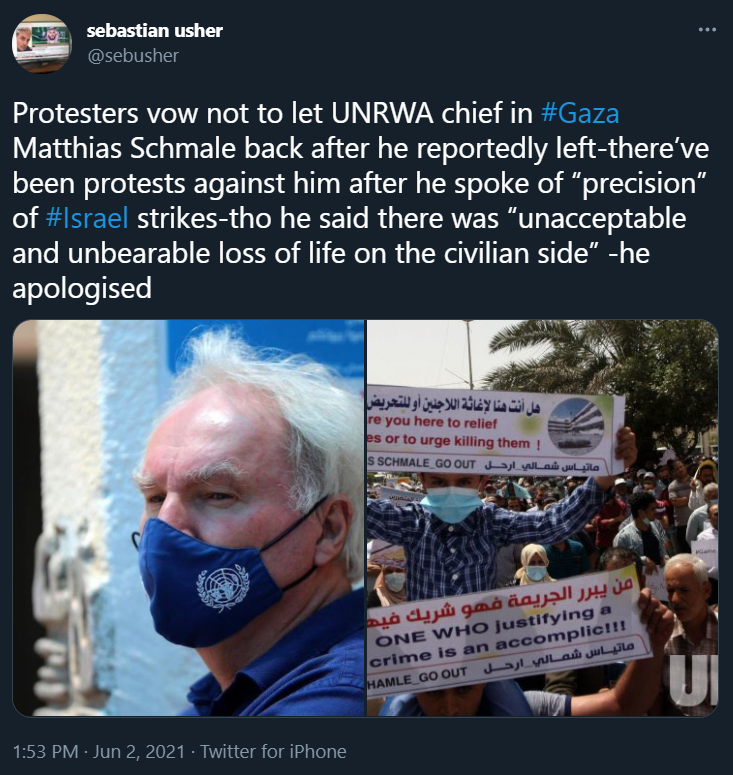 Seeing as the BBC has not produced any reporting on that story, his followers may well have had difficulty understanding what those ‘protests’ were about, who organised them and why.

The story began on May 23rd when the director of UNRWA operations in the Gaza Strip, Matthias Schmale, gave an interview (in English) to the Israeli channel N12 during which he expressed the opinion that Israeli strikes during the eleven days of conflict were “precise”, stated that some 1,000 residential units in the Gaza Strip had been destroyed and clarified that there had been no shortages of food, water or medical supplies throughout the hostilities.

Two days later, after his statements had incurred the wrath of Hamas, the Hamas dominated UNRWA workers’ union, assorted NGOs (including the PCHR) and others, Schmale issued an apology.

“Hamas said in a statement that his “comments are a complete distortion in favor of the Zionists including an attempt to exonerate the Occupation of the murder of 254 Palestinians, more than 40% of them children, women and the elderly.” […]

They accused Schmale of “indirectly praising the precision and sophistication of the Israeli army, when Israel is in fact constantly committing war crimes and crimes against humanity against the Palestinian people.””

On June 2nd Schmale was recalled from his post.

“Matthias Schmale, along with his deputy David de Bold, left the Hamas-run coastal enclave on Wednesday, according to Channel 12, the network to which the UNRWA director made the original comments last month. The interview led to accusations from Gaza rulers Hamas that he was exonerating Israel for the deaths of Palestinian civilians, prompting Schmale to apologize.

A spokesman for the United Nations Relief and Works Agency told Channel 12 that Schmale had been called back to Jerusalem for consultations and had decided to take an extended leave of absence.

De Bold was also deemed persona non grata by Hamas, according to Palestinian media, which said the terror group was demanding that both he and Schmale be fired.

The UNRWA spokesman told Channel 12 that De Bold would continue his job remotely from Jerusalem and that Deputy Commissioner-General Leni Stenseth would run the Gaza office on-site in the interim.”

UNRWA issued a statement on the matter and Stenseth has apparently already made efforts to paper over the cracks.

The statement asserted that Stenseth expressed understanding of the Palestinian reaction to Schmale’s comments, “affirmed her solidarity” with the Palestinians, expressed condolences on behalf of UNRWA, and called Schmale’s remarks “indefensible.””

Towards the end of his interview with N12, Schmale responded to a question concerning reconstruction in the Gaza Strip:

“You cannot work in a place like Gaza without coordinating with the local authorities; that’s true for any autocratic regime of this nature. My hope is that as our plans become clear, resources come in, they [Hamas] will give us – or allow us – the humanitarian space we need to get our work done.”

The UK government is one of UNRWA’s prime donors and it had already announced an “aid package” which includes an initial £3.2 million just days before Schmale’s interview. One might therefore have expected that his clarification that the UN agency ‘coordinates’ with the Hamas terrorist organisation would have prompted the BBC to cover this story for its tax-paying British audiences somewhat more extensively than in just one Tweet from a BBC editor.

THE UNRWA STORY THE BBC CHOSE NOT TO TELL

FOLLOW UP ON A GAZA STORY IGNORED BY THE BBC