The claim that Jews themselves are, by virtue of their putatively perfidious behavior, responsible for the racism targeting them is as old as antisemitism itself.  In fact, Both Mahmoud Abbas and Gilad Atzmon have gone so far as to allege that the Holocaust can be explained by Jews’ villainous behavior.  This excuse for Jew-hatred has been extended to Israel – with many arguing that the behavior of Israeli Jews, rather than the actions and beliefs of the perpetrators, explains antisemitic attacks against Jews in the diaspora.

Sadly, a CNN poll in 2018 on antisemitism in the EU included the following results, showing that a significant percentage of Europeans blame Jews in some fashion for their own victimisation:

This is the context by which to understand a Tweet yesterday by Sky News Middle East correspondent Mark Stone, who was responding to a tweet arguing that there’s a connection between biased, inflammatory British media coverage of Israel and antisemitism in the UK – a belief held by most British Jews.

The tweeter complained that his “children have to hide who they are” and that he’s “not sure they have a future in this country it’s got that bad”. 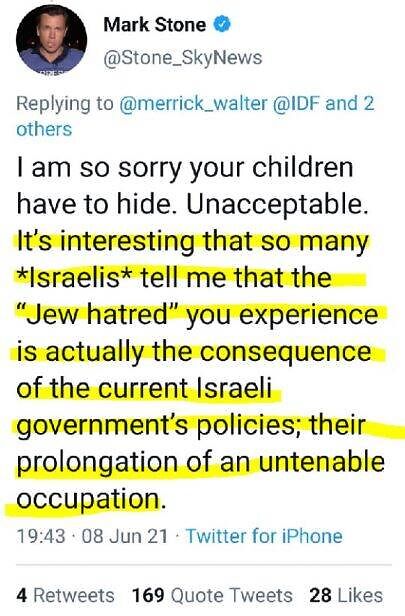 He later apologised, deleted the tweet, explained that it wasn’t his view, and that he was merely noting the views of Israelis he’s spoken to.

First, as we’ve noted previously, we strongly reject cancel culture, believe that Stone’s apology should be accepted and that there should be no calls for him to be fired.  Having said that, given his tweet, and other examples of his egregious bias we’ve posted about, we believe he’s forfeited any claim to impartiality when covering the Israeli-Palestinian conflict.

Moreover, whilst it would be edifying to know which Israelis he spoke to, the mere fact that a small number of Israelis – some of whom write for Haaretz, others for radical NGOs who peddle antisemitic tropes – may believe that their country’s actions explain Jew hatred doesn’t mean that Stone has to legitimise such views.

Think of this way: If an anchor for a far-right news network, or a columnist at a far-right news site, was commenting on anti-Black racism in the aftermath of George Floyd’s murder, and cited a few African-Americans he spoke to who blamed white racism on bad Black behavior (or the unjust policies of African nations) in a manner suggesting such views were legitimate, is there really any question he would face instant and near universal condemnation?

The mere fact that there are outliers within all historically oppressed minority communities that blame themselves or their community for the bigotry directed against them doesn’t mean that such opinions are any more legitimate than if uttered by racists outside the community.

We hope at the very least that Mark Stone learns from this episode the intuitive, seemingly tautological yet extremely important truism that seems to elude otherwise sober commentators: that the only people that cause or are responsible for antisemitism are anti-Semites themselves.