Visitors to the BBC News website’s ‘Middle East’ page on the morning of June 9th found the following: 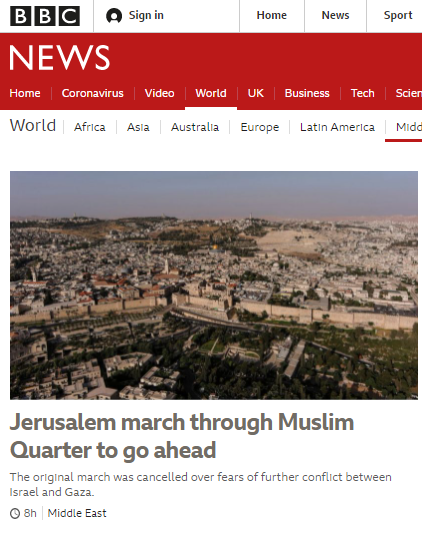 Those clicking on the link found the same headline: “Jerusalem march through Muslim Quarter to go ahead”. That report opened by telling readers that: 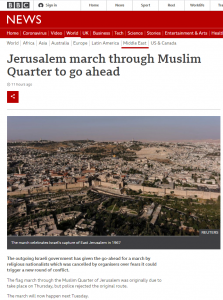 “The outgoing Israeli government has given the go-ahead for a march by religious nationalists which was cancelled by organisers over fears it could trigger a new round of conflict.

The flag march through the Muslim Quarter of Jerusalem was originally due to take place on Thursday, but police rejected the original route.

The march will now happen next Tuesday.”

But is that headline accurate? Will the flag parade go “through [the Old City’s] Muslim Quarter” on June 15th as the BBC claimed? In fact, that remains to be seen.

As reported by the Times of Israel and others: [emphasis added]

“The high-level security cabinet on Tuesday evening announced the contentious flag march planned in Jerusalem would be permitted to take place in one week, if police approve the route.

The compromise proposal brought forward by Prime Minister Benjamin Netanyahu and Defense Minister Benny Gantz and approved by ministers confirmed the event can go ahead “within a framework that will be agreed upon by police and organizers,” according to a statement released Tuesday.”

As the BBC report’s opening lines noted, previously the police rejected the organisers’ request for the march be allowed to enter the Old City’s Muslim Quarter through Damascus Gate. On June 7th it was reported that:

“A police source was quoted by Channel 12 news as saying that “no route that passes through Damascus Gate and the Muslim Quarter can be approved. The police won’t be able to recruit sufficient forces to secure such a route, in addition to many more forces that would have to be prepared in other areas where clashes would have been expected.””

Whether or not the police force is likely to change its stance on that matter is currently unknown but what is clear is that the BBC’s unequivocal claim that a march will take place next week “through [the] Muslim Quarter” was inaccurate and misleading and so CAMERA UK wrote to the BBC News website.

We very quickly received a response informing us that the headline had been changed to read “Israel approves flag march through Jerusalem’s Old City” and that the report itself had been amended to clarify “that the route is pending police approval”.

Presentation on the ‘Middle East’ page now looks like this: 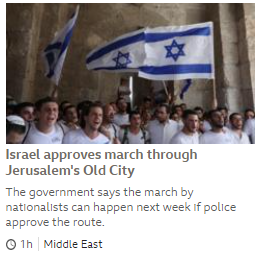 In the original version of the report readers were told that:

“The Jerusalem Day event normally takes place on 10 May and marks Israel’s capture of East Jerusalem – home to the Old City and its holy sites – in the 1967 Middle East War.”

In fact Jerusalem Day takes place on the 28th of the Hebrew month of Iyar – which does not necessarily fall on May 10th. In all its recent coverage of Jerusalem Day, the BBC has similarly referred to it as marking or celebrating “Israel’s capture of East Jerusalem” rather than the reunification of the city and has – as is also the case in this report – erased the 19 years of Jordanian occupation of those parts of Jerusalem from audience view.

The amended version of the article twice includes the inaccurate “10 May” claim (in the photo caption and the body of the report) despite CAMERA UK having alerted the BBC to that inaccuracy too. 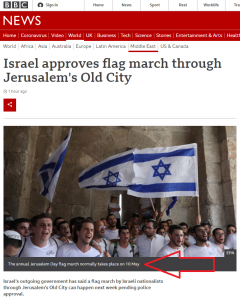 On June 10th the article was again amended to remove the two inaccurate claims concerning the date of Jerusalem Day.