On the evening of June 8th the BBC News website published a report titled “Israel says Gaza tower it destroyed was used by Hamas to try to jam Iron Dome”. 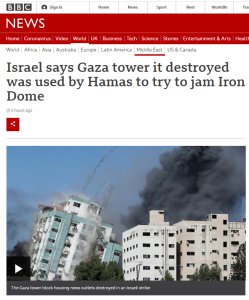 “Israel says a media building destroyed by one of its air strikes in the recent Gaza conflict was being used by the Hamas militant group to try to jam its Iron Dome missile defence system.

The Jala Tower housed the offices of Associated Press (AP) and Al Jazeera. […]

Israel’s envoy to the UN and ambassador to the US, Gilad Erdan, travelled to AP’s offices in New York on Monday and the Israel Defense Forces also released a statement on Tuesday.

Mr Erdan told executives of the US news agency that the building housing its Gaza operation was being used by Hamas to develop an electronic jamming system against the Iron Dome. […]

The BBC’s report does not provide readers with a link to that statement from the IDF. It does however promote statements from various parties including Associated Press – which, bizarrely, apparently believes it should have access to classified information.

“AP news agency said it had not seen evidence to support Israeli allegations that militants were operating there. […]

Associated Press told Haaretz it welcomed the meeting with Mr Erdan and the rebuilding offer, but added: “Israeli authorities maintain that the building housing our bureau was destroyed because of a Hamas presence that posed an urgent threat. We have yet to receive evidence to support these claims.

“AP continues to call for the full release of any evidence the Israelis have so that the facts are public.”

Shortly after the air strike, Sally Buzbee, AP’s executive editor, said it had had offices in the building for 15 years and had never had any indication that Hamas might be there.”

The BBC also found it appropriate to seek and uncritically amplify a statement from a proscribed terrorist organisation:

“Hamas, which controls Gaza, denied it had offices in the building and called its destruction “a scheming war crime”.

“The Israeli occupation’s repeated lies about the presence of Hamas offices in Jala Tower is a failed attempt to justify its crime by targeting a civilian tower that houses media offices and international television channels,” spokesman Hazem Qassem told the BBC.”

Last but not least, the article uncritically promotes statements put out by Al Jazeera:

“Qatar-based Al Jazeera strongly condemned the attack and said it would do all it could to “hold the Israeli government responsible for its actions”.

It condemned what it called a “clear act to stop journalists from conducting their sacred duty to inform the world and report events on the ground”.”

As readers may recall, Al Jazeera also featured widely in BBC coverage at the time that the Jala Tower was struck. Then as now, BBC audiences were not provided with any context concerning Al Jazeera such as its throwing of a birthday party for a terrorist, its record of Holocaust revisionism, its hosting of antisemitic content from the Muslim Brotherhood’s Qaradawi or the fact that it is funded by the same government that has poured millions of dollars into the Gaza Strip.

Neither has the BBC bothered to inform its audiences that – as reported by Kan 11 Palestinian affairs correspondent Gal Berger –  Gaza bureau chief Wael Dahdouh accepted a certificate of appreciation on behalf of Al Jazeera for ‘exemplary coverage’ of the recent conflict from Hamas’ Khalil al-Haya. Also present at the ceremony was the same Hazem Qassem quoted in this BBC report. Al-Haya noted that Al Jazeera had “demonstrated its affiliation with the cause of the oppressed Palestinian people” in its coverage and added that Hamas is “proud of the effective Al Jazeera crews”. 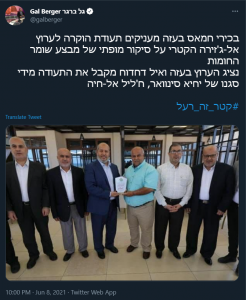 The BBC’s unquestioning amplification of baseless allegations of attacks ‘against journalists’ are bad enough but when such allegations come from an insufficiently explained source that is well and truly conscripted to Hamas’ anti-Israel agenda, the BBC’s own editorial standards must surely be called into question.