Over the past decade and a half, the BBC has repeatedly used the date June 7th to promote the notion that prior to 1981, the Iraqi Osirak nuclear reactor was only being used for peaceful purposes:

On June 7th 2021, the ‘Witness History’ programme returned to that topic in a programme titled ‘When Israel destroyed Iraq’s nuclear reactor’. 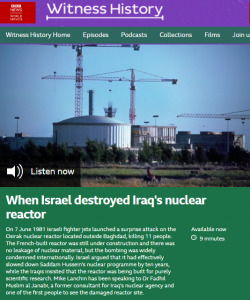 “On 7 June 1981 Israeli fighter jets launched a surprise attack on the Osirak nuclear reactor located outside Baghdad, killing 11 people. The French-built reactor was still under construction and there was no leakage of nuclear material, but the bombing was widely condemned internationally. Israel argued that it had effectively slowed down Saddam Hussein’s nuclear programme by ten years, while the Iraqis insisted that the reactor was being built for purely scientific research. Mike Lanchin has been speaking to Dr Fadhil Muslim al Janabi, a former consultant for Iraq’s nuclear agency and one of the first people to see the damaged reactor site.” [emphasis added]

“France and Iraq always insisted that the Osirak plant was for peaceful nuclear research and not part of a wider nuclear weapons programme.”

No effort is made to examine the veracity of those claims or to explain what led Israel to reach different conclusions.

Despite having told audiences in the introduction that Operation Opera was “the first ever airstrike against a nuclear facility” Lanchin goes on to mention an earlier strike:

“Then in September 1980, just a few days after the outbreak of the Iran-Iraq was, the plant was attacked by two Iranian Phantom jets, although they only hit some outlying buildings. It was shortly after that incident that Israeli leaders took the secret decision to destroy the reactor themselves.”

According to the IAF, operational plans began to be drawn up in 1978.

Towards the end of the programme Lanchin returns to the topic of Iraqi denials of a nuclear weapons programme.

“Israel has always said that by bombing the reactor that June day, it slowed down Iraq’s plans to build nuclear weapons by at least ten years. But Dr al Janabi – who went on to become head of the Iraqi nuclear agency under Saddam Hussain – insists that developing a nuclear bomb was never the intention.”

Notably, despite the topic of Operation Opera cropping up every few years on the ‘Witness History’ programme, the BBC’s narrative remains exactly the same as it was a decade ago.