Late last month we raised the topic of the BBC’s avoidance of reporting on Hamas’ misappropriation of building materials after the 2014 conflict and the failure of the UN monitored mechanism that was supposed to ensure that those supplies went solely to civilian construction projects:

On June 10th an article by the BBC Jerusalem bureau’s Yolande Knell appeared on the BBC News website’s ‘Middle East’ page under the headline “The dilemma of rebuilding Gaza without rearming Hamas”. 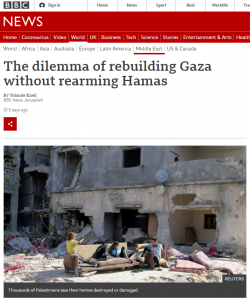 Knell’s article of course does not explain to BBC audiences why the corporation previously repeatedly avoided the topic of Hamas’ hijacking of concrete and additional materials. It does however uncritically amplify UN statements about “checks” on the mechanism which failed since its outset in 2014:

“The UN is under pressure to reform an elaborate mechanism that it set up to supervise the entry of building materials to Gaza after the 2014 conflict.

“We’re working on that right now with the Palestinian Authority and the Israeli side to determine how we can make it faster,” says Lynne Hastings, the UN Resident Co-ordinator for the Occupied Palestinian Territory.

She told journalists checks were also being carried out “to see whether or not any mistakes by any of the parties involved may have been made over the past several years, to ensure that the aid is not diverted”.

All supplies entering Gaza are supposed to be carefully stored by approved importers and monitored with cameras while UN inspectors check they are only used for legitimate repairs. Their data is shared with Israeli intelligence.” [emphasis added]

One interesting aspect of Knell’s article is her unsubstantiated claim that counter-terrorism measures which have not changed since that last reconstruction drive in 2014 are now likely to make reconstruction efforts “slow and complicated”.

Also notable is her portrayal of the blockade as a response to Hamas’ violent coup fourteen years ago this week – but without any mention of the rocket fire against Israeli civilian communities which caused the Israeli government to designate the Gaza Strip as ‘hostile territory’ three months later.

“A land and sea blockade of Gaza, which is imposed by Israel and Egypt, looks set to make reconstruction slow and complicated.

This was introduced after Hamas seized full control of the tiny territory from the Palestinian Authority (PA) in a bloody internal battle in 2007, a year after it won the last general election.”

Following Israel’s 2005 disengagement from the Gaza Strip, internationally endorsed agreements were signed between Israel and the Palestinian Authority which had been established under the terms of the Oslo Accords. That explains why, as Knell notes:

“The US and other foreign donors insist that the internationally accepted PA must continue to be their partner in rebuilding Gaza.”

Nevertheless, Knell continued with promotion of the view of one inadequately presented and far from impartial commentator:

“Some commentators express concern at the way aid is being used as a diplomatic tool to boost and legitimise the PA leadership.

Just prior to the Gaza fighting, the PA President Mahmoud Abbas had postponed the first parliamentary election in 15 years. He said this was because Israel was blocking voting in Jerusalem, but many believe it was because his Fatah faction looked set to lose to Hamas.

“It’s effectively trying to impose the results of an election without having elections. They’re saying to the people of Gaza: if you want things to be rebuilt, we’re not going to push for elections, but we’re going to push for these people who we like to be in charge.””

Former PLO legal advisor Diana Buttu is a fairly frequent contributor to BBC content despite her long record of promoting falsehoods in the media. Yolande Knell clearly found it appropriate to amplify her politically motivated talking points which serve only to muddy audience understanding of Palestinian Authority responsibility for the Gaza Strip and why foreign donors insist on working with that body rather than the terrorist organisation that previously hijacked building materials in order to build an underground tunnel network.

Knell’s report includes a video captioned “Two children from Gaza City and Israel describe their experience of the Israel-Gaza conflict” which originally appeared on the BBC News website’s ‘Middle East’ page between May 21st and May 30th. 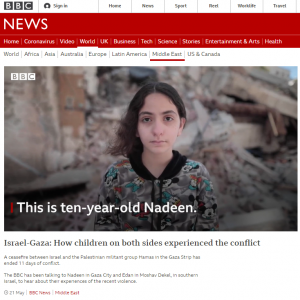 Although the BBC’s video only presents the ten-year-old girl with remarkable English as Nadeen, she has appeared in content produced by other media outlets – including the Independent, NBC and Middle East Eye – under the name Nadeen or Nadine Abdullatif from Shati and she has several videos online.

The BBC does not clarify how it made contact with her but one of the videos in the public domain, dating from two days before the BBC’s filmed report, sports a banner reading “The Press and Information Government Center” which is an official body of the Hamas government in the Gaza Strip.

It would of course be extremely unfortunate for BBC impartiality were it the case that the corporation had been put in touch with “Nadeen in Gaza City” by an official Hamas body.