Though the word “courageous” is often over-used in our discourse, that adjective is, if anything, a profound understatement when recounting the harrowing story of how Kay Wilson, British-born Israeli tour guide, survived an indescribably brutal Palestinian terror attack.

In her book, ‘The Rage Less Traveled: A Memoir of Surviving a Machete Attack‘, Wilson recounts the details of the 2010 attack, in the Mata forest near the town of Beit Shemesh, which took the life of her Christian friend Kristine Luken, her long and painful recovery, and her crusade for justice. 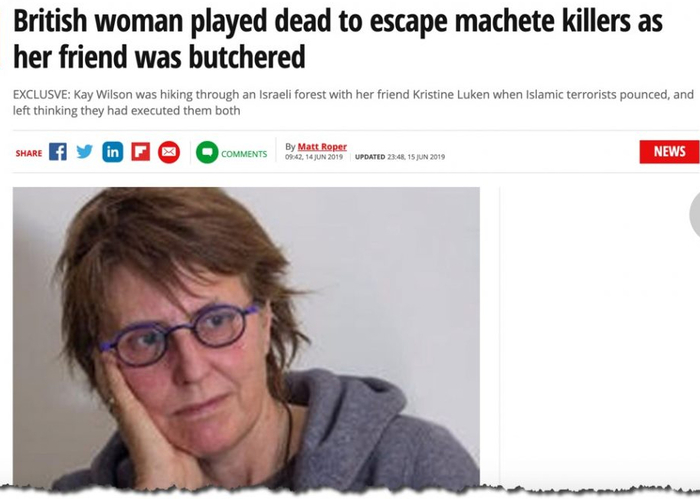 To characterise the attack as vicious doesn’t due it justice. Wilson sustained thirty broken bones in all, which included six open compound fractures of her ribs. Her sternum was broken in two places. She also suffered thirteen machete lacerations in her lungs and diaphragm.

Wilson, who was holding a penknife, fought back and managed to stab her attacker with a pen knife. The DNA from his blood stains were one of the main factors which helped police solve the case.

What is most striking – in addition to Wilson’s strength and determination – is her honest and detailed account of her emotions in the aftermath of her attack: her guilt over Luken’s death, the impact of her severe PTSD on her loved ones, her agonising rehabilitation, and the moment in court when she was forced to sit a few metres away from the terrorist who savagely attacked her, a Palestinian who previously acknowledged his goal that December day was to murder as many Jews as possible.

The book, superbly written, with a poet’s mastery of prose and a tour guide’s eye for detail, is an extremely valuable testament to the human impact of Palestinian terror, particularly in light of a media landscape in which the incalculable trauma to Israeli victims of such racist-inspired violence is largely ignored.