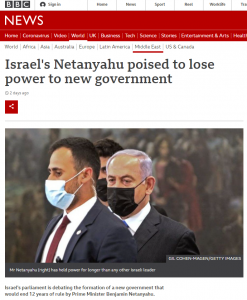 All three of those reports include the following:

“In appearance, Mr Bennett’s government would be unlike any which has preceded it in Israel’s 73-year history. The alliance contains parties which have vast ideological differences, and perhaps most significantly includes the first independent Arab party to be part of a potential ruling coalition, Raam.”

Most readers would probably not pay too much attention to the use of the word “independent” in that second sentence but it does have a purpose and that is to relieve the writer of the need to point out that the Mapai associated Arab parties ‘Progress and Development” and “Cooperation and Brotherhood” were part of Israel’s ninth government (1959 – 1961) and subsequent ones. 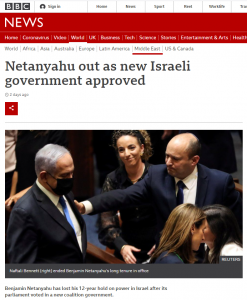 All three reports continue with information concerning the number of female ministers (nine) in the new government before going on:

“The inclusion of Raam and left-wing non-Arab Israeli parties means there could be friction on issues such as Israeli policies towards Palestinians – Yamina and another right-wing party, New Hope, are staunch supporters of Jewish settlement in the Israeli-occupied West Bank, for instance.

There could also be difficulties over social policies – while some parties want to advance gay rights, such as recognising same sex marriages, Raam, an Islamist party, is against this.

In addition, some parties want to relax religious restrictions more extensively than Yamina – a national-religious party – will likely allow.”

That reference to “left-wing non-Arab Israeli parties” does not enhance audience understanding of the fact that both the Labour party and the Meretz party have Arab members currently sitting in the Knesset. 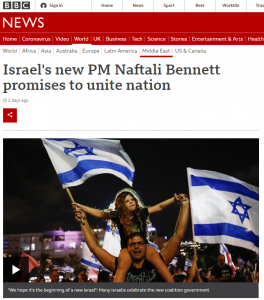 The third of those BBC reports goes on:

“Mr Gantz, who heads the centre-right Blue and White party, will continue serving as defence minister in the new government.

The leader of the left-wing Labour and Meretz parties, Merav Michaeli and Nitzan Horowitz, will be the ministers of transport and health respectively.”

Less than two months ago the BBC chose to uncritically amplify Human Rights Watch’s ‘apartheid’ smears concerning Israel on more than one of its platforms and that baseless trope is mainstreamed disturbingly often in BBC content.

That makes the fact that in all three of those ‘permanent public record’ BBC News website reports about Israel’s new government, no effort was made to inform audiences of the fact that it includes Muslim and Druze ministers and deputy ministers (or that six of the parties currently represented in the Knesset also include Muslim, Christian and/or Druze MKs) all the more noteworthy and worrying.