Visitors to the BBC News website’s ‘Middle East’ page on the morning of June 16th were informed that Israel had carried out strikes on Gaza after an “arson balloon” (singular) had been launched.

The report to which that headline linked was originally – and accurately – titled “Israel strikes in Gaza after arson attacks”. That headline was subsequently changed to read “Israel strikes in Gaza after arson balloons launched”. Later on in the morning the headline was amended yet again and what started off as “arson attacks” was downgraded to “fire balloons” – including on the ‘Middle East’ page.

The report itself – “Israel strikes in Gaza after fire balloons launched” – relates to three main topics presented in its opening paragraphs:

“Israel says it carried out air strikes in Gaza overnight after Palestinians launched incendiary balloons from the territory, in the first major flare-up since an 11-day conflict last month.

The Israeli military said it targeted compounds belonging to Hamas, the militant group that controls Gaza.

The incendiary balloons sparked 20 fires in southern Israel on Tuesday.

Hamas said they were a response to a march by Israeli nationalists in occupied East Jerusalem.”

Interestingly, while some may consider that the “flare-up” began (literally) when Hamas approved the launching of airborne incendiary devices into Israeli territory much earlier in the day, the BBC reserved that description for Israel’s response.

Rioting at the border between the Gaza Strip and Israel which began in the afternoon and continued into the night is not mentioned in the BBC’s report. Neither is the connection of the rioters and balloon launching squads to Hamas made clear.

The report’s first sub-section is headed “What do we know about the strikes?” and it uncritically amplifies a Hamas spokesman’s claim to “rights” in Jerusalem.

“A Hamas spokesman said on Twitter that Palestinians would continue to pursue their “brave resistance and defend their rights and sacred sites” in Jerusalem.”

The report then briefly turns to context in the form of a topic which has been repeatedly ignored – or reported badly – by the BBC.

“In recent years, militants have frequently sent helium balloons and kites carrying containers of burning fuel and explosive devices over the Gaza border.

The devices have caused hundreds of fires in Israel, burning thousands of hectares of forest and farmland.”

Readers may recall that the sole BBC report in which audiences heard the grand total of one minute and twenty seconds of comment from one of the people affected by those arson attacks on farmland, woodland and nature reserves dates from nearly three years ago.

The report goes on to signpost Israel’s new prime minister as “a right-wing nationalist” before presenting an insert of comment from a BBC employee in the Gaza Strip which does little to contribute to audience understanding of the story.

The BBC’s report then turns to the topic of the Jerusalem Day flag march, once again framing it as marking the “capture of East Jerusalem” in 1967 rather than the unification of the city. As ever, the 19 years of Jordanian occupation of that part of the city is absent from the BBC’s account.

“The Jerusalem Day flag march is an annual event that marks Israel’s capture of East Jerusalem – home to the Old City and its holy sites – in the 1967 Middle East War. Palestinians see it as a provocation.

At Tuesday’s event, hundreds of mostly young, nationalist Israelis danced, sang and waved Israeli flags in front of the Old City’s Damascus Gate, the main entrance to the Muslim Quarter.

They later entered through another gate to reach the Western Wall, one of Judaism’s holiest sites.”

“More than 30 Palestinian protesters were injured and 17 people arrested as Israeli police cleared areas of East Jerusalem ahead of the march, firing stun grenades and rubber bullets.”

They are not informed that some of those “protesters” engaged in rock throwing which resulted in injury to two members of the security forces or that a “day of rage” had been declared. 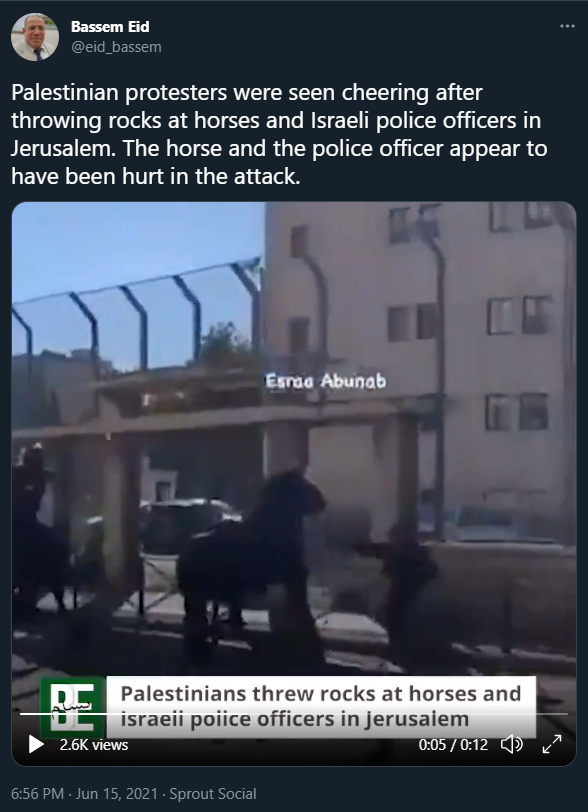 The final section of the report is headed “Why was there a conflict in Gaza last month?” and once again the BBC whitewashes Hamas’ deliberate escalation of tensions while apparently suggesting that a sovereign country should heed a terrorist organisation’s threats.

“The conflict began after weeks of spiralling Israeli-Palestinian tension in East Jerusalem which culminated in clashes at a holy site revered by both Muslims and Jews.

Hamas began firing rockets into Israel after warning it to withdraw from the site, triggering retaliatory air strikes from Israel on Gaza targets.”

The report includes a video of two children which has been widely promoted in additional BBC content and was previously discussed here.

Earlier versions of this report inaccurately stated that twelve – rather than thirteen – Israelis died in the recent conflict but that was later corrected.

The report closes by quoting “the UN”:

“The UN said at least 128 of those killed in Gaza were civilians. Israel’s military said 200 were militants; Hamas’s leader in Gaza put the number of fighters killed at 80.

More than 16,000 homes in Gaza were destroyed or damaged in the conflict, along with 58 schools and training centres, nine hospitals, 19 clinics and vital infrastructure, according to the UN”.

That information was sourced from the infamously partial UN agency UNOCHA and has appeared as such in previous BBC reports. There is no evidence of any of those figures having been independently verified by the BBC – including the “UN” casualty figures sourced in part from the Hamas-run ministry of health which of course deliberately does not differentiate between civilians and combatants and does not clarify how many of the dead were killed by the Gaza Strip terrorists’ own munitions. Neither is any clarification offered as to how many of the homes and other buildings were destroyed or damaged as a result of shortfall rockets or due to their being in the proximity of terrorist infrastructure.