On the morning of June 19th the BBC News website published a report relating to news from the previous day concerning Israel’s announcement that it would transfer over a million doses of Pfizer vaccinations against Covid-19 to the Palestinian Authority. Following the delivery of the first batch that same afternoon, the PA announced that it was cancelling the arrangement.

“The Palestinian Authority on Friday evening dramatically announced that it was cancelling a deal in which Israel would supply it with some 1 million Pfizer vaccine doses to help with its floundering coronavirus vaccination campaign.

The PA said the doses, which Israel began shipping to the West Bank on Friday, are too close to expiring. However, Israeli officials insisted they were fine and should not be wasted.

“The professional teams in the ministry found that the vaccines we received today from Israel did not meet the specifications, so the government decided to return them,” said PA Health Minister Mai al-Kaila. […]

There was no immediate official Israeli reaction to the cancellation, which came after it was Shabbat in Israel, but Army Radio quoted a Health Ministry official as expressing incredulity.

“We don’t know what they want, the vaccines are fine,” the official said.

The Ynet news site said the vaccinations transferred to the Palestinians on Friday were good until the end of June and July, with Israel deliberately sending those first so they would not be wasted. The rest of the vaccines set for delivery have a later expiration date and were good for several months.” 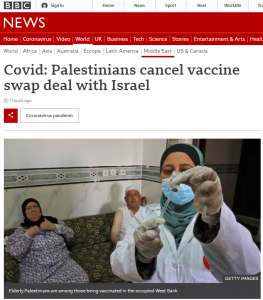 “UN experts had been critical of Israel’s failure to fully extend its vaccination programme to Palestinians under its control.”

As we noted back in January, those “UN experts” are in fact two UN special rapporteurs (who are not UN staff members) for the notoriously anti-Israel UN Human Rights Council – Tlaleng Mofokeng and Michael Lynk. In common with numerous previous BBC reports, this one too makes no effort to inform audiences of the obviously relevant anti-Israel record of one of the authors of the cited document.

“The Israelis said the Palestinians were responsible for managing health matters in the territories.”

Back in early February the BBC acknowledged that the Oslo Accords “give the Palestinian Authority oversight of public health” following a complaint.

One must therefore ask why the corporation insists on continuing to misrepresent the part of the 1995 Oslo II agreement relating to health (Article 17) which states that “Powers and responsibilities in the sphere of Health in the West Bank and the Gaza Strip will be transferred to the Palestinian side, including the health insurance system” as merely something that ‘Israel says’ is the case.