“Maintaining due impartiality in our content and activity on social media is as important as on our own platforms.”

“We must ensure that our use of hashtags to aggregate our content and join in social conversations doesn’t support or allow us to appear to be supporting a cause, promoting a brand or point of view.”

“When someone is clearly identified with the BBC and/or discusses their work, they are expected to behave appropriately and in ways that are consistent with the BBC’s editorial values and policies.”

“Where individuals identify themselves as being linked with the BBC, or are programme makers, editorial staff, reporters or presenters primarily associated with the BBC, their activities on social media have the potential to compromise the BBC’s impartiality and to damage its reputation. Our audiences must be able to trust the integrity of BBC programmes and services and be confident that the outside activities of our presenters, programme makers and other staff do not undermine the BBC’s impartiality or reputation or that their editorial decisions are not perceived to be influenced by any commercial or personal interests.”

“Individuals involved in the production or presentation of any output in News or other factual areas that regularly deal with a range of public policy issues have a particular responsibility to avoid damaging the BBC’s impartiality. Nothing should appear on their social media accounts which undermines the integrity or impartiality of the BBC.”

(Excerpts from BBC’s guidance concerning social media activity of employees, under the subheadings “Impartiality”, “Personal Activity” and “Expression of Opinions on Social Media”.)

CAMERA Arabic has conducted further research into the social media activity of BBC Arabic employees (in addition to those which we have mentioned elsewhere by name). The social media profiles of all eight individuals listed below currently identify them with BBC Arabic. All but two do not include a voluntary disclaimer which would (ostensibly) separate their views from those of the BBC.

London-based Abbas Srour has been working for the BBC since late 2014. On May 15th 2021 he responded with a laughing emoji to his personal friend, Twitter user “Mohamad Trad”, who shared an antisemitic joke told by Hamas spokesperson Abu Obaida:

“By God, Jews, I’ll make you pay the price of the garbage bags you used to put in front of Prophet Muhammad’s door”

This joke refers to a widespread antisemitic tale about a Jew who used to put trash in front of the Prophet’s door every single day. Srour’s friend commented: “Abu Obaida nailed it.” 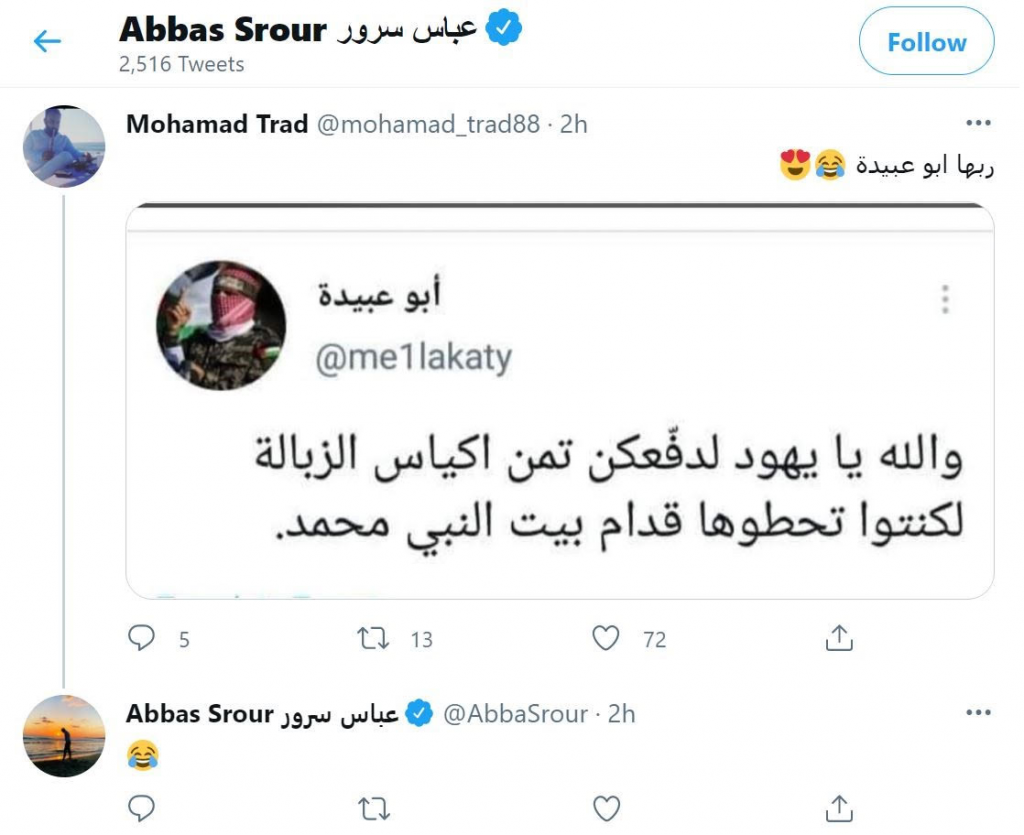 Luela Hassan has been working for BBC London and BBC Arabic as a “journalism researcher” since May 2019. On May 15th she Tweeted the following (note the “Zionism is terrorism” sign in particular): 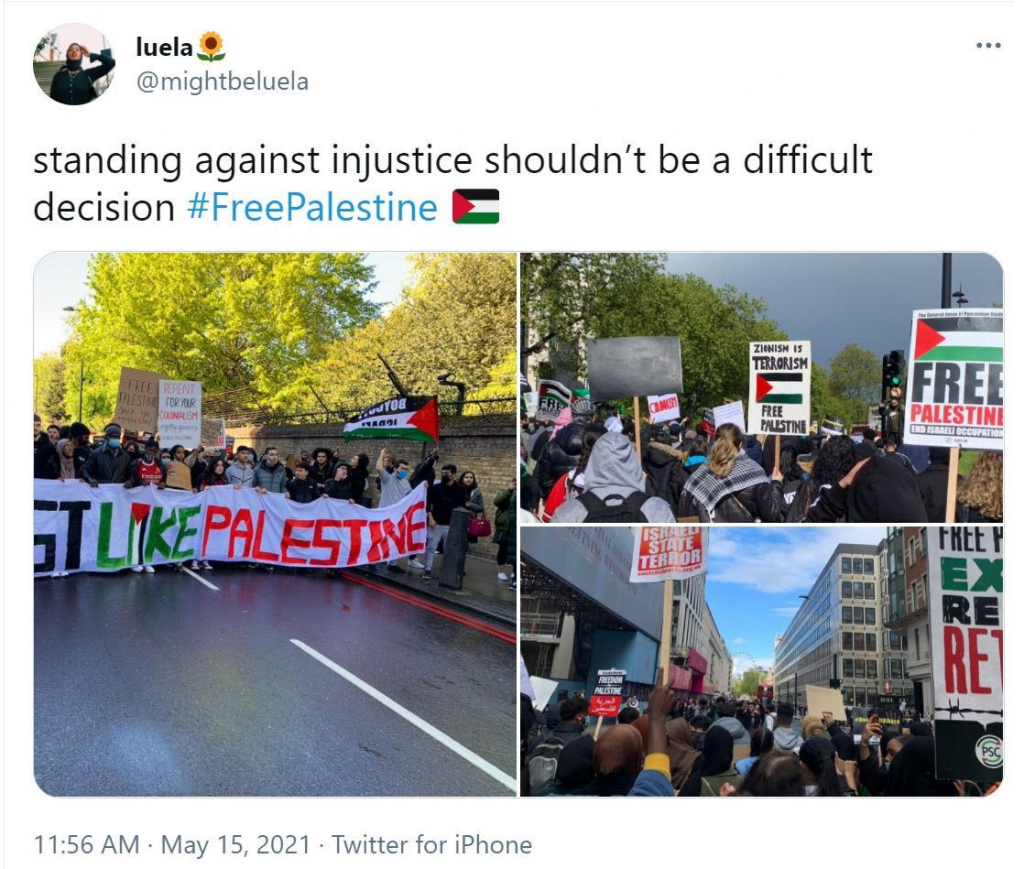 Layla Bashar al-Kloub has been working for the BBC as an Amman correspondent since October 2020. Before that, when she was already a freelance journalist in 2016, she posted the following tweet about Israel following the sentencing of a 14 year-old Palestinian assailant to 12 years in prison:

“The Zionist entity does not recognize any international law or agreement, their entire [legal] proceedings are infringements of human rights treaties

They are the terrorists, not us

Given that as a part of her work, al-Kloub occasionally covers Israeli affairs for BBC, one must assume that the corporation was not aware of that Tweet when it hired her. All of al-Kloub’s recent comment is only given the hashtag #Palestine, contrary to BBC official policy. That calls into question the impartiality of her observations concerning Israel-Jordan relations during the recent round of escalation. For example:

May 10th, Twitter: “Popular anger in Jordan does not subside in concurrence with any escalation in Palestine. The same ‘no embassy, no ambassador’ banners and chants, [after] more than 20 years of peace agreement, and the question remains: What does Jordan benefit? And does the diplomatic stance reflect the will of Jordanians? 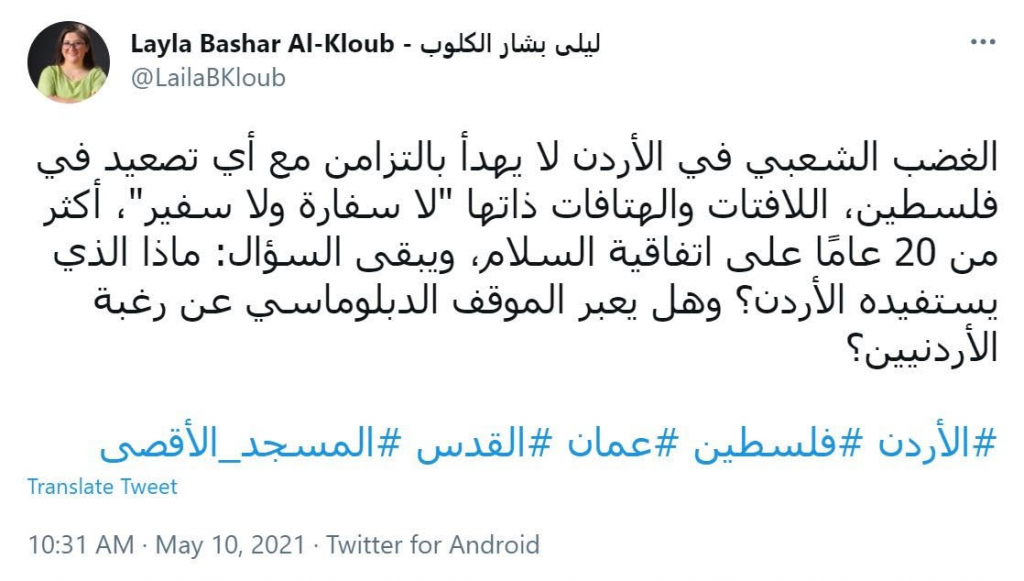 From the beginning of May, al-Kloub posted a series of musings which (much like her 2016 Tweet) reflected her opinions concerning what was happening on the other side of the Jordan river.

May 5th, Facebook: “By God, the entire world in one hand and Palestine in the other hand”

In particular, she promoted an alleged Zionist-free past of the land:

May 16th, Twitter: “[A more accurate translation of the Arabic reads:] Palestinians recall the map of their country before Israeli occupation of 1948”. 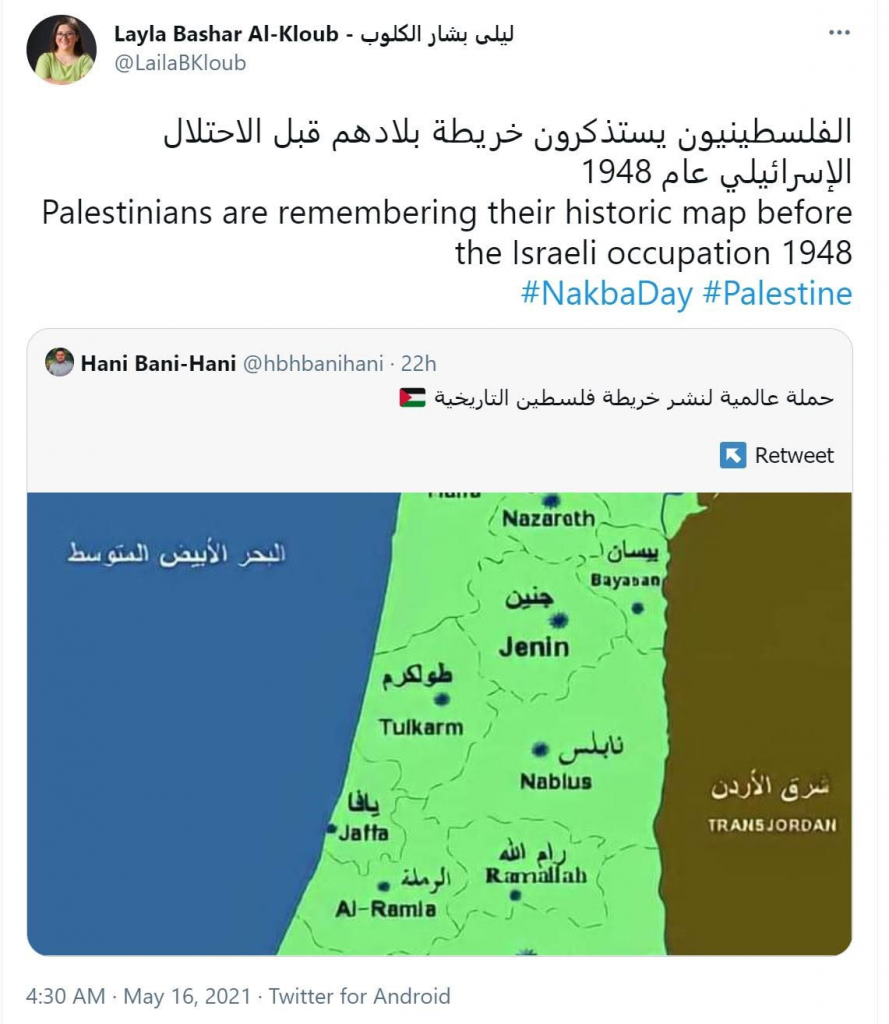 Several hours later on Twitter: “130 years of colonialism, with about a million French/European settlers resided in Algerian cities. When it [Algeria] became independent in the sixties, most of them exited the country despite many of them were born there… In 1980 none but several thousands remained… A lesson to us and you
#History #Algeria” 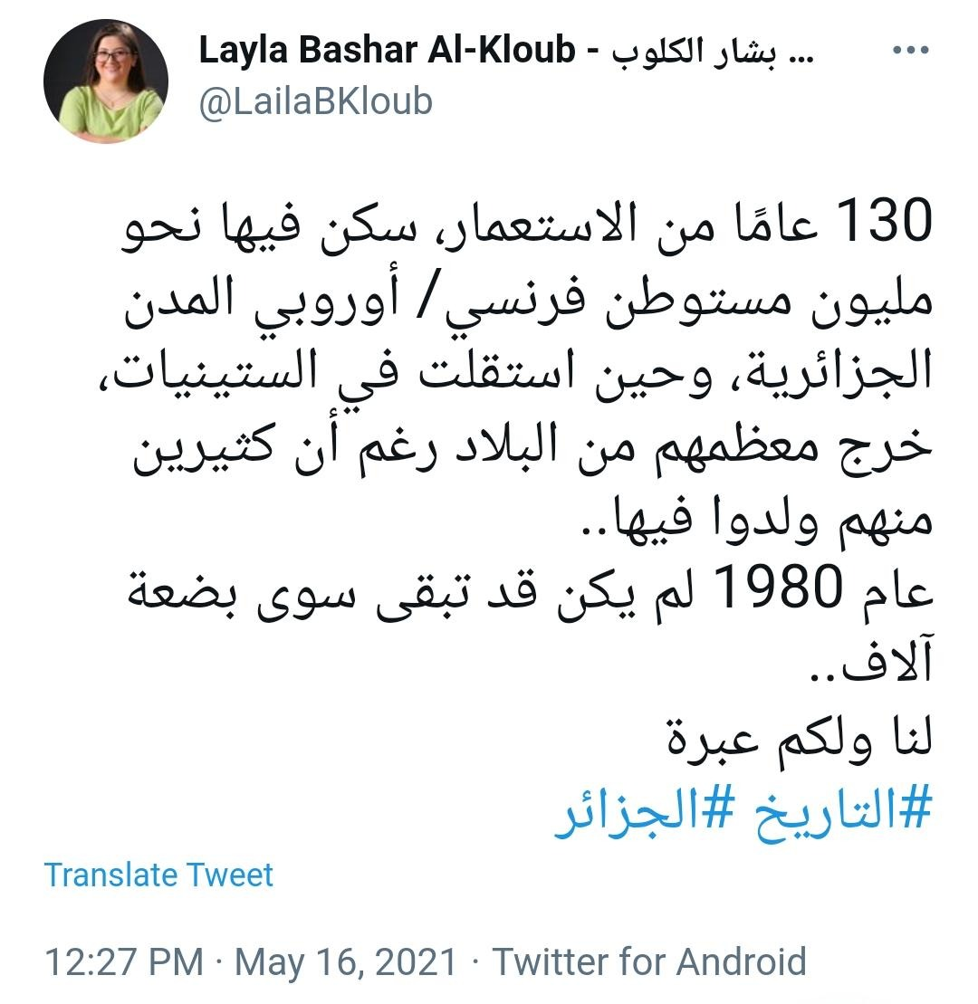 May 29th, Facebook: “Clock towers which Palestinians built, 48 years before the establishment of Israel”. 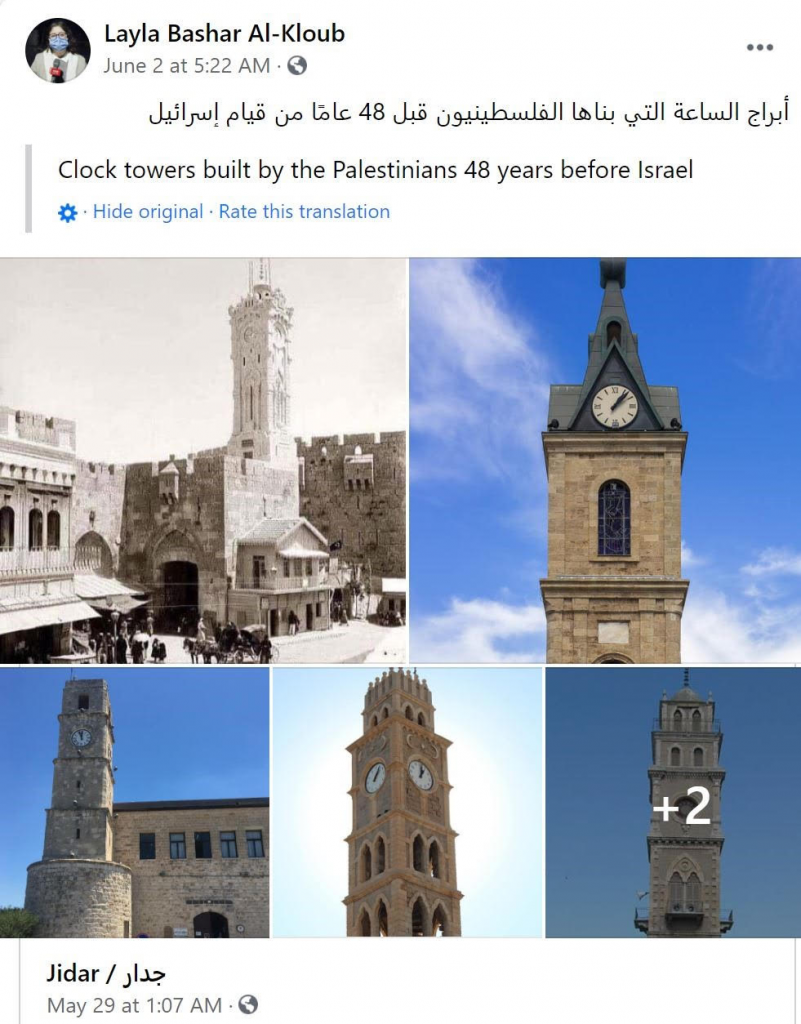 During that turbulent month, al-Kloub also stood at the side of fellow “journalists-activists”, defending their right to promote hate speech against Israelis on social media. On May 11th she opposed Facebook restricting the account of Ibrahim Sahouri, a Jordanian user whose social media posts referred to Israeli civilians injured and killed by attacks from Gaza on the Western Negev, including 6 year-old Ido Avigal, as “Zionists” and “settlers”.

On May 20th, she praised the personal achievements of Muna Hawwa who faced Instagram restrictions. She described the restrictions being lifted “a triumph for the free word”, and referred to Hawwa’s parroting of rabid Hamas propaganda as “exquisite journalism”. Hawwa is an unrepentant Holocaust denier who was sacked on grounds of antisemitism from Aljazeera.

BBC Arabic’s West Bank correspondent Eman Eriqat does not use Twitter’s “like” button often but one time she did see fit to do so was in response to the following Tweet from her close relative (probably father) Wasef:

“In Jerusalem Israeli prestige was broken, and our heroic people registered an accomplishment which armies fell short of.” 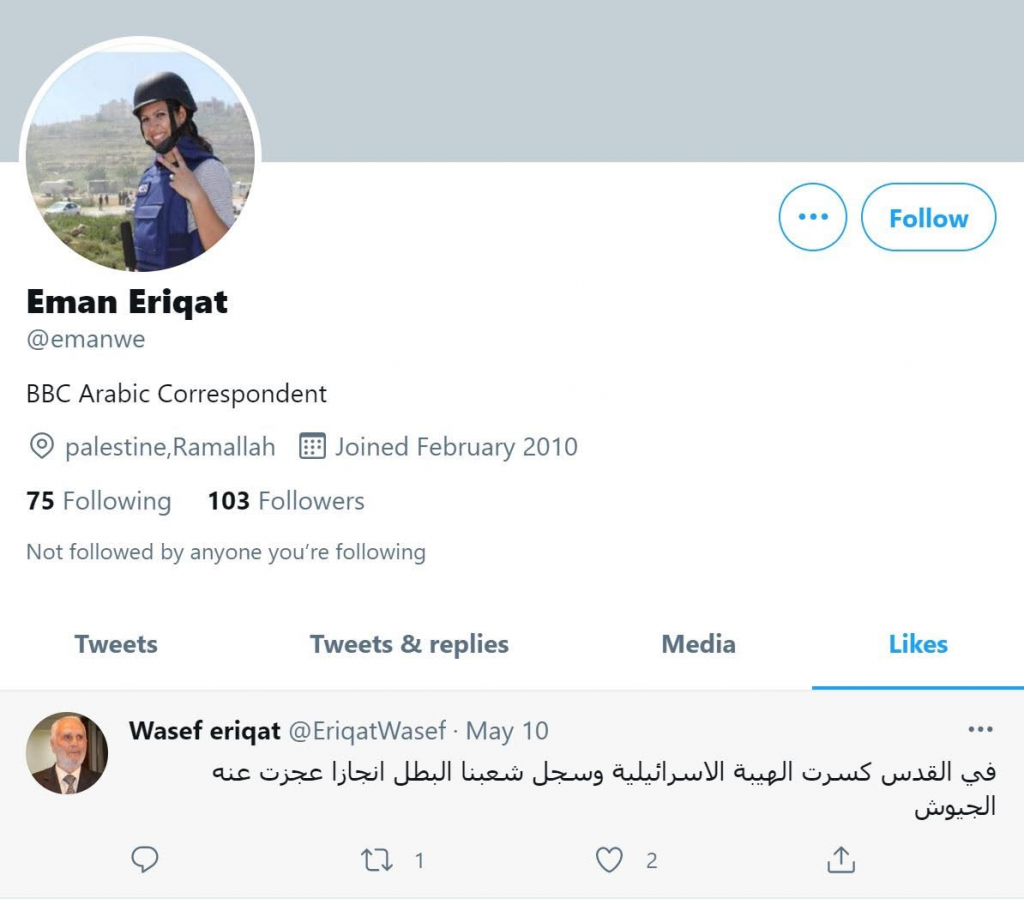 The Twitter account of Egyptian Mohamed Tarek suggests that he is currently a producer for both BBC Arabic and Vice Arabia. That did not stop him from recommending “an informative video” created by a third, local Egyptian outlet he works for: Mada Masr:

May 18th, Twitter: “Have a look at an informative video of the Palestinian map since the beginning of the occupation by Zionist gangs and the proclamation of the state of Israel

[The user of Mada Masr presents the video:] For the Nakba anniversary and in view of current events […]” 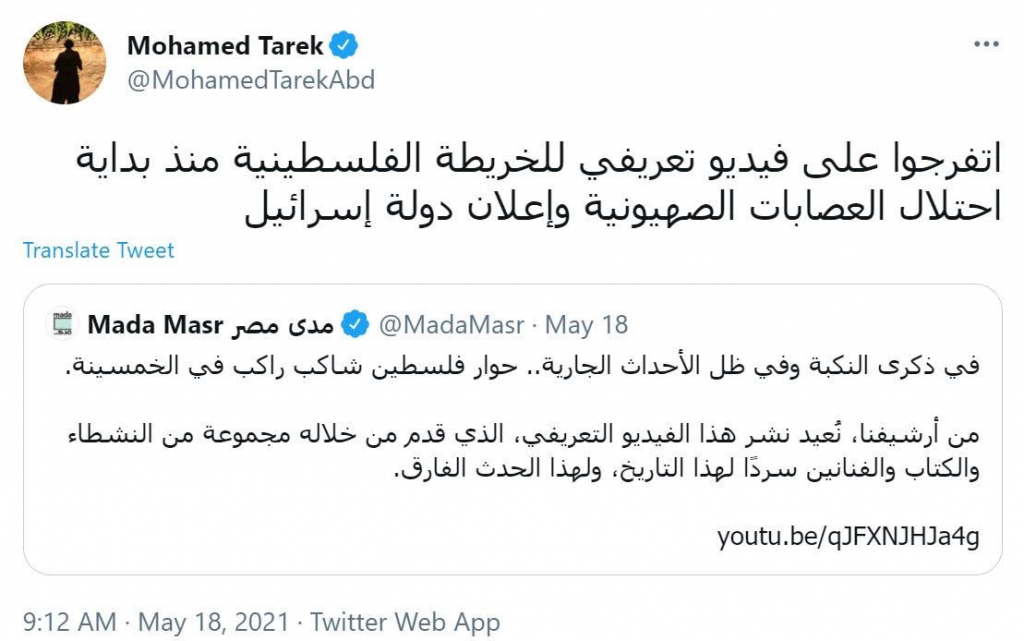 It appears that for Tarek, the “beginning of the occupation by Zionist gangs” was as early as the 19th century, since that is the onset of the video’s “narrative”. Content-wise, it is a rather standard anti-Zionist propaganda video, promoting misinformation about idyllic coexistence between religious communities under Ottoman and Muslim rule, Zionism being a sinister conspiracy, the artificiality of Jewish nationhood and connection to the land, absolving the Palestinian leadership of a long tradition of rejectionism and terrorism, erasing Mizrahi Jews from the story and more. The fact that a BBC producer publicly recommends it and calls it “informative” is hence worthy of note. 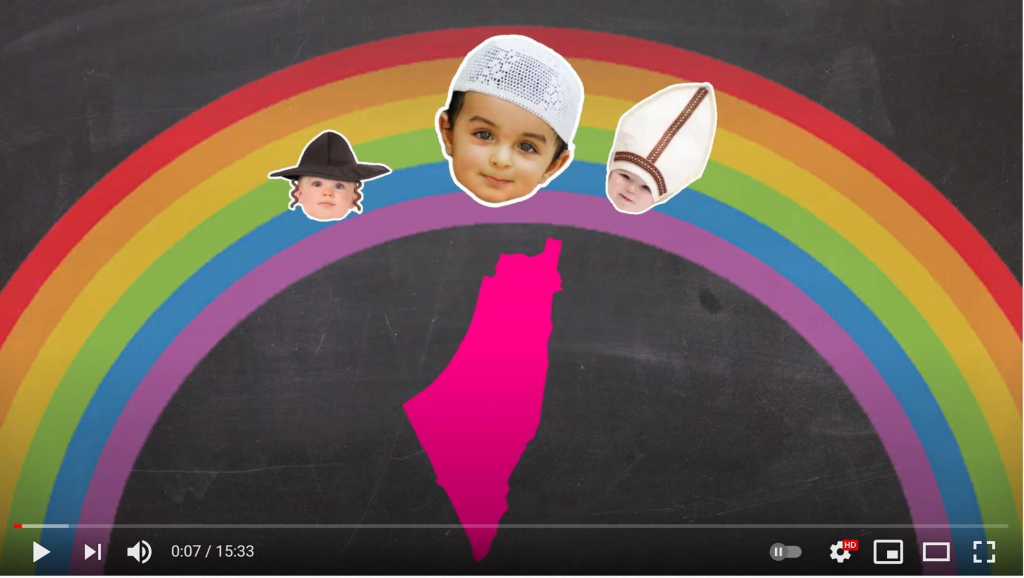 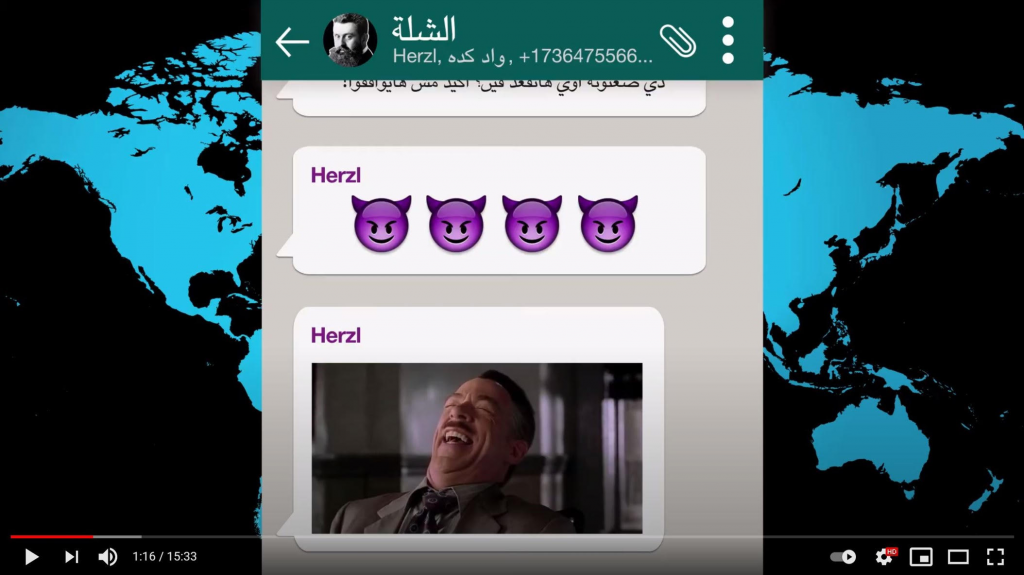 According to both her Twitter bio and personal website, London-based Abla Kandalaft has a long record of working for BBC Arabic and nowhere does she indicate the termination of that employment. 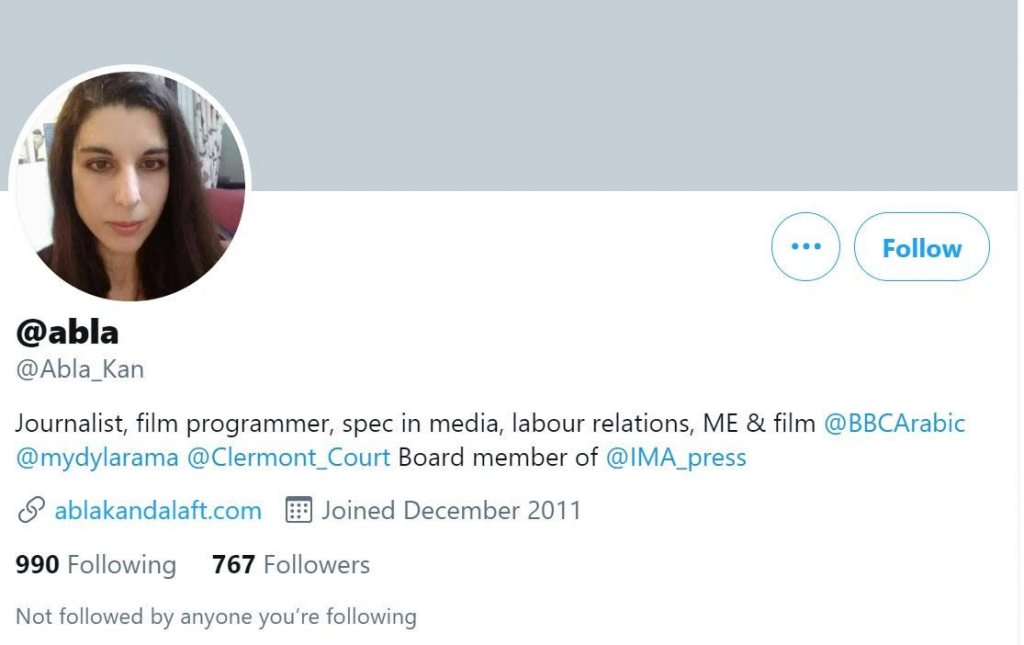 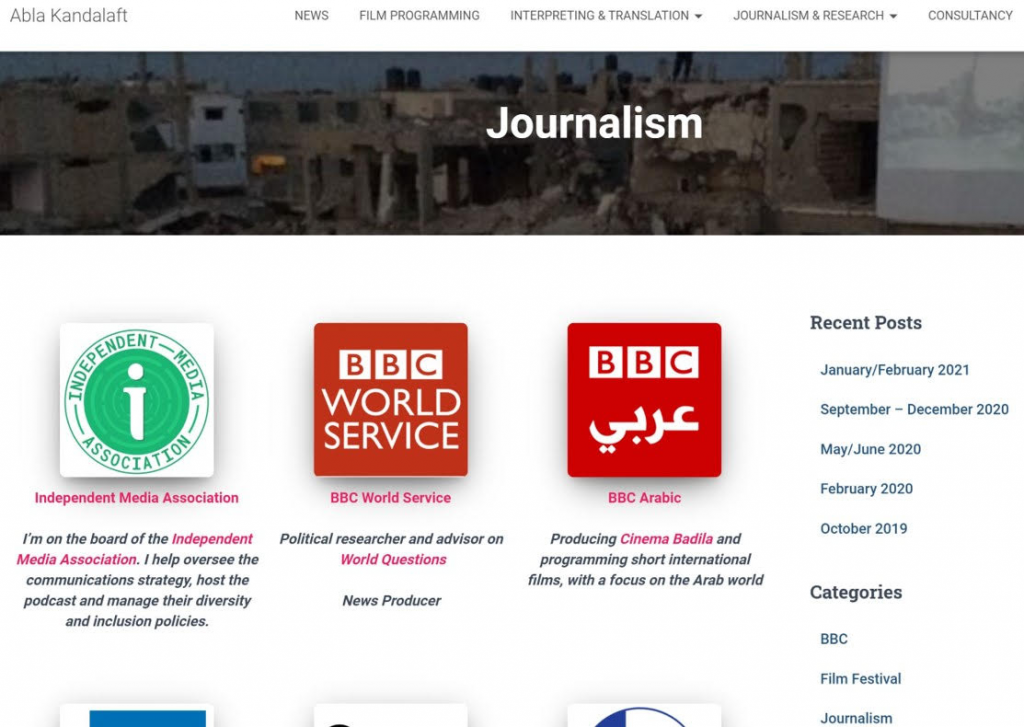 That, however, did not appear to be a concern as she relentlessly campaigned for BDS and anti-Israel protests during the recent round of escalation. 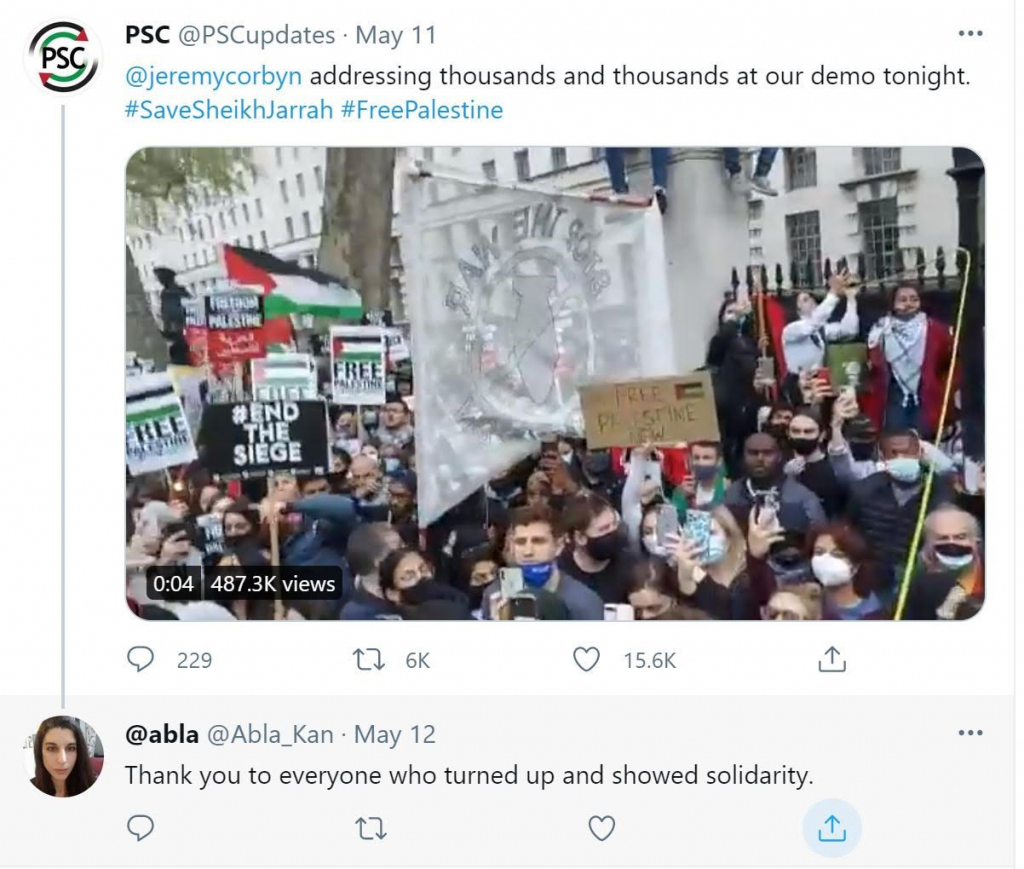 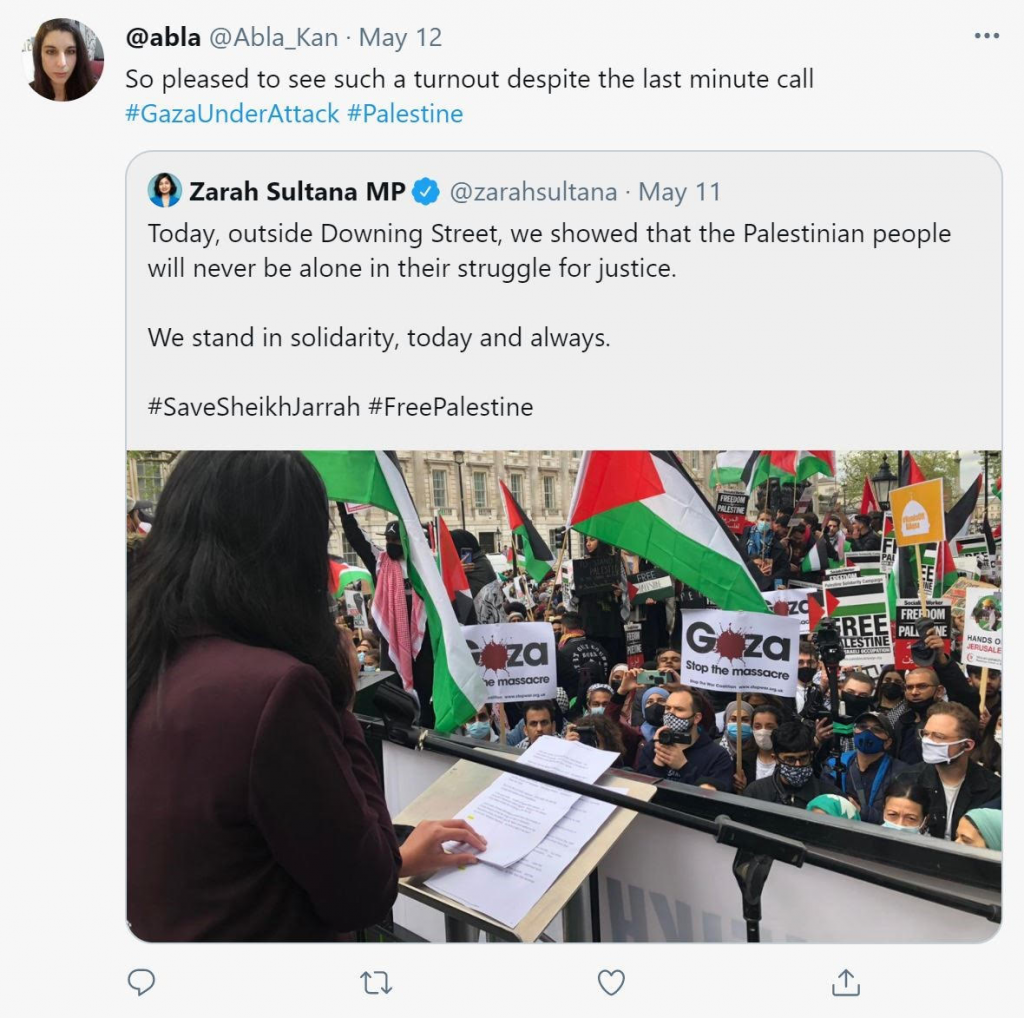 Throughout her May 2021 Twitter output, Kandalaft strongly opposed many journalistic and political concepts that she perceived as dangerous for the Palestinians and their just struggle. Among these are fact-checking, UK police neutrality (concerning the “Free Palestine” chanting policewoman), UNRWA showing signs of minimal integrity and basic reading comprehension.

She also felt the need to criticise an Israeli civilian posting about being under fire and to mock and dismiss an American Jewish journalist’s concerns about antisemitism. 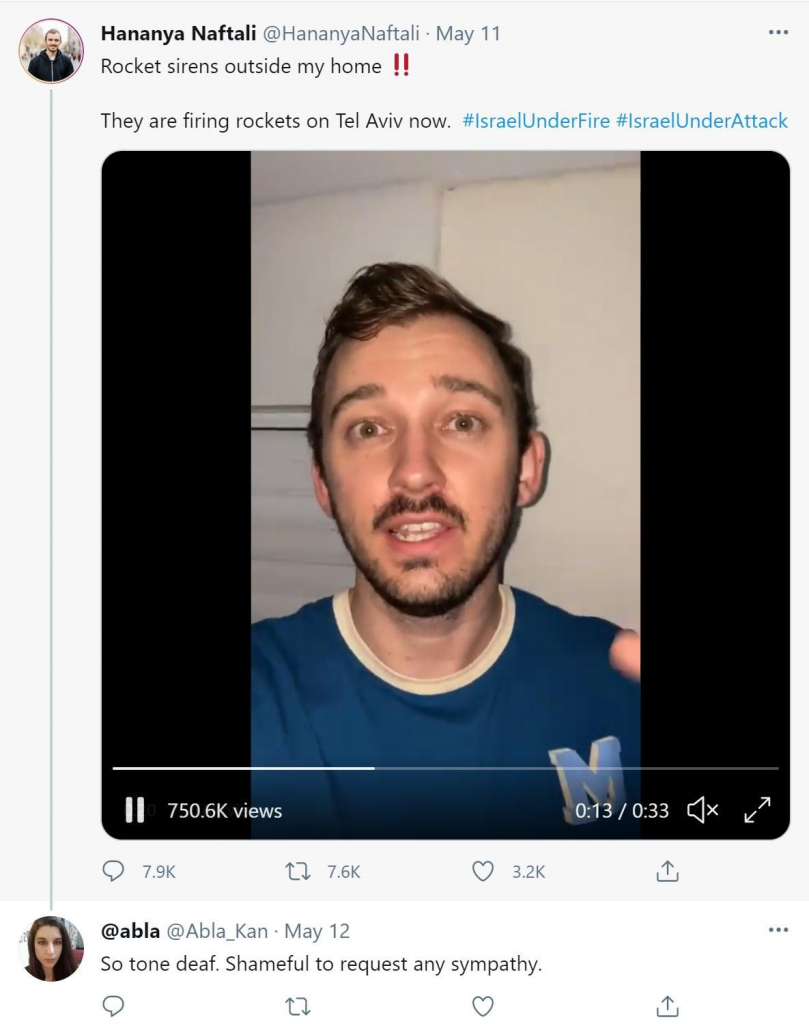 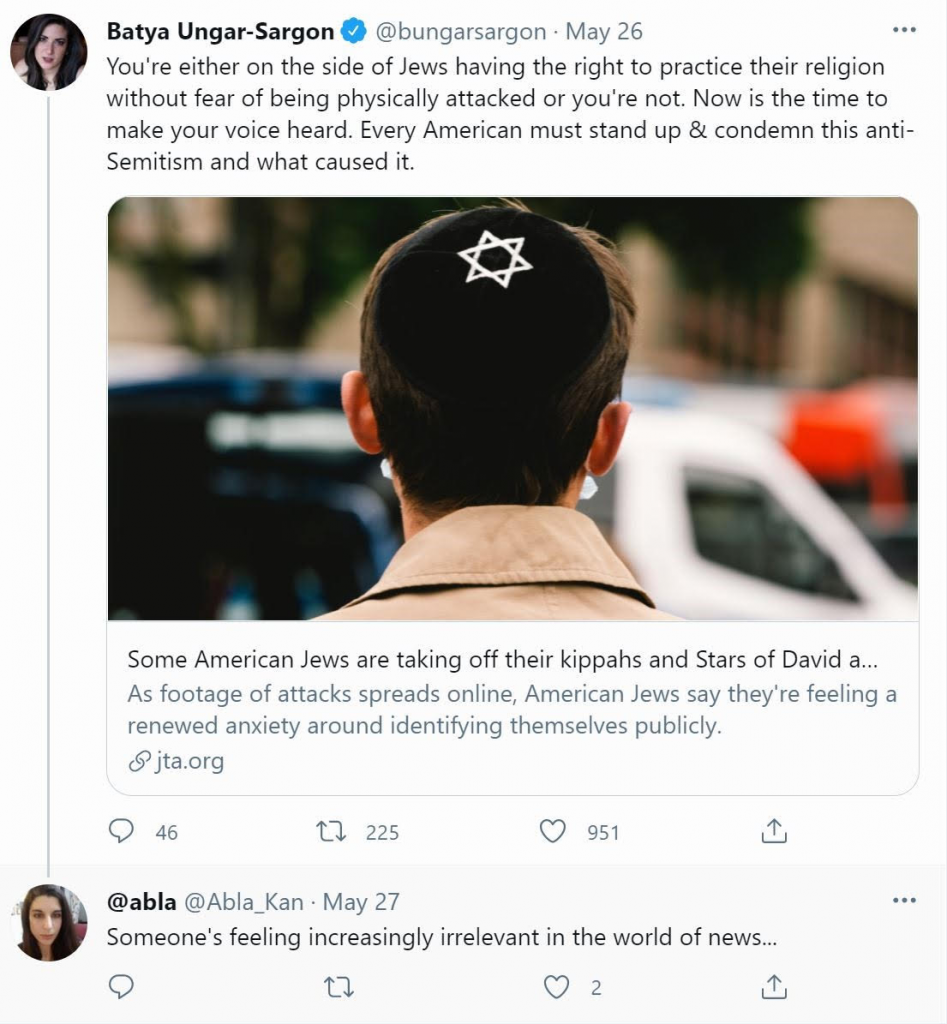 She even ridiculed the BBC’s coverage of the conflict. 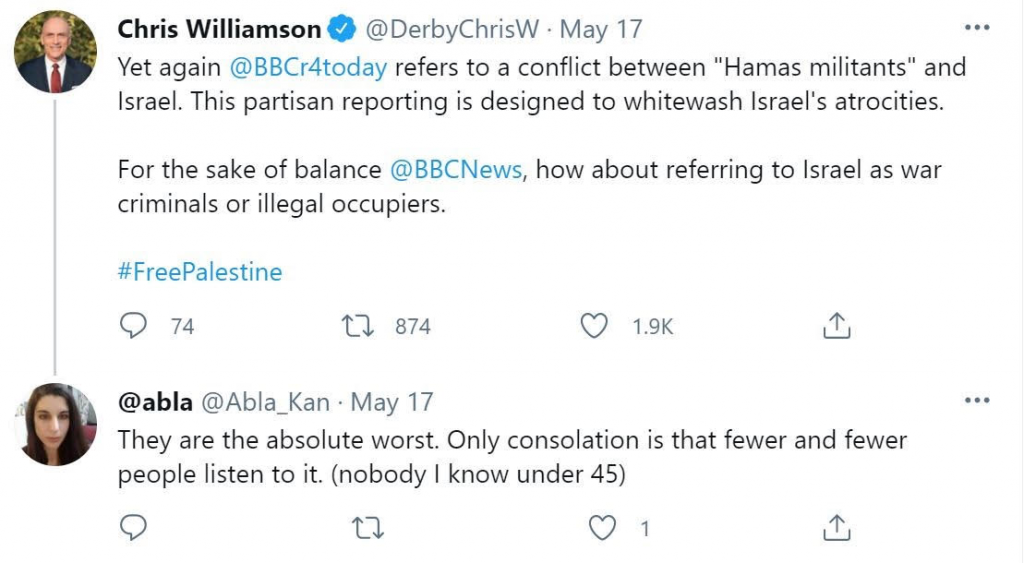 Deena Mostafa’s Twitter bio indicates that she still works for BBC (the most recent online item where she is mentioned by name is just under a year old). Despite her workplace’s explicit guidelines concerning use of campaign-oriented hashtags (quoted in full above), on May 8th she tweeted the following: 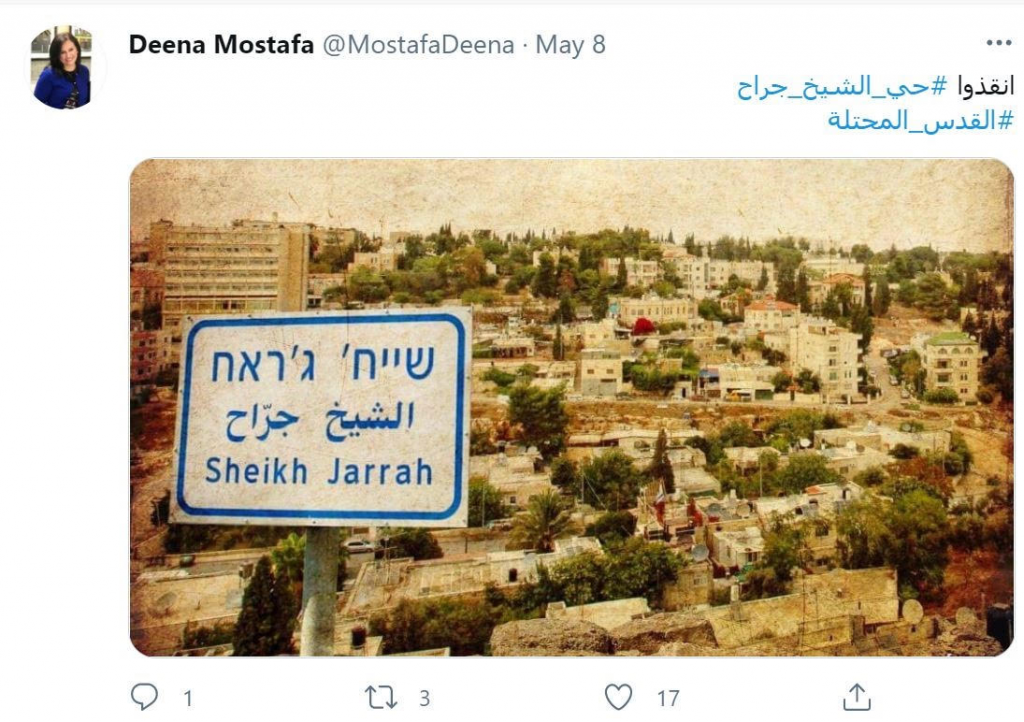 She also reacted to the strike on Gaza’s al-Shurooq tower by the IDF with the hashtag #IsraeliCrimes. The Arabic reads as follows:

“What is this barbarism? 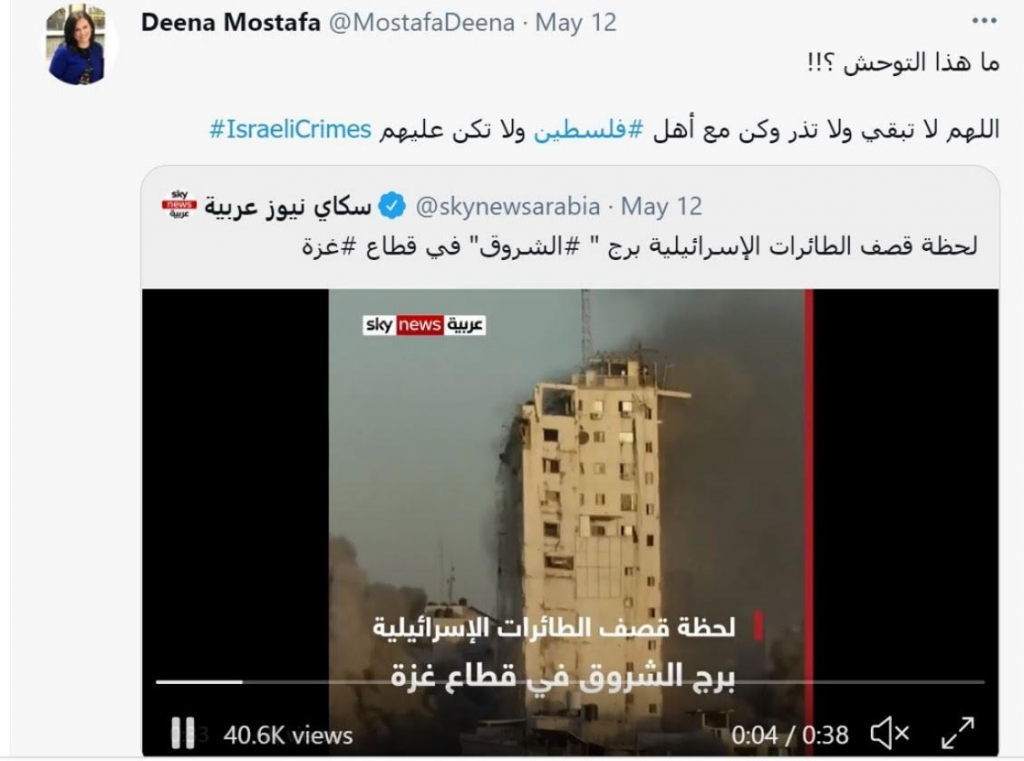 Sumaira Khan works for BBC Arabic as a “defense/foreign affairs” analyst both according to a January 2021 panel she attended online and her Twitter bio. Her analysis skills apparently include the ability to reduce a century-old conflict to four words and a picture: 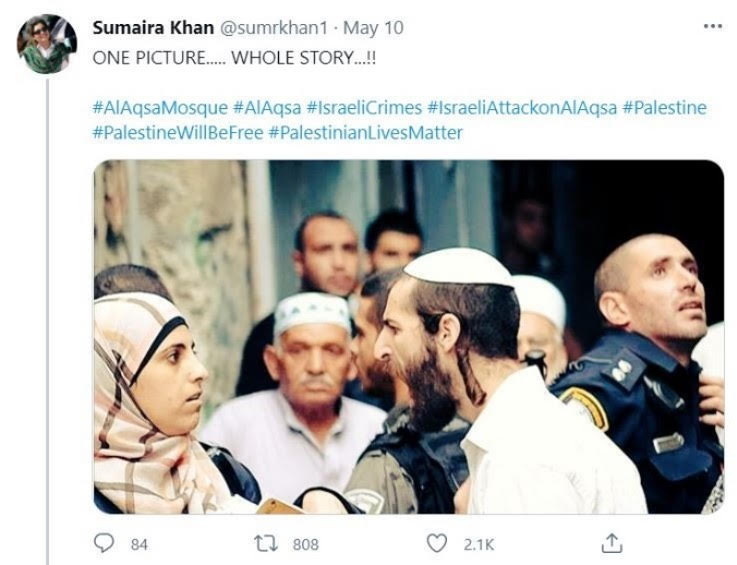 Other observations by Khan include the following (“Shaytan” means Satan): 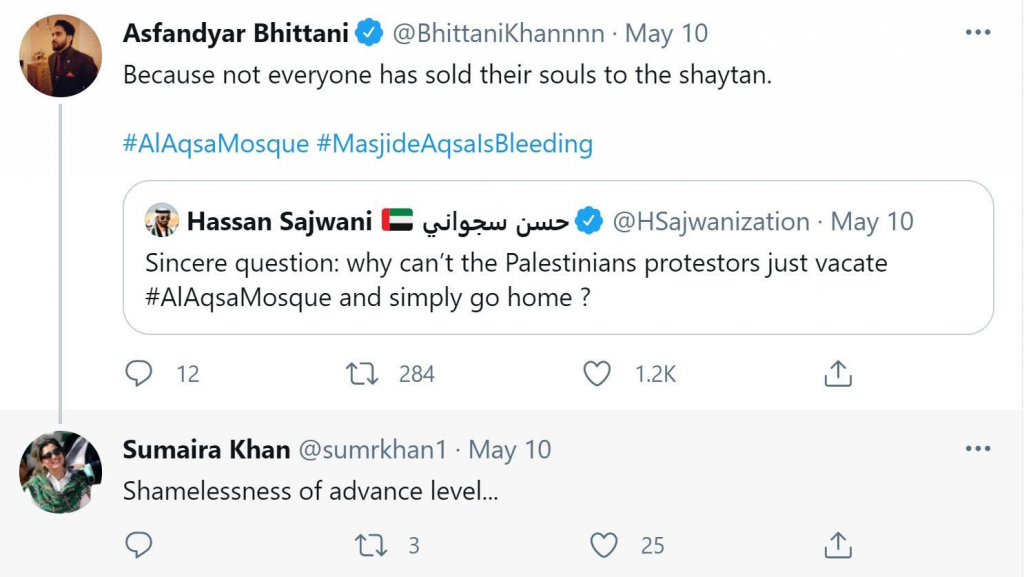 And (the Arabic/Urdu words express encouragement, similar to “Right on!” or “Way to go!”): 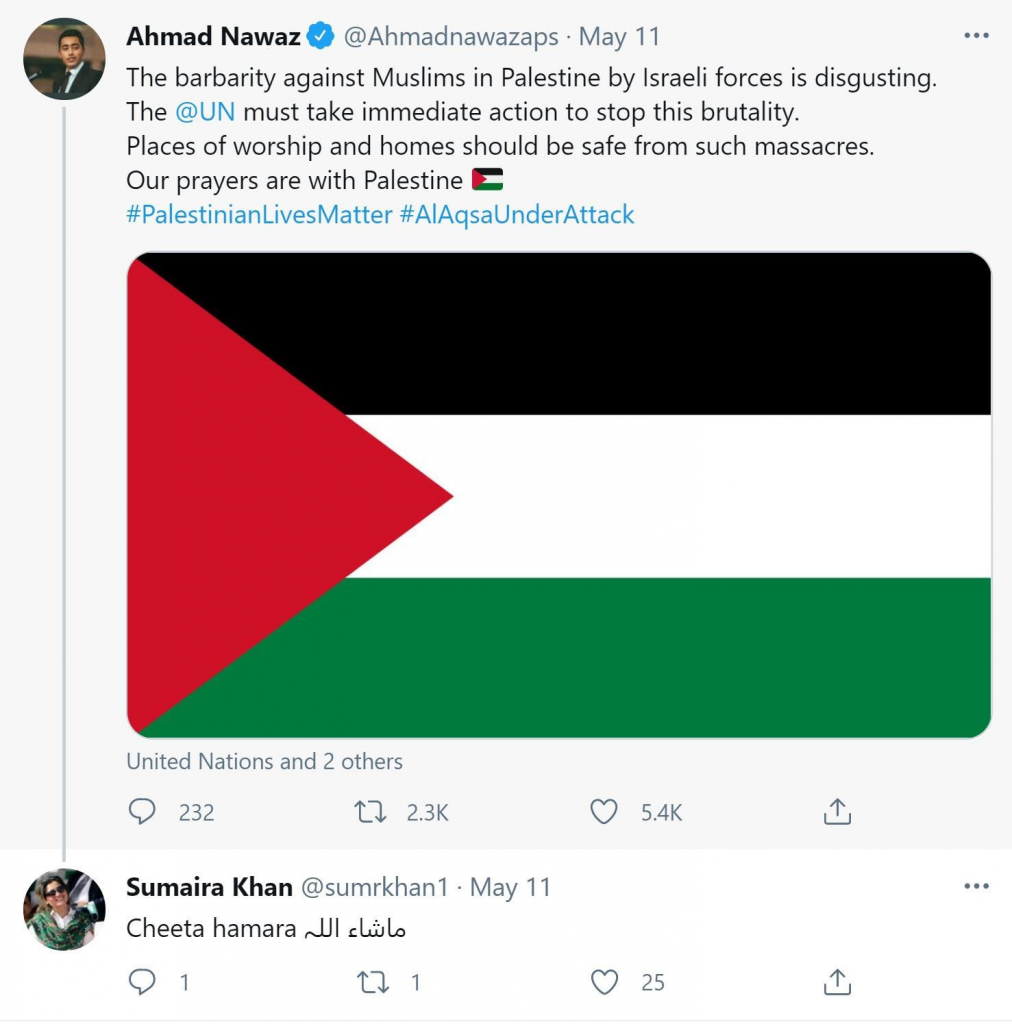 Readers may recall that last September the then new BBC Director General pledged to crack down on staff posting their views on social media in a bid to boost the corporation’s reputation for impartiality. The following month new guidance on social media usage was introduced.

“The BBC has issued new guidance on social media usage, which will force staff to maintain impartiality.

Employees will be told not to “express a personal opinion on matters of public policy, politics, or controversial subjects”.

Apparently that guidance is not particularly effective – and not only when BBC employees’ social media activity is carried out in languages other than English.