As we saw in a previous post, on June 15th BBC Radio 4 promoted an inaccurate explanation of the annual Jerusalem Day celebrations:

On the same day, the evening edition of the BBC World Service radio programme ‘Newshour’ advanced the same inaccurate claim. 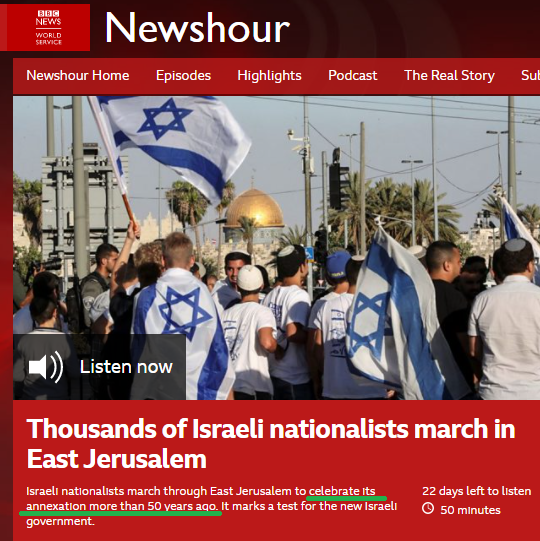 Presenter Tim Franks introduced that lead item (from 00:51 here) as follows: [emphasis in italics in the original, emphasis in bold added]

Franks: “We begin in Jerusalem, the city venerated by so many; a source of tensions so often. Today there’s been a large march by Israeli hard-line nationalists through parts of East Jerusalem to mark its annexation by Israel after the war in 1967. The last government, under former president [sic] Binyamin Netanyahu, had postponed what’s known as the flag parade until today which meant it would be an early test for the brand new administration. Remember, this is the first in twelve years not to be led by Mr Netanyahu.”

As noted here previously, Israel of course did not ‘annex’ the Old City or any other part of what the BBC chooses to call “East Jerusalem” in 1967. The Basic Law: Jerusalem, Capital of Israel was passed thirteen years later on July 30th 1980 and amended in November 2000. It does not include the word annexation.

Jerusalem Day – celebrated annually on the 28th of the Hebrew month of Iyar – in fact marks the reunification of the city on that day after the 19 years of Jordanian occupation that the BBC so carefully avoids mentioning in this item and in general.

Listeners then heard a report from the BBC Jerusalem bureau’s Yolande Knell in which they were told that “local medics said that more then 20 people were injured as stun grenades were used as well”. They were not informed of the rock throwing that took place during what Knell described as “confrontations” with “some Palestinians” which resulted in injury to two members of the security forces or that a “day of rage” had been declared in advance.

After Knell had cited negative statements on the topic of the Jerusalem march from the Palestinian Authority prime minister and Hamas, Franks introduced his interviewee (from 04:20), Yesh Atid MK and newly appointed deputy foreign minister Idan Roll.

Franks: “I first asked him what his view of today’s nationalist flag parade through East Jerusalem was.”

Roll: “The flag parade is a tradition in Israel. We’ve had this tradition for many years now. It’s an innocent parade where people – lots of teenagers – march with flags. It’s celebrating Jerusalem Day. It’s something…it’s part of our status quo; we’ve done it for so many years. The only difference…”

Franks [interrupts]: “Did you describe it as innocent?”

Roll: “Yes, because it’s civilians marching and they’re carrying flags. The only difference this year is that Hamas, which is a Jihadic [Jihadist] terrorist organisation, threatened to carry out terrorist attacks on Israeli civilians just for that.”

Obviously less interested in threats from a terrorist organisation, Franks continued to push his point.

Franks: “I don’t know if you’ve actually been present for any of these parades in the past but I mean innocent isn’t the adjective that would spring to my mind. I mean they can be very intimidating, they can have racist slogans chanted, there can be a bit of a rampage through the Muslim quarter of the Old City. It hasn’t been innocent in the past.”

Roll: “Well I think I’d like to differ, with all due respect, because as an Israeli and someone who was born in Jerusalem, I am well aware of the nature of these parades and when you are characterised this parade and you compare it to the other side which is a terrorist organisation, it’s hard…”

Franks [interrupts]: “Well I’m not…I’m not comparing it to anything. I’m just asking about it in itself. And I mean it was you who used that adjective of innocent and I’m just saying that if you’ve actually spent any time at these parades, innocent isn’t really what comes to mind.”

Roll: “The way I see the definition of innocent is when civilians, walking as a tradition with the state flag in the capital, celebrating Jerusalem Day, without weapons, without any guns or violence, that to me is innocent. That’s a tradition and it’s part of our culture and part of us celebrating the State of Israel.”

Franks then moved on to another topic, asking Roll to “tell me what’s going to be different in this government when it comes to foreign policy?”

After Roll pointed out that the new government was only two days old and that some foreign policy planning was still in progress, Franks asked “what policy will be vis-à-vis the Palestinians” and went on to paraphrase the new prime minister.

Franks: “Naftali Bennett […] has said […] for Israel to allow Palestinians a state would be an act of national suicide.”

Roll: […] “Things are more complicated than that. Israel is always looking for peace as I said but the obstacle for an agreement with the Palestinians doesn’t lie with us. It lies with Hamas…”

Apparently not prepared to discuss the topic of Palestinian agency and responsibility for half of any peace process, Franks interrupted his interviewee once again and went on to promote more of his own talking points.

Franks [interrupts]: “You’ve made those points before. But in terms…I mean you’re suggesting that Israel has absolutely no agency and that…let’s…let’s take a very small issue in a way which you will have to confront at some point soon and that is the presence of Israeli settlers in what are called illegal outposts. I mean in other words illegal even under Israeli law, let alone international law. This government will be tested, as many other governments have been, by the presence of these families in hotly disputed land in the West Bank. What do you think should be done with people who move – against Israeli law – into unauthorised outposts?”

Franks was clearly in fact uninterested in Roll’s answer, cutting him short before he had completed even one sentence on the topic of the new government’s policy and moving on to ask a long  question – again replete with his own talking points – the topic of Iran.

Following Mr Roll’s response, Franks ended the conversation. Listeners may well have been left with the impression that the interview was more designed to promote the interviewer’s own predictable messaging than to allow BBC audiences to hear from a member of Israel’s new government.