Five months ago we documented issues arising from a January 24th interview with the then Israeli minister of health Yuli Edelstein on the BBC One programme ‘The Andrew Marr Show’: 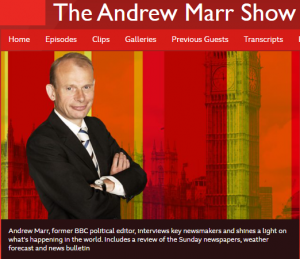 Among those issues was Marr’s claim that “The United Nations says it’s your legal obligation to make sure the Palestinian people under occupation have a swift and equitable access to Covid-19 vaccinations”. As noted at the time, the source of that statement was not “the United Nations” but two UN special rapporteurs for the notoriously anti-Israel UN Human Rights Council who are not United Nations staff members, one of whom has a long record of anti-Israel activity.

Another issue was Marr’s misrepresentation of the Fourth Geneva Convention, which of course does not include the word Israel.

Marr: “…but the Palestinians have asked you for vaccines and you haven’t given them some and under the Geneva Convention – the Fourth Geneva Convention – Israel is required to do so. I can read it back. Article 56 says that Israel must adopt and supply the prophylactic and preventative measures necessary to combat the spread of contagious disease and epidemics in cooperation with the local authorities. Now that means the vaccine. Why aren’t you giving them the vaccine?” [emphasis added]

Mr Jonathan Hoffman made a complaint to the BBC on those points and others two days after the programme was aired. Having received an unsatisfactory response from BBC Complaints, he made a Stage 1b complaint in February.

Over four months later – and five months since the programme was broadcast – the BBC has published the following on its ‘Corrections and Clarifications’ webpage: 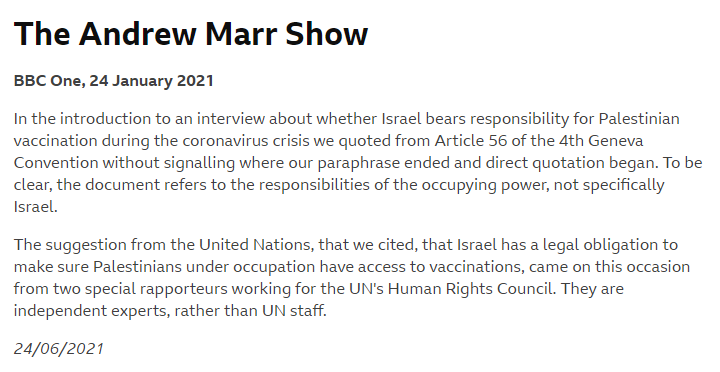 However, that correction is not currently displayed on the relevant BBC iPlayer page where the original programme will continue to be available for the next six months.

Moreover, as we saw only last week the BBC has persisted in portraying the statement put out in January by the two UNHRC special rapporteurs as though it came from the United Nations.