As we all too often have cause to note on these pages, BBC coverage of internal Palestinian affairs is sporadic to say the least.

BBC audiences had seen no reporting whatsoever on the renewal of a crackdown by security forces on critics and rivals of the Palestinian Authority that has been evident since Mahmoud Abbas cancelled the scheduled elections in late April until the death of Nizar Banat on June 24th.

That story was covered in a written report published on the BBC News website’s ‘Middle East’ page under the headline “Activist critical of Palestinian Authority dies after arrest” but no proper context was provided concerning the preceding spate of arrests beyond one general paragraph: 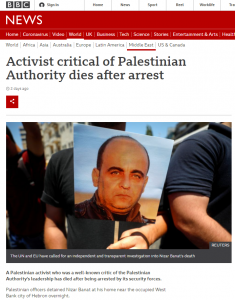 “Human rights groups have accused the Palestinian security forces, which receive international funding, of routinely arresting and torturing peaceful critics and opponents to crush dissent. However, deaths in custody are rare.”

“He [Banat] was a candidate on the Freedom and Dignity electoral list for the Palestinian legislative elections, which had been due to take place last month but were postponed by President Mahmoud Abbas at the end of April amid a dispute over voting rights in East Jerusalem.”

It also amplifies the PA’s narrative concerning its recent about-turn on Corona vaccines provided by Israel:

“Mr Banat denounced the PA on Monday over a deal that would have seen Israel give the Palestinians at least one million soon-to-expire coronavirus vaccines in exchange for a similar number of doses from a shipment that the Palestinians are expecting later this year.

The PA swiftly cancelled the deal when the first batch of jabs arrived from Israel, saying they were nearer to their expiry date than expected.”

In fact, as reported by the local media on June 18th, the “at least one million” vaccines were not “soon-to-expire”:

“The Ynet news site said the vaccinations transferred to the Palestinians on Friday were good until the end of June and July, with Israel deliberately sending those first so they would not be wasted. The rest of the vaccines set for delivery have a later expiration date and were good for several months.”

In contrast, listeners to the afternoon edition of the BBC World Service radio programme ‘Newshour’ on June 24th were provided with better context to the story when presenter Paul Henley interviewed Hugh Lovatt of the ECFR (from 30:04 here).

Lovatt noted that Banat “has been very outspoken against the Palestinian Authority, calling out, you know, I think its rising autocracy but also rising corruption which is something that actually I think a majority of Palestinians also believe.”

Later on, Henley specifically requested background to the story. [emphasis in italics in the original, emphasis in bold added]

Listeners to the evening edition of the same programme – presented by Tim Franks – heard an item about the same story (from 14:05 here) introduced as follows:

Franks: “There’ve been angry demonstrations in the Palestinian city of Ramallah in the occupied West Bank, with the anger directed towards the leadership of the Palestinian Authority. Earlier this morning a prominent critic of the PA, Nezir [sic] Banat, died after being arrested by Palestinian security forces in Hebron. His family say that he was severely beaten when officers raided his home. Ubai Aboudi is a human rights activist from the Bisan Center for Research and Development in Ramallah and he was a friend of Nezir [sic] Banat.”

Nevertheless, listeners to this item were not told that the provider of the sole account of the story – who twice made references to “the Israeli occupation forces” – has rather more on his résumé than the term “human rights activist” (a description repeated by Franks at the end of the item) would suggest to the average audience member. 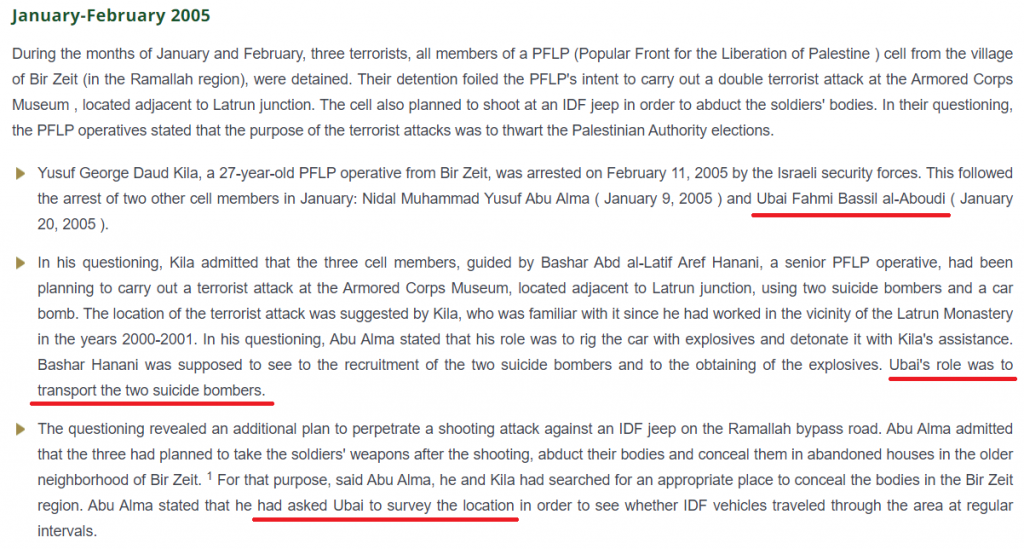 Aboudi’s Linkedin profile describes him as also working for an NGO called UAWC. 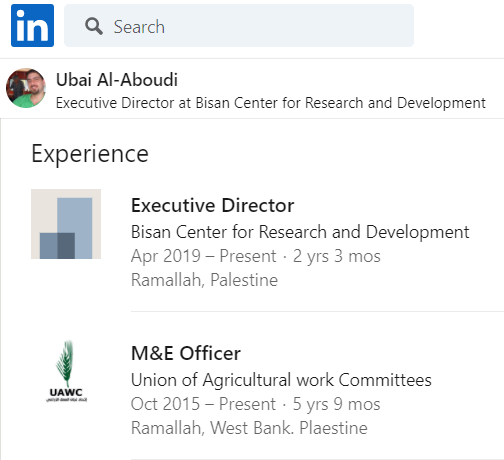 Any member of a BBC production team researching UAWC before soliciting a contribution from Aboudi would quickly have discovered that it has ties to the PFLP, which is listed as a terrorist organisation by Israel, the EU and the US.

In December 2019 the Israel Security Agency announced that it had arrested fifty members of the PFLP in the wake of the August 2019 terror attack near Dolev in which 17-year-old Rina Shnerb was murdered and her brother and father seriously wounded.

The leader of the cell that carried out that attack – Samer Arbid – worked for UAWC, as did Abdul Razeq Farraj who was also involved in the attack. NGO Monitor reported at the time that:

“The identities of the majority of the 50-person terror network have not been made public. On November 13, 2019, Israeli authorities arrested another NGO official, Ubai Aboudi, Executive Director of Bisan Center for Research & Development. According to Arab media, on November 18, Aboudi was sentenced to four months of administrative detention. Furthermore, in Abdul Razeq Farraj’s indictment, Aboudi is referred to a PFLP member who met with Farraj in September 2019 where Farraj told Aboudi to recruit more members to the cell.”

And yet, the best description that the ‘Newshour’ team could come up with for an interviewee arrested three times because of membership and activity in a terrorist organisation was “human rights activist”.