On June 21st the BBC World Service radio programme ‘Business Daily’ aired an edition titled “The economic life of Gaza” which is described as follows in the synopsis: 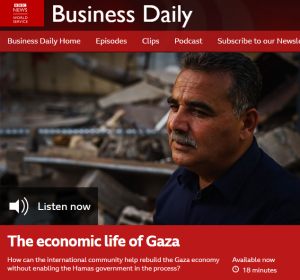 “Israel’s military says it struck a thousand targets in Gaza last month, in response to more than 4,300 missiles it claims were fired into Israel. With the latest bout of violence now over, the reconstruction can begin once again.

Manuela Saragosa speaks to Samir Mansour, who saw his famous Gaza bookshop destroyed before his eyes. International donors want to help rebuild businesses like Samir’s. Elizabeth Campbell, director at the United Nations Relief and Works Agency for Palestine Refugees in the Near East, describes how this can be done without also enabling the Hamas government, which is labelled a terrorist group by the US, EU and Israel.

Israel and Egypt maintain a blockade on Gaza that has rendered commerce with the outside world almost impossible. But could the economy have great potential, were the blockade ever lifted? Asmaa AbuMezied of Oxfam points to Gaza’s fledgling startup scene, while Manal White of the social enterprise Zaytoun in London highlights the opportunity for Gazan agricultural exports.” [emphasis added]

A slightly edited version of the same report was aired in the June 21st edition of the BBC World Service radio programme ‘World Business Report’ (from 16:01 here).

“Also in the programme, the BBC’s Manuela Saragosa asks how Gaza might go about reconstructing, following last month’s violence between Israel and Hamas.”

At no point in the eighteen-minute item (which will remain online for “over a year”) were listeners informed that Hamas and other terrorist organisations initiated “last month’s violence” by firing rockets at Israel’s capital city. [emphasis in italics in the original, emphasis in bold added]

Saragosa: “A fragile ceasefire means that eleven-day volley of rockets and airstrikes between Israel and Hamas in Gaza in May this year is now over. […] The latest conflict destroyed or damaged thousands of homes in Gaza as well as schools, hospitals and vital infrastructure such as water and electricity. The Israeli military says it attacked more than 1,000 militant targets in response to rockets fired out of the territory. There were casualties on both sides: 256 killed in Gaza according to the UN and 13 people killed in Israel. It’s now down to the international community to finance Gaza’s reconstruction.”

Remarkably, at no point in the programme did Saragosa question the ‘business model’ whereby a terrorist organisation initiates a conflict with Israel every few years knowing full well that others will pay for “Gaza’s reconstruction”.

Saragosa’s first interviewee was Samir Mansour whose Gaza City bookshop was destroyed in the hostilities on May 18th.

Saragosa: “…then, on an early morning in May this year, at the height of the hostilities between Hamas and Israel, Samir was watching the news and saw that the area his bookshop is in was about to be hit by an Israeli airstrike.”

Saragosa’s account did not include the fact that Mansour received a warning phone call from the IDF or that the multi-storey building in which his shop was located was also used by Hamas to produce weapons and gather intelligence.

Much of the programme was given over to an interview with the director of the UNRWA office in Washington DC, Elizabeth Campbell, who took great pains to repeatedly stress that the organisation operates under “international accountability standards”.

Campbell: “To underscore, UNRWA is completely independent from any government entity, from any political actor including especially Hamas and we do not coordinate with them or work together with them in any way and we have long-standing safeguards in place to ensure that our money and our operations are not politicised by anyone.”

Saragosa could have told listeners that on May 23rd UNRWA’s then director of operations in the Gaza Strip gave an interview in which he said:

“You cannot work in a place like Gaza without coordinating with the local authorities; that’s true for any autocratic regime of this nature. My hope is that as our plans become clear, resources come in, they [Hamas] will give us – or allow us – the humanitarian space we need to get our work done.”

She could also have pointed out that the first thing his replacement did was to meet with Hamas’ leader Sinwar.  Instead – again apparently unperturbed by a ‘business model’ that saves a terrorist organisation financial outlay on social services – she continued:

Saragosa: “So if UNRWA does not operate with Hamas in any way, how do you channel that money into Gaza, given that Hamas controls Gaza?”

Campbell: “So we run a school system, a healthcare system and a food distribution system and those systems are completely independent from anything in which Hamas is involved. So our school system is run by our teachers, hired by UNRWA, trained by UNRWA. It’s the same with our healthcare system and our food distribution. We have a robust relationship with our donors and share regularly with them all types of information including about our staff to ensure that…ehm…the integrity of our operations.”

Saragosa’s avoidance of any questioning of those claims is of course particularly noteworthy given the past history of Hamas domination of the UNRWA employees union.

Saragosa then shifted focus to the topic of counter-terrorism measures which were not properly explained.

Saragosa: “In the meantime though, Gaza is subject to an Israeli and Egyptian blockade, with Israel repeatedly saying that building materials going into Gaza were diverted to build a network of Hamas tunnels. Everything and everybody going into and out of the territory is now controlled and Israeli checks were tightened after Hamas reinforced its power in Gaza back in 2007. But the blockade is an effective straitjacket on Gaza’s economy.”

Listeners heard nothing about the terrorism that made the restrictions necessary and neither Saragosa nor Campbell had anything at all to say about the possible effects on Israeli citizens of the proposals promoted by the latter.

Campbell: “I mean to be able to bring the economy back it would require an easing of the land, sea and air blockade, a movement of people to access employment and to generate income. That is absolutely what is required to reverse the trend of, you know, mushrooming unemployment that now stands high above 50% and also to give young people, who are highly educated – many of whom have obtained a university degree – a chance, an opportunity, a future, something productive to engage in. Those political conditions will have to change to begin to address the root of the challenge there.”

According to latest figures published by the Palestinian Central Bureau of Statistics, Gaza Strip unemployment for the first quarter of 2021 stood at 48 percent, not “high above 50%”.

Neither Saragosa nor Campbell bothered to adequately clarify to listeners that the anti-terrorism measures including the blockade would not be necessary were terrorism from the Gaza Strip to cease.

Saragosa: “I mean I know last year the UN put out a report saying what the cost had been of the blockade in terms of poverty levels, in terms of just the cost of the economy there. I just wonder what the potential is really.”

Campbell responded that the potential is “extremely high”, adding:

Campbell: “What is needed is really an easing of the blockade to allow for a greater movement of people and goods to start to rebuild the economy there.”

Once again, the potential outcome of that ‘prescription’ on the physical and economic welfare of Israeli citizens was not discussed.

Both of the two additional interviewees in this programme promoted the same ‘solution’ to the Gaza Strip’s economic problems. Listeners heard from Oxfam’s Asmaa Abu Mezied without any clarification being provided regarding that organisation’s anti-Israel activity.

Saragosa did ask one relevant question which was side-stepped by her interviewee:

Saragosa: “How many people just want to see an end to Hamas being there? Because in the end, that blockade exists because of Hamas.”

Abu Mezied: “I think that what the people want, whether they are civilian employee or, like, businesses is to have and to live in a free…to live in a freedom with a dignified life.”

Saragosa: “So was economic life easier before Hamas took control?”

Abu Mezied also claimed that in the 1950s and 1960s Palestinians “were exporting citrus to Eastern Europe” but failed to clarify that the Gaza Strip was occupied by Egypt at the time before going on:

After alleging that Palestinian agriculture “has been deteriorating because of Israeli control over resources, water, in Gaza and in West Bank”, Abu Mezied’s agenda – which is clearly not limited to counter-terrorism measures imposed on the Gaza Strip – became even more apparent.

Abu Mezied: “The question should be how Israeli occupation policies are hindering the growth of the Palestinian economic and prosperity.”

The final interviewee was Manal White of the British organisation Zaytoun who likewise used the political term “the occupation” to describe Israel, claimed that the Gaza Strip is occupied and asserted that if there was no blockade, Gazans “could have water and electricity”. Saragosa failed to inform listeners that part of the supply of those utilities is provided by Israel.

Manuela Saragosa made no effort to ensure that BBC audiences heard any alternative views to the monochrome talking points promoted by three interviewees chosen to participate in this report and no Israeli voices were given a platform at all.

After past rounds of conflict we saw similar BBC amplification of one-sided campaigns against the anti-terrorism measures imposed upon the Gaza Strip in order to protect Israeli civilians. Saragosa simply rehashed the same superficial format, making no effort to bring listeners any new perspectives or information.

ANOTHER UNRWA STORY IGNORED BY THE BBC

FOLLOW UP ON A GAZA STORY IGNORED BY THE BBC