On June 28th the NGO ‘Save the Children’ put out a press release promoting a report (which includes a foreword by UN special rapporteur and anti-Israel activist Michael Lynk) that it published on the same day.

Bright and early on the same morning (UK time) the BBC World Service radio programme ‘Newsday’ devoted over five minutes (from 14:03 here) to uncritical and context-free amplification of that report which, according to the relevant webpage, will remain available online for “over a year”.

Presenter Clare McDonnell introduced that item with a politicised, partisan and simplistic caricature of the story: [emphasis in italics in the original, emphasis in bold added]

McDonnell: “Let’s take you to East Jerusalem now where tensions continue there because Palestinian residents face eviction to make way for Jewish settlers and a report out today claims that four out of five children whose homes in the West Bank and East Jerusalem were demolished by Israeli authorities say they feel socially isolated and abandoned. The report is from the charity ‘Save the Children’. Twelve-year-old Leen is from East Jerusalem. In the area where Leen lives with her family there are 88 homes currently under threat of demolition by the Israeli authorities.”

The recording that listeners then heard (with a voiceover) was actually provided in the ‘Save the Children’ press release but that fact was not communicated to BBC audiences.

Voiceover: “My name is Leen. I am in the 6th grade. I live here in Silwan with my mum, dad and four sibling. Our homes are not very large. In the area outside our home I don’t feel safe because there’s a lot of police and they fire bullets and gas grenades. They scare me a lot. I want to become an architect so I can build a home for the poor and the people that don’t have homes. And I also would like to become a flight attendant because it looks like fun. The home I want to build for the people who don’t have homes will have a pool and other nice things so that they enjoy themselves.”

As we all too often have cause to note on these pages, BBC editorial guidelines on impartiality include a section concerning ‘Contributors’ Affiliations’.

Nevertheless, McDonnell made no effort to inform listeners of the long-standing record of anti-Israel campaigning by ‘Save the Children’ or the fact that prior to her employment with that NGO, the interviewee from whom they were about to hear at length worked for the PFLP-linked Palestinian NGO ‘Addameer’.

McDonnell: “Well Lana Ramadan is senior advocacy and campaigns officer for ‘Save the Children’ in occupied Palestinian territory and she joins us now live from Ramallah. […] Just hearing the aspirations of that young girl there, it’s pretty heart-breaking, isn’t it? To put the politics aside for one moment and look at how this whole situation is impacting on young lives: was that a familiar story you heard?”

Ramadan: “Ehm…yeah actually I met Leen a few weeks ago and she told us a lot about her dreams and hopes that really should be protected and fulfilled. She’s now living in a neighbourhood – al Bustan neighbourhood of East Jerusalem – that is actually facing a threat of demolition. Some families in that neighbourhood are waiting for their homes to be demolished at any moment now after a period of 21 days have finished that were given to them to evacuate or self-demolish.”

Neither at that point nor at any later juncture in the item were listeners provided with any context or explanation as to why demolition orders have been issued for some buildings in that particular neighbourhood in Silwan.

The story actually began many years ago and a clue is found in the name of that neighbourhood in Silwan (Kfar Shiloach) – al Bustan. Bustan means ‘grove’ and the area apparently got its name because during Ottoman and British rule it was kept as a tree-filled area with no structures. In Hebrew the area is known as the King’s Garden (Gan HaMelech) and is it associated with King David and King Solomon.

Back in 2010 Israel’s State Comptroller issued a report concerning illegal building in that and other areas in Jerusalem.

The King’s Garden (Gan Hamelech) is the Hebrew name for an area of some 11 acres about half a kilometer south of Jerusalem’s Old City, between Ir David and Silwan. Jerusalem authorities have a plan to demolish 22 structures to make way for a tourist park, while another 66 structures will be granted a post factum building permit. […]

According to the report, law enforcement against illegal structures began only in 1995, but even then with little effect – nine years later there were 80 illegal structures. Authorities began legal proceedings against 43, but only 10 were demolished. Meanwhile, new buildings were constructed.

In 2004, authorities boosted law enforcement efforts in the area, which is part of a recognized antiquities site. Nevertheless, the number of illegal structures had reached 130 by 2009, mostly just single-storey or two-storey buildings.”

The scale of illegal construction can be seen in a presentation of the plans for the area produced by the Jerusalem Municipality in 2010. 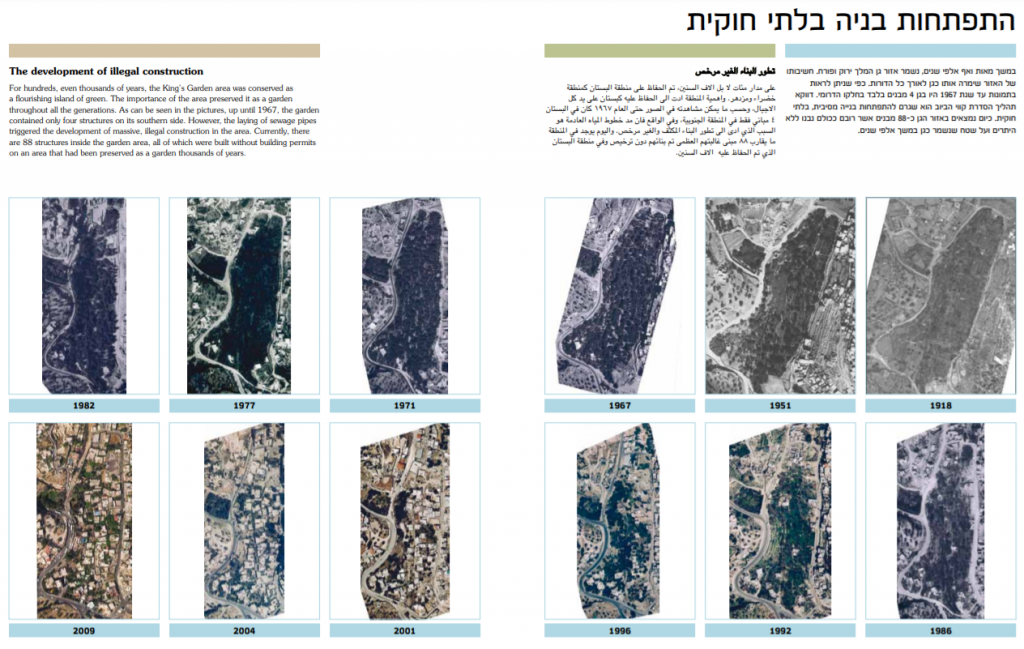 The plan included new housing for residents of the area:

“According to the plan, Gan Hamelech would be completely renovated, with a large swath of houses located at the base of the Kidron Valley torn down to make way for a national park. Residents would be relocated during the construction and then moved into new four-story apartment buildings, built along the park’s edges.”

Residents however opposed being rehoused and the much politicised issue has been the subject of court cases ever since.

“Palestinian residents said an additional 17 illegally built structures — including homes — have demolition orders in effect. The municipality has marked another 80 homes for demolition, but those orders are currently being fought in the courts. […]

According to a former Jerusalem municipality official, al-Bustan’s Palestinian residents have rejected numerous offers by the city to accept compromises that would leave most of the homes in place.

“Every year, we would go to the courts to update them on the negotiations with residents, and ask for an extension of the freeze [in demolitions]. At a certain point, the court decided that these were going nowhere,” said the former official.”

None of that obviously highly relevant background was provided to BBC World Service radio listeners as Ramadan’s politically motivated talking points continued to be amplified unchallenged with cues from McDonnell. At no point were listeners told that the names used by Ramadan were – according to the ‘Save the Children’ press release – changed.

McDonnell: “And what kind of effect is this having on those children psychologically? To be sitting in a home that you may not be…you know, you’re sitting on a ticking time-bomb essentially, aren’t you? A court has ruled that, you know, you’re there illegally – what anybody thinks of that is the politics again – but you have to quit. So what impact is it having on these children?”

Ramadan: “One of the young boys we consulted told us that nobody stopped them or could stop them again from destroying our home and lives so why should I bother to dream about a better future. That was Fadi who is 16 years-old. You know the findings of our research go beyond the initial trauma of losing their homes. The resulting dispossession and displacement cripple the children’s sense of safety. It leaves them with severe emotional distress and leaves them isolated from their friends and communities. 80% of the children we consulted feel abandoned by the world and have lost faith in the event of anyone to  provide support and protect their rights. This includes their parents, the authorities and even the international community. They feel scared, powerless and disempowered. And those effects don’t only affect the children but also their families. The parents also feel powerless and unable to protect their children after losing their home. 80%…”

McDonnell: “I just wanted to ask you – sorry to interrupt – on a practical level – you know we’ve reported on this many times, you know, on the East Jerusalem neighbourhoods like Sheikh Jarrah and Silwan, on these families facing eviction. Once they are evicted, these children along with their families, where do they go? How does that practically interrupt their lives? Can they continue with their education? What happens?”

Ramadan: “Well…ehm…most of the children we’ve met…ehm…I remember one of the boys I met, he’s told me we have nowhere to go and we’re gonna stay here. But from what we know, from the research, many of those families are of course forcibly transferred. They go to other family members to live with, they go to neighbours, they go to other places to live and temporarily. I mean one of the boys we consulted, his name is 14 years old [sic] and he said we keep moving around and find somewhere to live and the instability is driving me crazy. Their education is interrupted. They feel unsettled. They feel there’s no stability and they also sometimes are forced to work. I mean Omar 14 years old said that their living conditions are really worse now and that he has to work in a street corner to help his mother which is the main provider of the family.”

McDonnell: “Lana, thank you so much for the update. Lana Ramadan there: senior advocacy and campaigns officer for ‘Save the Children’.”

It is all too obvious that this item is a prime example of churnalism. Its sole purpose was to promote a blatantly political and one-sided report produced by an NGO with a known anti-Israel agenda. That NGO’s representative was given a sympathetic platform from which to promote her emotive and entirely context-free talking points totally unchallenged, with more than a little help from the BBC presenter who refrained from making any effort to comply with BBC editorial guidelines concerning contributors’ affiliations.