The BBC Jerusalem bureau’s Tom Bateman has recently been in the Gaza Strip again and among the resulting reports is one apparently filmed around June 20th which appeared on the BBC News website’s ‘Middle East’ page on June 29th under the title “The precarious life of a Gaza fisherman”. 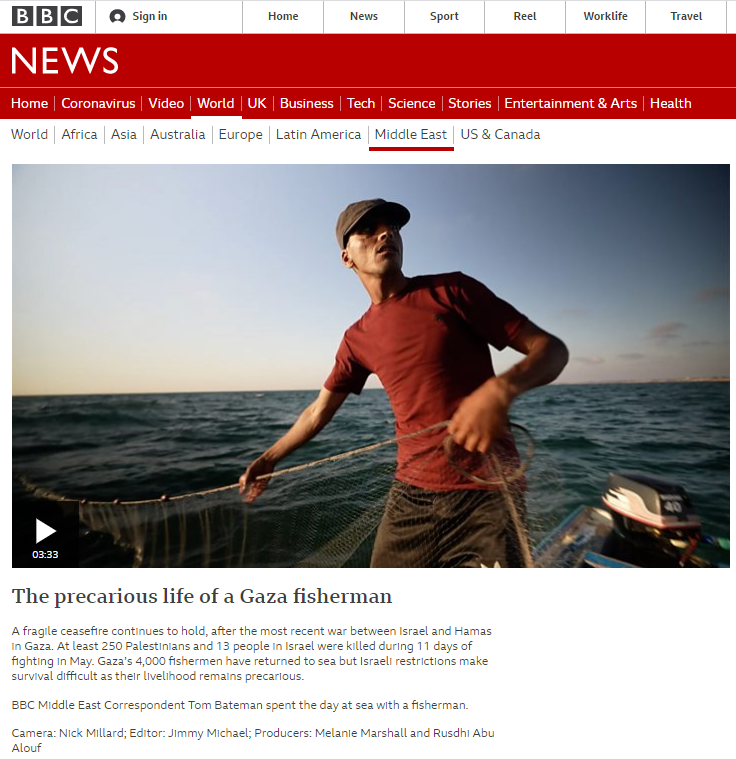 “A fragile ceasefire continues to hold, after the most recent war between Israel and Hamas in Gaza. At least 250 Palestinians and 13 people in Israel were killed during 11 days of fighting in May. Gaza’s 4,000 fishermen have returned to sea but Israeli restrictions make survival difficult as their livelihood remains precarious.

That fisherman is presented only as Rajab and it is hence impossible to verify or put into context his claim of having been shot in the eye with a rubber bullet by Israeli naval forces.

Bateman: “We’re leaving the harbour now. But for these guys, they’re not like any other fishermen. What they’re heading to is a military zone. It’s effectively like a front line for them. Israel imposes a limit on how far they can go out. Beyond that point they risk arrest or even being shot at, if they cross over that line. Now Israel says it imposes this as part of its blockade of Gaza to prevent weapons getting to Hamas and other militant groups. But for these fishermen who are going out just for their catch to feed their families and to sell what they get, it of course makes the entire thing fraught with risk, fraught with danger.”

Subtitles: “According to the Gaza Fishermen’s Association, since January 2021 there have been 134 incidents including arrests and shootings. Rajab says he has been shot twice. Most recently with a rubber bullet.”

Subsequently, viewers are told that:

Subtitles: “Israel says it only acts to defend itself and to secure the area near the Gaza Strip. During the recent conflict in May, Israel didn’t allow any fishing at all. As tensions between Israel and Hamas ebb and flow, so does the fishing limit.”

In short, the only explanations of why limitations are imposed on the Gaza fishing zone throughout this entire three-and-a-half-minute film come in those two “Israel says” sentences:

“Now Israel says it imposes this as part of its blockade of Gaza to prevent weapons getting to Hamas and other militant groups.”

“Israel says it only acts to defend itself and to secure the area near the Gaza Strip.”

Audiences are told nothing about the actual cases of arms smuggling by sea and other incidents that explain what “Israel says” but have been serially ignored by the BBC in the past.

Notably, one of the listed producers of Bateman’s filmed report, the BBC Gaza office’s Rushdi Abualouf, has in the past amplified Hamas spin on one such incident:

Past BBC content has similarly presented superficial portrayals of the fishing industry in the Gaza Strip which failed to inform audiences of the relevant agreements between Israel and the Palestinians concerning security along the coastline and maritime activity zones: 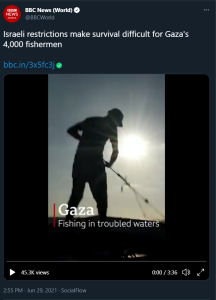 It is of course impossible to report accurately and impartially on the difficulties of fishermen in the Gaza Strip without provision of the relevant context of terrorism (a word which does not appear even once in this report) and smuggling.

Bateman’s “Israel says” box-ticking clearly fails to provide BBC audiences with the full information necessary for proper understanding of this story and so his report is merely yet more opportunistic promotion of the partial and superficial narrative expressed in the BBC’s Tweet promoting his film.