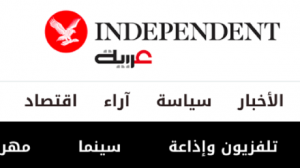 As we’ve previously demonsrated, Independent Arabia – The Independent’s Arabic (IA) edition – does not “conform to the world-renowned standards, code of conduct and established ethos” of its London-based English parallel.

Although the editorial board issued this promising quotation prior to launching the new edition’s website in early 2019, in practice nothing stopped Independent Arabia from publishing, for example, an article absurdly claiming that the modern Hebrew language is derived from Arabic; or a theatre critique praising the morally grotesque depiction of Anne Frank as a bloodthirsty Israeli who oppresses Palestinians.

Notably, both items are viewable under The Independent’s logo to this very day.

Though it’s the Arabic brand of the Independent, given that Independent Arabia is actually fully owned and operated by Saudi Research and Media Group (SRMG) – often regarded as one of Riyadh’s “soft power” organs in the UK – its failure to meet proper journalistic standards is hardly surprising.

But, some contributors do take their freedom to engage in biased and false “reporting” more seriously than others. IA’s West Bank correspondent Khalil Mousa, for example, has been regularly amplifying Palestinian speakers who deny the historical connection between the Jewish people and the cities of Hebron and Jerusalem.

He’s also personally questioned such relations ever existed, writing in his own voice:

Ever since [they began residing there], the settlers have tried to consolidate their presence in Hebron, working to Judaize it and form historical connections to it, with the support of the Israeli government.

In two more recent articles, although Moussa finally conceded that some Jews were historically present between the Jordan River and the Mediterranean Sea after all – he still returned to his habit of viewing any kind of contemporary Jewish presence as dangerous and alarming.

Thus, on April 19th, 2021 Moussa wrote about two ancient Jericho synagogues from the Byzantine period, and at the same time warned from their “Judaization” (!) in the headline:

Later in the article, he claimed that the two synagogues’ respective discoveries were when Jericho was under Jordanian rule (i.e. between 1948-1967), when in fact they were discovered in 1918 and 1936.

Last week, on June 29th, he made the following statements about the history of Jerusalem’s Jewish Quarter in the Old City:

Not even seven months passed since Israel had occupied East Jerusalem in 1967, and it already came forward and issued an order expropriating the Sharaf neighborhood in the South of Jerusalem’s Old City […] giving it the name ‘the Jewish Quarter’.

So, in Moussa’s world the Jewish Quarter only got its name in 1967, and Jews have been “a minority among the Palestinians” there for centuries.

Historical facts tell an opposite story.

A portion of Jerusalem’s Old City lying between Zion Gate, the Western Wall and the Armenian Quarter, was known as distinctly (though not exclusively) Jewish since late Mamluk period.

Harat ash-Sharaf, which in 1495 was the name of what is today Rehov Misgav Ladakh, came to signify the Muslim-populated western portion of the same area east of the Armenian Quarter. Since 1883, it was also an Ottoman census unit which encompassed the entire Armenian Quarter, together with Muslim and Jewish residences adjacent to it from the east.

Properties owned by Muslims there were indeed expropriated in early 1968 following the Six Day War, but they never included the Jewish Quarter in its entirety.

As for the Quarter’s demographics, Jews were never “a minority amidst the Palestinians” in the Jewish Quarter, for two reasons:

Revolutionary as it may have been for Khalil Moussa to admit that Jews had existed in this land for centuries, his coverage of its history is still egregiously biased and often counter-factual. Will the Independent’s English editors continue to maintain their indifference towards what their paper publishes in other languages?