On July 5th the BBC News website posted a filmed report credited to Anastassia Zlatopolskai on its ‘Middle East’ page under the title “After Lod violence, Israeli city’s residents fear for the future”.

“In Israel, mixed cities of Arabs and Jews remain on edge after some of the worst domestic unrest in the country’s history erupted in May.

As tensions rose in Jerusalem and fighting broke out with Palestinian militants in Gaza, mobs from both communities attacked passers-by, vandalised property and desecrated religious sites.

It prompted fears of a civil war. In Lod, a Palestinian citizen of Israel was shot dead and a Jewish Israeli was killed when a rock was thrown at his car.

The BBC spoke to two women who live on either side of the divide in Lod, about the situation in their city.”

That synopsis obscures the fact that it was Hamas which initiated the conflict that began on May 10th by launching missiles at Israel’s capital city, Jerusalem.

The film itself opens with statements from the two interviewees followed by the dramatic title “Lod: Israel’s city of fear”. 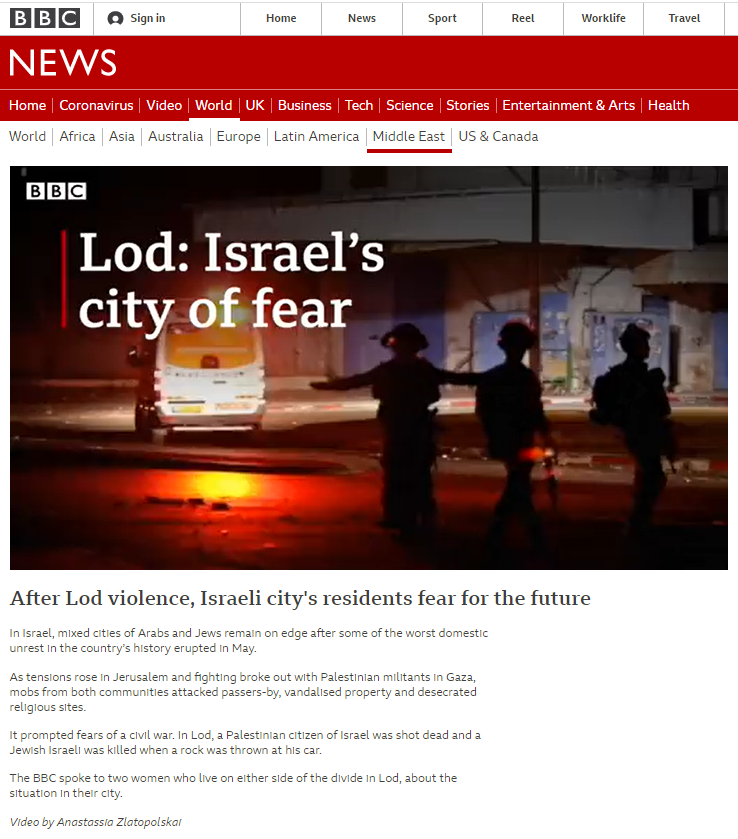 “Lod is one of Israel’s few mixed cities where Jewish and Arab Israelis live side by side.”

In order to come up with that misleading portrayal Zlatopolskai had to ignore other places including Jerusalem, Haifa, Acco, Ramle, Yaffo, Nof HaGalil and Ma’alot-Tarshiha.

The most the BBC had to tell viewers about the two women featured in this video was that they are both “mothers of three and residents of Lod”. They were not informed that Maha al Nakib is a former member of Lod’s city council, an activist in the Hadash party and a relative of the Lod resident Musa Hanusa who was shot dead on the first night of unrest in the city.

The film promotes misleading and inaccurate statements from al Nakib, the first of which includes a bracketed clarification in the subtitles: [emphasis in bold added]

Al Nakib: “The settlers threw stones and the police threw bombs [stun grenades] on the mosque.”

That incident was reported at the time as follows:

“Clashes broke out around Lod’s central mosque, which was apparently targeted by Jews who threw rocks at the building and confronted local Arabs, Kan news reported. Police moved to intervene and disperse the crowds that also attacked Arab homes in the city. Skirmishes also broke out between Arab residents and cops. A police patrol car was set on fire.”

It is of course highly unlikely that al Nakib knows the postcodes of all those involved in that incident and yet her use of the politically laden term ‘settlers’ did not prompt any clarification from the BBC. Some insight into her use of that term is provided in another media interview she gave days earlier to the US station NBC:

“”They [Jewish Israelis] insist on getting into the Arab neighborhoods not because they want to live in coexistence with Arabs and to have Arab neighbors,” said an activist for the Arab-Jewish Hadash party, Maha al-Naqib, a former member of Lod’s city council. “It’s just because they have an ideology to kick out the Arabs.” […]

Many of the Israeli Arabs in Lod describe the new Jewish arrivals as settlers — a word commonly used to describe Jews living in settlements in the Israeli-occupied Palestinian territories. Most countries consider the settlements to be illegal and an impediment to peace.

“To be a settler, it doesn’t just depend on the geographic place where you live. It’s an ideology. It’s a behavior,” said al-Naqib, 50, a Lod native.”

Viewers are subsequently told by al Nakib that: (inserts in brackets in the BBC subtitles)

Al Nakib: “The curfew it was just for Arabs. And they [police] let the visitors [Jewish mobs] to attack us.”

The 8 p.m. to 4 a.m. curfew imposed on Lod by the police on May 12th did not apply only to Arabs and yet the BBC allowed that disinformation to stand.

As al Nakib speaks, viewers see (at 01:56) footage credited in the top right corner to Adalah. 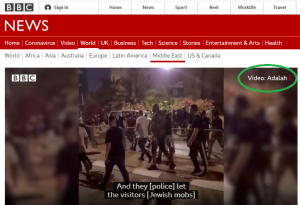 From 02:44 the BBC’s film again uses footage provided by Adalah. 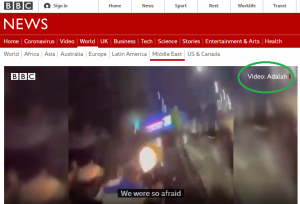 BBC audiences are not informed that Adalah is a partisan political NGO with a long record of anti-Israel activity.

At the end of the film the BBC tells its audiences that:

“The police say all who took part in the violence will face justice. But activists say police enforcement is disproportionately targeting Israeli Arabs.”

Viewers are not informed who those “activists” are and hence cannot judge the objectivity of that claim for themselves.

Coincidentally or not, just hours after Operation Law and Order commenced on May 23rd, Adalah’s general director had already decided that it was “a militarized war against Palestinian citizens of Israel” and “a war against Palestinian demonstrators, political activists, and minors”. Days later another Adalah official claimed that arrests were being made “on the basis of racial profiling”. Another political NGO – Mossawa – claimed that “90% of the detainees” were “Arab-Israeli or Palestinian” and Amnesty International put out a report in the same vein.

BBC audiences would no doubt be interested to know whether Anastassia Zlatopolskai was amplifying the talking points of any or all of those NGOs with a long record of delegitimisation of Israel in her film’s takeaway message and – given the use of footage provided by Adalah – whether or not any NGO facilitated the making of this report.