Two and a half weeks after the Palestinian Authority’s unjustified rejection of vaccines offered by Israel, in that report the BBC continues to unquestioningly promote the PA narrative. 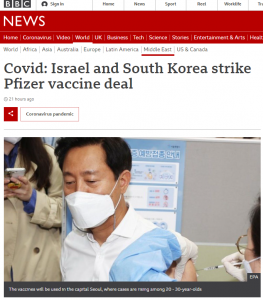 “Israel has struck a deal to provide South Korea with vaccines in return for jabs in a future shipment.

The deal involves about 700,000 of Israel’s Pfizer doses that are due to expire soon.

It comes just weeks after the Palestinian authority called off a deal to receive a million doses from Israel, claiming the vaccines were too close to their expiry date. […]

Last month the Palestinian Authority cancelled a deal under which Israel was to give it at least one million Covid vaccines.

Palestinian Authority Health Minister Mai Alkaila said they had been told the jabs would expire in July or August, but, when they arrived, the marked date was June.

“That’s not enough time to use them, so we rejected them,” she said.”

On June 18th the Palestinian Authority rejected an initial delivery of some 90,000 doses that had an expiry date at the end of June – twelve days after the date of delivery – despite its health minister’s claim that “We have the ability to vaccinate 60,000 people every day”. 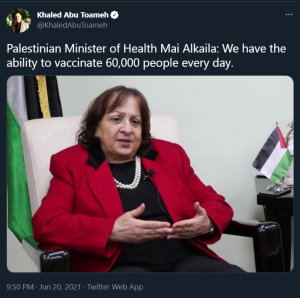 Vaccines from the same batch were used to inoculate Israeli teenagers in the 12 to 15 age group.

“Health Ministry Director General Chezy Levy said Monday that Israel is using the same vaccines rejected by the Palestinian Authority to inoculate its own population against the coronavirus “right now.”

The PA on Friday agreed to but then later rejected a deal for Israel to deliver some 1 million doses of the Pfizer-BioNTech vaccine, saying that the first 100,000 delivered were too close to expiring.

Palestinian Authority Health Minister Mai al-Kaila said they “did not meet standards and so we decided to return them.” […]

But Levy said the vaccines were absolutely fine and Israel was using the same ones, including as part of its drive to vaccinate children aged 12 to 15.

“We didn’t deliver a single vaccine [to the Palestinians] that had expired. We delivered the exact same vaccines that we are using right now for our people and our children,” Levy told Channel 12 news, explaining that the initial shipment to Palestinians was of vaccines that expire at the end of June and later shipments would have later expiration dates.” 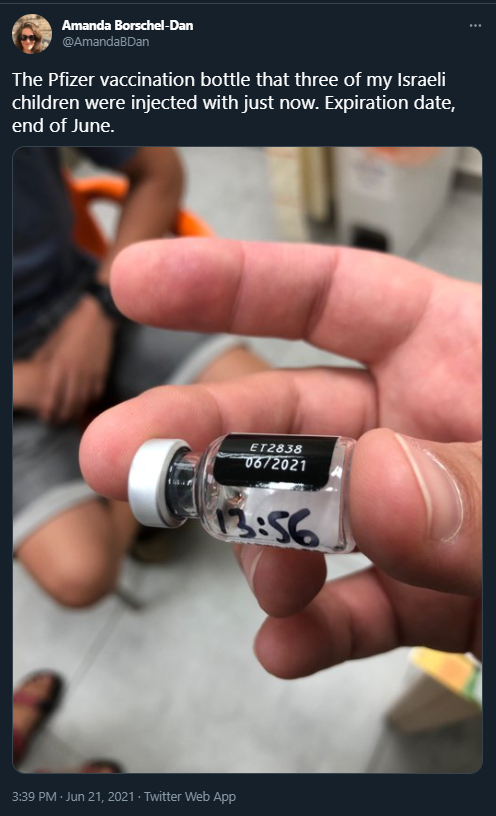 Notably, the BBC has yet to explain to its audiences why the PA also rejected the rest of the “at least one million vaccines” which had a later expiry date than those intentionally sent in the first delivery and this latest BBC report promotes links to its problematic report on the story at the time.

Despite those vaccines being good enough for Israelis and South Koreans, the BBC nevertheless continues to uncritically promote the Palestinian Authority’s unfounded narrative.