The vile conquerors who came from the darkness to desecrate the holy city of Jerusalem, cradle of TWO religions, Christianity and Islam. Only Jesus Christ, who weeps in Heaven over the fate of Jerusalem, has the right to judge me. – Archbishop Hilarion Capucci, 1974. Translated from French by Bat Ye’or)

(all translations, emphases and in-bracket remarks are by CAMERA Arabic unless otherwise specified)

The erasure of Jews and Judaism from Jerusalem’s heritage, in an attempt to depict a holy city where only Islam and/or Christianity are worthy of inclusion, is a unique antisemitic practice which seldom receives the attention it deserves. Thus, those peddling such ahistorical, hate-driven claims are rarely denounced or held accountable, even when this habit is intertwined with other forms of antisemitism – including support for violence against Jews.

The cartoons and articles in this review were mostly published in UK-based media outlets, typically affiliated with Gulf monarchies, and all except one (Middle East Monitor) are Arabic language outlets.

The above cartoon by Palestinian Muhammad Sabaaneh, for instance, appeared in the Qatari-owned London newspaper Al-Quds Al-Arabi (Arab Jerusalem) – which we previously posted about in relation to its repeated publication of antisemitic cartoons.

Commenting on the February 2021 snowstorm in Jerusalem, Al-Quds Al-Arabi featured the city’s Dome of the Rock in the middle of the storm, along with three snow formations: a snowman holding an Israeli flag on the right; an Israeli/Jewish settlement on the bottom left; and a hooked-nosed Jew, complete with the sidelocks and Yarmulke, on the top left. The hopeful title of the cartoon, “Snow, and it shall melt away…”, sharpened the contrast between the steadfast Islamic structure and the putativelytemporary Jewish presence on top of it – as unpleasant and brief as bad weather. 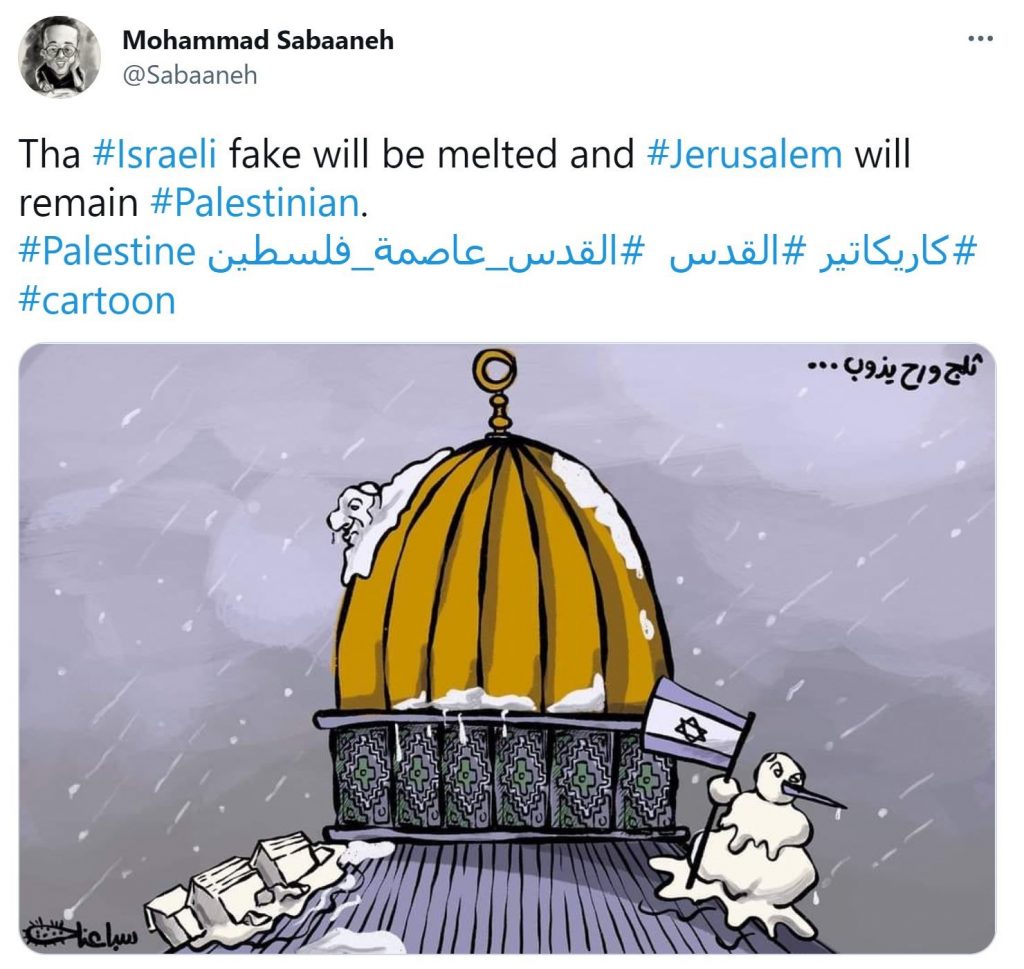 Denying Jerusalem’s Jewish history by treating it as purely a Christian-Muslim city, where only mosques and churches can be found, turns out to be a prominent theme in the cartoonist’s vast body of work.

Here are a few examples:

In Sabaaneh’s imagined Jerusalem, Jews, by definition, represent an external threat to the city’s interfaith harmony.

Unlike the iconic Cross and Crescent, both an integral part of his holy city, when the deliberately omitted Star of David finally makes an appearance it’s only as a newly-introduced and alien element – with a well-established alliance of Christians and Muslims facing its dangerous incursions.  Conveniently drawn for the purpose of rebuffing accusations of antisemitism, the Jewish symbol serves the cartoonist exclusively as a metonym for the State of Israel.

Consider this depiction of Jerusalem as a stable rock, threatened by a crab coming from an Israeli settlement constructed from mere sand (from the United States):

Or this cartoon, which also bluntly evokes the antisemitic octopus trope:

Note the Star of David on the drowning soldiers’ helmets and their grotesque facial features, which, like the hooked nose Jew, is an age old “technique used to stir up a sense of disgust and repulsion towards Jews, either collectively or individually”.

The Jewish State does not have to wear a Star of David to personify the antithesis of coexistence between Muslim and Christian Jerusalemites in Sabaaneh’s cartoons. Sometimes it comes in the form of locusts, or dangerous pathogens; but, even then, non-hostile Jews are nowhere to be seen:

One of the Arab world’s most famous cartoonists is Jordanian Emad Hajjaj (the brother of cartoonist Osama Hajjaj, whose call for genocide against Jews was under our spotlight in our previous post about Al-Quds Al-Arabi). Emad also has a sizable repertoire, throughout which he views Jews as placing Christians and Muslims in grave peril as a result of the Jewish presence, especially in Jerusalem:

In July 2017, Hajjaj drew the following response to the Temple Mount crisis of that month, which he titled “The occupation forces electronic gates on al-Aqsa”. Below, captions read from left to right “Church of Holy Sepulcher”, “Solomon’s Temple!” and “Dome of the Rock”:

Again, while Jerusalem’s Muslim and Christian legacies are undeniable, the sole Jewish “contribution” to the city which Hajjaj can envision is as an unwelcomed novelty.  In the case of the 2017 cartoon, this novelty is based on what he views as Jews’ forged history; the cartoon knowingly echoes the common lie that no Jewish Temple never existed (the expression “Solomon’s Temple” is often used in Arab media as a strawman to avoid discussing the much sturdier historicity of the Second Temple as well).

Hajjaj responded to the rising tension in Jerusalem last April with another version of his 2009 cartoon:

Against the backdrop of these cartoons, and the Arab public discourse concerning the Jewish presence in Jerusalem that they reflect, it’s easier to understand why less overt forms of Jewish erasure, particularly in the context of Jerusalem, also evoke antisemitic ideas.

Emirati-affiliated Sky News Arabia, for example, asserted in June 2020 that:

Today, approximately 350,000 Jerusalemites have remained in Jerusalem, compared to more than 700,000 settlers.

It hence considers not only East Jerusalem Jews as “settlers”, but the West Jerusalem ones as well.

As for the Saudi-owned and operated Arabic edition of the Independent, it employs the relentless Khalil Mousa, whose repeated denial of Jewish history inside and outside Jerusalem was addressed on these pages on multiple occasions.  Notably, Mousa’s method of Jewish erasure repeatedly involves the use of ‘scare quotes’, aimed at casting an ironic, dubious light on Jerusalem’s Jewish heritage (all while the city’s connection to Christianity and Islam is presumed serious and concrete).

The [Trump] plan cites the importance of Jerusalem to the followers of the three heavenly [i.e. Abrahamic] religions, as [are] Al-Aqsa Mosque to the Muslims, ‘The Wailing Wall’ to the Jews and the Church of Holy Sepulcher to the Christians.

Israel has been targeting the Old City ever since its 1967 occupation of Jerusalem, […] where the al-Aqsa Mosque, the Church of Holy Sepulcher and ‘the Remnants of the Temple’ are located

However, Mousa does not use scare quotes in reference to the Western Wall when he calls it by its Muslim name al-Buraq, where he mentions Jewish presence either negatively or not at all:

The ‘Buraq Revolution’ [i.e. the 1929 riots] broke out in 1929 following the Jews’ attempt to change the historical status quo in al-Buraq Wall

Damascus Gate is one of the most prominent entrances which lead to the al-Aqsa Mosque, Church of Holy Sepulcher and al-Buraq Wall.

The UNESCO April and October 2016 decisions concerning Jerusalem –  essentially erasing Judaism’s connection to the Temple Mount –  also reinforce this content. They, too, present themselves as neutral but in fact serve as yet another part of a body of discourse seeking to deprive Jews of their holy city  – by erasure and mischaracterisation alike.

Though it may seem at first sight to be a bit more benign than other antisemitic tropes, Jewish erasure from Jerusalem’s history is equally pernicious. Even when speakers sophisticatedly refer to Judaism not by its name but by its absence, such speech has the effect of leaving its adherents outside the boundaries of legitimacy, into which Christianity and Islam are welcomed in open arms.  Furthermore, as we’ve demonstrated – this phenomenon often goes hand in hand with Jews presented as a constant, immanent threat that other faith communities bravely confront.

Unfortunately, those peddling such antisemitic narratives are rarely if ever held to account. Cartoonists like Sabaaneh and Hajjaj are viewed as respectable voices in Western circles, especially “progressive” ones; the Arabic editions of Independent and Sky almost never correct the falsehoods they regularly publish, while still enjoying the dignified reputation of their English speaking parallel sites; and six years after their infamous 2016 decisions, UNESCO’s prestige is all but intact.

This impunity enjoyed by such anti-Jewish cartoonists, journalists and polemicists is even greater due to the regrettable fact that Jewish erasure from Jerusalem (and history in general) does not explicitly fall within the IHRA’s working definition of antisemitism.

EPILOGUE: CAPUCCI’S CASE SHOWS HOW DEEP DOES THE LACK OF ACCOUNTABILITY RUN

Lastly, in order to shed more light on how this situation continues for so long, and why it’s so dangerous, we ought to to go back to the 1974 “vile conquerors” quote that opened this post – by Catholic Melkite cleric Hilarion Capucci.

As readers are about to see, at least to this particular historical figure, the exclusion of Judaism from Jerusalem’s heritage played a key role in constructing a worldview which supports terrorism – namely, against Jewish civilians in their homeland and holy city. Unsurprisingly, Capucci is still honored by the exact same people who share his view about Jerusalem today, even if unlike him, they do not live up to its full violent potential.

Capucci mentioned “the vile conquerors” in reference to the Israeli authorities, upon sentencing him for twelve years in prison under terrorism charges. As is the case with later examples analysed here, according to the devout monsignor, Jerusalem has exactly two legitimate religious communities, only two which truly belong there. Once again, those who are members of neither and at the same time claim to have collective rights (let alone sovereignty) in the holy city are nothing but usurpers or interlopers, “vile conquerors who came from the darkness to desecrate [it]” in his words.

Capucci’s proposed solution could be deduced from another speech he made (translated from Arabic by PMW):

If Jesus was sent again, the Vatican would become the headquarters of the Fatah Movement.

Indeed, Israel tried the cleric, a personal friend of Yasser Arafat, after he was caught smuggling rockets, explosives and weapons into the country inside his official “Archbishop of Jerusalem” vehicle, all at the PLO’s disposal.

After his release (only three years into his sentence, due to the Holy See’s intervention), Cappucci lived as a free man in Rome until his 2017 death, and never lost his title in the Catholic church.  Arab activists, thinkers and even governments “lionize” him to this day, including Sabaaneh himself:

Given how deep Jewish erasure runs within contemporary Arab discourse, with Capucci being one of the first figures to articulate it so clearly in both word and deed, this sycophancy is expected. In his fans’ eyes, Capucci embodied Christian-Muslim partnership in the struggle to liberate Palestine from the non-Muslim and non-Christian invaders, to whom they carefully refer as “Zionists” or “Israelis” (well, at least most of the time).

And as all the content we surveyed here demonstrates, they seek to convey this message to the next generation as well. Capucci never paid the proper price for his actions; will their antisemitism ever bear one?

During the Jerusalem violent events during April and May, Hajjaj and Sabaaneh published the following cartoons:

All five cartoons peddle the same antisemitic trope that was extensively discussed in this post. Once again, they portray Jerusalem as a city solely reserved for Muslims and Christians, with interlopers – in Sabaaneh’s case, they are represented by pests of different sorts; in Hajjaj’s, they are portrayed as violent police – threatening both populations. Always shown in clear contrast with the crosses and crescents to mark that they are neither Muslim nor Christian, three of the cartoons also mark them with the Israeli flag containing a Star of David.