The death of the PFLP-GC leader Ahmed Jibril earlier this month in Damascus was not reported by the BBC in the English language but did receive coverage in Arabic. The majority of the BBC’s audience would hence be unaware of the condolences offered by various Palestinian Authority officials.

“His Eminence, in a telephone call, also provided his condolences to Badr Jibril, the son of the deceased, praying to God Almighty, to cover him with his vast mercy, that [Jibril] dwell in his vast gardens, and grant his family and relatives patience and solace,” Abbas’s office said in a statement carried by WAFA. 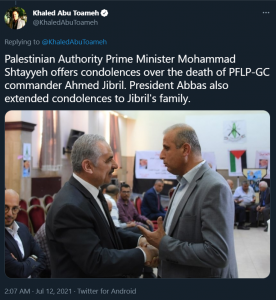 The most recent BBC profile of “Mr Jibril” and his organisation dates from 2002. Written by former correspondent Martin Asser, it includes a description of the terrorist organisation’s operations as “ingenious”.

The same description appears in another report by Asser written two years earlier in May 2000 which is also still available online. The caption to the main image illustrating that report claims that “Most Palestinian groups have given up the armed struggle”. 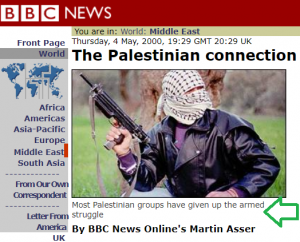 Between the signing of the Oslo Accords in September 1993 and the BBC’s publication of that statement in May 2000, two hundred and sixty-nine Israelis had been murdered in terror attacks. Four months after that claim was made, the second Intifada began and over a thousand more Israelis lost their lives in terror attacks perpetrated by a range of “Palestinian groups”, including some connected to the Palestinian Authority.

Nevertheless, the BBC has allowed that misleading claim to remain online for over two decades.