“Lebanon’s Prime Minister-designate Saad Hariri has given up trying to form a new government after nine months of deadlock over its make-up, pushing the country deeper into crisis.

Mr Hariri said it was clear that he would not be able to agree on cabinet positions with President Michel Aoun.”

Readers are later informed that: 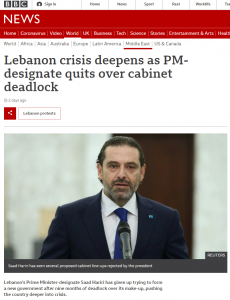 The portrayal of Hizballah as a “militant” movement clearly does not adequately inform BBC audiences of the organisation’s terrorist and criminal operations. The description of it as “Iran-backed” is similarly unhelpful to anyone trying to understand the power struggles that are affecting Lebanon.

While the BBC has reported fairly widely on the economic crisis in Lebanon under the tag ‘Lebanon protests’, explanations of the background to the issue have been more limited.

In August 2020 a written report titled “Lebanon: Why the country is in crisis” cited corruption as a cause and informed BBC audiences that:

“Most analysts point to one key factor: political sectarianism, or groups looking after their own interests. […]

It is this religious diversity that makes the country an easy target for interference by external powers, as seen with Iran’s backing of the Shia Hezbollah movement, widely seen as the most powerful military and political group in Lebanon.”

A filmed item – “Lebanon: Why the country finds it hard to change” – that was produced by BBC Monitoring in September 2020 also cited Lebanon’s “unusual political system based on sectarian representation”, stating:

“This has meant that different groups in the country are susceptible to influence from regional powers – most recently Iran and Saudi Arabia. Iran’s staunch support of Hezbollah and the group’s increasing domination in Lebanese politics has made Saudi Arabia and other traditionally friendly Gulf nations shy away from supporting their partners – the Sunnis. This has allowed Hezbollah and its Christian allies to strengthen their foothold in governance.”

However at no point in that film were audiences told that Hizballah participates in Lebanese politics despite being designated terrorist organisation that also engages in criminal activities and how that affects Lebanon. Neither were they informed exactly how that euphemistically termed “staunch support” from Iran manifests itself in practical terms.

As pointed out by Orna Mizrahi at the INSS when protests began in Lebanon in October 2019, that “foothold in governance” means “…Hezbollah’s ongoing strength within the Lebanese political system and the organization’s ability to influence and paralyze the decision making process in accordance with its interests.” She added:

“Hezbollah’s incorporation in the government has also had economic ramifications. On the one hand, it enables Hezbollah to divert the budgets of government ministries under its control for its needs, with the general population bearing the cost, and on the other hand, the impact of sanctions against it, which have been significantly broadened over the last year, also trickles down to the Lebanese economy.”

A year later the same author and others noted that:

“The economic crisis also affects Hezbollah, which itself is suffering from budgetary constraints. The reduction in financial assistance from Iran has increased the organization’s motivation to maintain its grip on government ministries with economic significance (such as the Health Ministry and its large budget, and the Finance Ministry), in order to increase its power, control national resources, and divert resources to its supporters. At the same time, Hezbollah’s control of key positions, and concern that this will determine allocation of assistance packages – for example, which civilian projects are financed and which contractors are chosen for the projects – may deter Western companies from activity in Lebanon out of concern of a negative American reaction.”

Writing recently at the Jerusalem Post, Dr Jonathan Spyer observes that the roots of “what went wrong” in Lebanon were evident back in 2007:

“Also then, it was evident that there were two powers in Lebanon. The first, as represented by the March 14 movement, was ostensibly forward-looking, oriented toward the West, toward commerce and toward normality. The other power was that of Iran, via its oldest franchise, the Lebanese Hezbollah movement. This interest had its own military power that outmatched that of the state and dwarfed the other irregular military presences in the country. It had its own economy, too, its own sources of income, its own smuggling routes.

The project of the Iranian element was that the two Lebanons should continue to exist indefinitely. The former was to provide a convenient carapace of normality and legitimacy beneath which the latter could continue its allotted tasks in Tehran’s long war against Israel. Supporters of the March 14 project had a tendency to avoid the discussion of hard-power issues. This in retrospect was to prove fatal.

Any chance that the Lebanon of March 14 might mount a defense in arms of its vision of the country ended in the events of May and June 2008. In a brief conflict on the streets of Beirut, the forces of Amal and Hezbollah contemptuously brushed aside the haphazard military mobilizations of the pro-March 14 Sunni and Druze forces.”

Dr Spyer also explains what the BBC described as having made Saudi Arabia and others “shy away”:

“Growing Saudi and US discontent at the reality of Iranian power in the country came to a head in 2015-2016. In early 2016, Riyadh announced the withdrawal of its deposits from the Central Bank of Lebanon. This followed the cancellation of $4 billion of aid to the Lebanese armed and security forces.

The US “Hezbollah International Financing Prevention Act” of 2015 hit hard at the financial services sector, another key element in the Lebanese economy. Saudi Arabia, Bahrain, Kuwait and the United Arab Emirates issued advisories against travel to Lebanon at that time. This ended the country’s traditional role as a permissive playground for visitors seeking a congenial respite from Gulf restrictions. […]

But as the official economy foundered, the parallel Iran/Hezbollah shadow economy prospered. Not, however, in such a way that the average citizen benefited. The porous or Hezbollah-supervised borders between Lebanon and Syria allowed for smuggling of oil imports and their resale in Syria, to the benefit of Hezbollah. Captagon amphetamine pills manufactured in Syria, and cannabis were smuggled the other way, finding their destination in European cities or in the Gulf via Hezbollah-supervised routes. Needless to say, none of the profits from this burgeoning sector went to service the national debt, or to benefit the crumbling public infrastructure.”

Lebanon’s political and economic crisis is in no small part attributable to the fact that the Iranian terrorist franchise Hizballah holds so much political and military power over the country. Repeated vague BBC references to “corruption” and tepid portrayals of Iranian “backing” and “support” for what is euphemistically portrayed as a “militant” group obviously do not provide audiences with the background information necessary for full understanding of the consequences for Lebanon of having a terrorist and criminal organisation in governance.