Let’s begin by noting that the piece published in The Times (“The Gen Z activist twins of Sheikh Jarrah, Jerusalem”, July 17) by Charlotte Edwardes is not journalism. Rather, it’s pro-Palestinian advocacy published by a generally serious news outlet.

The “Gen Z activist twins of Sheikh Jarrah” profiled are Muna and Mohammed el-Kurd – the latter of whom we recently posted about in response to a similarly fawning profile in the Financial Times.

When we write that The Times piece is not journalism, we’re saying that every claim made by the Kurd siblings is accepted at face value, without even a trace of journalistic skepticism or scrutiny.  The Times journalist doesn’t merely legitmise or amplify the Kurds’ narrative. It accepts it as gospel.

Theirs began the way of modern movements of resistance: with Muna el-Kurd taking out her iPhone and live streaming the scenes right in front of her. Mohammed, her brother, followed suit. Two Palestinian 23-year-olds with their Apple Inc weapons, documenting the almost daily violence they witness from armed settlers and military police.

Last month their Instagram Stories drew so much attention that the authorities – perhaps unsure of how to handle the situation – arrested them.

The suggestion that Israeli police arrested the pair because they didn’t know how to handle their social media impact isn’t backed up with a source, and thus is sentence you’d think would be flagged by an editor.  As media outlets who covered their arrest made clear, they were arrested under court order on suspicion of participating in riots that took place in Sheikh Jarrah in early June.  Now, it’s one thing to raise doubts over Israeli account of the arrests, but quite another to omit the police statement altogether.

The Times journalist then repeats the claim that they were arrested merely for their social media activism, and, unsurprisingly, cynically evokes George Floyd:

Certainly, if Instagram Live is a crime, the whole of Gen Z is at risk, because this is a contemporary response to social injustice. It’s what Darnella Frazier did when she saw a policeman with his knee on George Floyd’s neck in 2020…The audience doesn’t need every twist and turn narrated; viewers want to look at their screens, see the footage and make up their own minds.

As we’ll explain later, the black and white framing of the property dispute in Sheikh Jarrah, and the police response to related disturbances in the neighborhood, is extraordinarily misleading, and has no relationship whatsoever to the filmed murder of George Floyd.  When the journalist writes that “the audience doesn’t need every twist and turn narrated”, she’s revealing that she doesn’t have an interest in applying standard journalistic skepticism to the story.

Throughout the profile, there are unsubstantiated and claims like these:

“I feel there is a new generation of people all around the world who feel that they want to be informed like this,” Mohammed says. So powerful is the threat of viral transparency, one of his friends in Jerusalem was recently arrested on suspicion of wanting to put footage on TikTok. “They actually said the charge was ‘TikTok’,” he says.

The reporter didn’t seek out a response to the allegation, and our research was unable to find any information on the supposed arrest of a Palestinian merely for uploading protest footage onto TikTok.

Later in the article, after informing readers that “Mohammed’s day job is an adjunct professor in creative writing at the City University of New York” and that Muna is “a trained clown therapist”, the journalist, in her own voice, amplifies Palestinian propaganda about the Sheikh Jarrah row.

Sheikh Jarrah is a short walk from the Old City. It’s long been targeted by right-wing American-Israeli settlers determined to overturn Palestinian ownership of houses awarded two generations ago to families in compensation for property they lost when they were displaced from their homes in Israel. These settlers aim to take the houses of Palestinian families using pre-peace agreement documents and discriminatory property laws that favour Jews over Arabs.

The half-truth, distortions and lies here are numerous.

First, contrary to the message conveyed in the passage, Palestinian tenants do not possess “ownership” of the properties.  There is little if any legal dispute – based on numerous Israeli court decisions going back decades – that the property was owned by Jews prior to the 1948 War.  Further, the homes were “awarded” by Jordan to the Palestinians in question, as “leaseholders”, not “owners”, after they took control of the Jewish properties during Aman’s illegal occupation of east Jerusalem.

Also omitted by The Times: at issue in Sheikh Jarrah is a decades-long private legal case that revolves around the Palestinians’ refusal to pay rent, some of whom – including, the journalist obliquely acknowledges, the Kurds’ – are squatters.  Further, the tenants have reportedly refused compromises – likely for ideological reasons – that would have given them protected status and allowed them to continue living in the homes.

Finally, the claim that the “settler’s” legal case is based on discriminatory laws is the opposite of truth.

Critics of the Israelis’ legal claims are, in effect, making the case that discriminatory Jordanian practices before June 1967, seizing Jewish properties after expelling all east Jerusalem Jews, should be honored in perpetuity.  In what other context would it seem reasonable to bar property owners of their legal rights based merely on their religion, whilst allowing squatters and tenants who refuse to pay rent the right to continue living in the properties solely because of their ethnic background?

The Times continues in their fact-check free reporting on the victimisation of the Kurds:

The evening before I first meet them, I watch Muna’s live feed. Settlers are attacking families with pepper spray. The police join in, using batons to beat the Palestinian youths and sound bombs and smoke to disorientate them.

The reporter appears to be basing her account entirely on Muna Kurd’s social media feed.  But, since no date or other such details are provided, it’s difficult to know what incident they’re referring to and what precisely occurred.  Suffice to say, the picture painted by the passage, of Israeli police and “settlers” randomly beating Palestinian “youths” strains credulity, to put it mildly.

The journalist then peddles another completely unsubstantiated and incendiary claim, informing Times readers that Palestinians “who are assaulted” by police “and then collapse are refused medical attention.”

More fantastical claims follow, which, again, are not critically examined by the reporter:

“Police violence is not only unacceptable, it’s illegitimate, right?” says Mohammed. “But there are times when it’s absurd here. When people were playing chess on the pavement and they were beaten by batons; when children were flying balloons and an entire unit of militarised police on horseback came to confiscate the balloons. There is a video of people getting brutally beaten for flying a kite.

Did the Times journalist ask the Kurds for the video of Palestinians being “brutally beaten for flying a kite”? And, did she ask for any evidence to buttress their simply risible claim that “militarised police on horseback came to confiscate” childrens’ balloons?

If the Palestinians in the Times’ tale are saintly, the opposite can be said of their depiction of the Jewish “settlers”, many of whom we’re told (again without evidence) “are Kahanists, supporters of American-born Meir Kahane, who believe in the annexation of the West Bank and Gaza Strip by Israel and the forcible removal of non-Jews”.

Further into the piece, we’re told the following about the arrest mentioned earlier:

However, as we noted in our previous post on Mohammed el-Kurd, his claim that he has no problem with Jews seems inconsistent with his own social media record.

During an interview with MSNBC that he retweeted, he said that ‘all Israelis are terrorists’

On Twitter, he also praised a PFLP terrorist, compared Israeli actions to that of the Nazis, characterised Zionism as inherently genocidal and, most disturbingly, retweeted (and praised as ‘eloquent’) the following video of the late Kwame Ture (aka, Stokely Carmichael) literally referring to Zionism as a “Satanic movement”.

(Screen shot of his retweet in our previous post)

So, to sum up: The Palestinian activist says he has no problem with Jews, yet believes that the a fundamental belief held by the overwhelming majority of actual Jews, that the Jewish state has a right to exist, is “Satanic”.

Mohammed’s sister Muna has posted this: 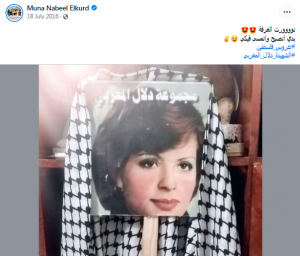 It’s a photo of notorious Palestinian terrorist Dalal Mughrabi, who took part in the 1978 Coastal Road Massacre, where she, along with other Fatah terrorists, hijacked a bus and killed 38 civilians, 13 of them children.

Her own message above the photo (translated to English by a CAMERA Arabic researcher) reads:

“I brightened the room! I want to be alongside you day and night”.

Here’s a brief thought experiment: Imagine the kind of profile Edwardes would have written if she interviewed Jewish settler twins who said “all Palestinians are terrorists”, lionised a Jewish terrorist, and suggested that the overwhelming majority of Muslims were “Satanic”.  Is there really any question she would (correctly) frame such Israelis as racist, far-right extremists?

To say that the fawning profile of the Kurds by The Times’ Charlotte Edwardes doesn’t abide by the most basic principles of journalism is an understatement.  Her obsequiousness in response to every word uttered by the ‘Gen-Z’ Palestinian ‘activist’ twins would make Guardian editors blush.