What does it mean to describe someone – or a group –  as “progressive”? There’s of course the dictionary definition:

(of a group, person, or idea) favoring or implementing social reform or new, liberal ideas

But, as we know, the term within contemporary political discourse means something else entirely, and is often associated with views that are decidedly illiberal when it comes to Jews.

For instance, supporters of Jeremy Corbyn would invariably defend him from charges of antisemitism by evoking his “progressive” politics, suggesting that nobody who supported so many putatively progressive causes could possibly be compromised by racism.  The overwhelming majority of British Jews, and a large number of non-Jewish Britons, disagreed.  Corbyn’s allies also included extremists who held views on women and the LGBT community that were on the extremist right of the political spectrum.

We bring this up in light of a Guardian op-ed by Nesrine Malik in support of Ben & Jerry’s boycott of Israel (“Corporate activism is too often cynical. In Ben & Jerry’s case, it offers hope”, July 25), which included the following:

Ben & Jerry’s is no newcomer to the progressive values game. It is a company that has always been forthright about its politics, with a long record of supporting political causes that include criminal justice reform, voter registration, campaign finance reform and climate justice. One of its most senior roles is that of “head of global activism strategy”.

Its campaigns aren’t those you would pick if you were in the business of scoring easy political points. Its stand against Israel’s occupation of Palestinian land was certain to bring with it a strong backlash.

So, is Ben & Jerry’s truly progressive?

Well, for starters, their recent support for the BDS Movement, which rejects the right of Israel to exist within any borders, is seeen by most Jews, inside and outside of Israel, as intrinsically racist.

But, that’s far from the only example of the ‘socially-conscious’ ice-cream seller making common cause with causes and public figures with regressive views.

In Jan. 2021, Martin Luther King Day, Ben & Jerry’s website praised 10 activists who, they claimed, are promoting MLK’S dream.  Among the activists were Philip Agnew, who has characterised Zionism as a form of racism, and described Israel as a state which practices “cold, calculating racism and ethnic privilege masquerading as a Jewish State”. He’s also accused Israel of “genocide”.

Dream Defenders, the Florida-based organisation Agnew co-founded that’s supported by Ben & Jerry’s, wrote that “the state violence we experience [in the United States] is directly tied to the violence facing Black and Brown communities in Palestine and around the world.”  Dream Defenders, according to ADL, has promoted the the Popular Front for the Liberation of Palestine (PFLP) terror group in its 2014 “Blacked Out History” campaign, which presented the PFLP alongside other “revolutionary organizations”.  PFLP terrorists have been responsible for numerous deadly terror attacks targeting civilians, including, most recently, the murder of a 19 year old woman, Rina Shnerb.

During the 2014 rioting in Ferguson, Missouri, after the deadly police shooting of Michael Brown, Agnew tweeted his support for the throwing of a Molotov cocktail at police – hardly consistent with the non-violent ethos of Martin Luther King.

Further, let’s recall that Ben & Jerry’s fully embraced Linda Sarour, an “activist’ with a well-documented record of anti-Jewish racism, and endorsed the Women’s March despite the fact that the leadership included acolytes of Louis Farrakhan, the notorious antisemitic and anti-LGBT hate preacher.

We are proud to announce that our newest flavor, Pecan Resist, supports the important work of @netargv, @womensmarch, @ColorOfChange, and @HonorTheEarth. Join them here >> https://t.co/b7mu4tVPYE pic.twitter.com/8fFJ6vL3vF

On their website, Ben & Jerry’s defends Sarsour, claiming that her “quotes are routinely taken out of context in an effort to drive a narrative that she is anti-Semitic, anti-Israel, and a supporter of radical Islam and terrorism, all of which are untrue”.  See these posts to show that Sarsour’s record concerning Jews, including her support for Palestinian terrorists, are most certainly not “taken out of context”.

Additionally, the Chair of the US Board of Ben & Jerry’s, Anuradha Mittal, reportedly the leading force behind the company’s decision to stop selling ice cream in the “Occupied Palestinian Territory”, is the founder and Executive Director of a think tank called the Oakland Institute.  That group once published an article arguing that “progressives” should support Hezbollah, the terror group whose leaders have called for the murder of all Jews.

Oakland Institute has also donated money to BADIL, a radical NGO that rejects Israel’s right to exist within any borders, and has openly expressed support for Palestinian terrorism.

On her personal Twitter account, Mittal has made her views quite clear.  A few days ago, she retweeted this pure incitement: 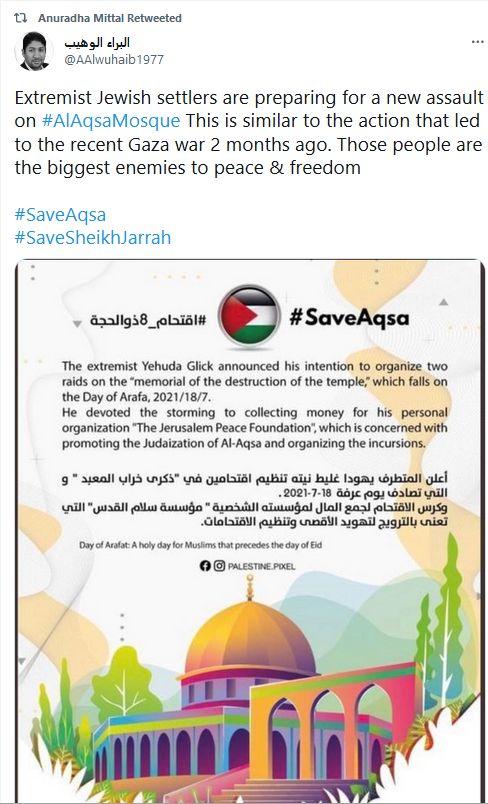 As we’ve demonstrated previously, the lie that ‘Jews are invading Al-Aqsa’, or ‘the mosque is in danger’, in some form, has been used for nearly 100 years to incite antisemitic violence.

The Guardian columnist naturally has every right to support Ben & Jerry’s boycott of Israel.  But, if the word “progressive” means anything, it certainly means taking positions which reflect fierce opposition to anti-Jewish bigotry – a test which the Ben & Jerry’s US based leadership has clearly failed.