Late on the evening of July 23rd (UK time) the BBC News website published a report about the first official commemoration for the Israeli athletes murdered at the Munich Olympic Games in 1972 on its ‘Asia’ and ‘Middle East’ pages.

Although the report is tagged solely ‘Israel’, its headline fails to inform BBC audiences of the nationality of the victims of the attack that took place 49 years ago: “Olympics: Munich victims honoured for first time at opening ceremony”. 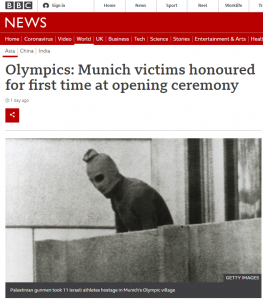 The report’s opening sentence accurately describes the incident as a terror attack:

“The victims of the terror attack at the Munich Olympics have been remembered during Tokyo’s opening ceremony, the first time in nearly half a century.”

However in the rest of the report and the photo caption, the BBC reverts to its long-standing policy of avoiding describing the perpetrators of that terror attack as terrorists.

“A moment’s silence commemorated the 11 Israeli athletes killed by Palestinian gunmen in 1972.”

“The Munich massacre on 5 September 1972 is one of the darkest chapter’s [sic] in Olympic history.

Eleven members of the Israeli team were taken hostage inside the Olympic village by Palestinian gunmen from the Black September group.

Two were shot dead almost immediately, while the others were killed during a gun battle with West German police at a nearby airfield, as the militants tried to take them out of the country.”

Clearly that latter sentence does not communicate either the acts of torture carried out by the terrorists that have been known for over six years or the incompetence of the German security forces. It also tells readers nothing about the terrorist group responsible for the atrocity and its associations.

As is well known, the BBC’s editorial guidelines encourage the use of euphemisms such as ‘gunman’ and ‘militant’, claiming that “[t]he word ‘terrorist’ itself can be a barrier rather than an aid to understanding”. It is nevertheless odd that although after nearly half a century the corporation is finally prepared to accurately define the Munich Olympics massacre as a terrorist attack, it still refrains from describing the perpetrators as terrorists.