A report titled “Tokyo Olympics: Algerian judoka suspended and sent home after withdrawing to avoid Israeli opponent” appeared on the BBC Sport website and in the updates section of the BBC News website’s ‘Middle East’ page on July 24th. 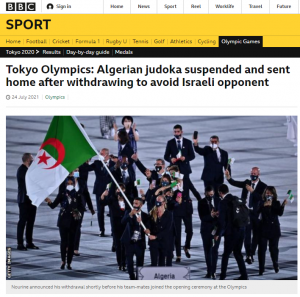 In addition to the actual story of the suspension and withdrawal of accreditation from Fethi Nourine and his coach after the former refused to compete against an Israeli, the BBC Sport report provides what is apparently considered context.

“Speaking to Algerian TV, he said his political support for the Palestinian cause made it impossible to compete.”

Readers do not get an explanation as to what the phrase “the Palestinian cause” actually means and are not informed that Fatah’s Jibril Rajoub (who is also president of the ‘Palestine Olympic Committee’ despite his long record of exploiting sport as a means of delegitimising Israel) later met with Nourine and endorsed his action.

Readers are however provided with a link to a superficial backgrounder first produced for younger BBC audiences by ‘Newsbeat’ in May.

The report goes on to promote false equivalence in a trite one-sentence portrayal of the hostilities earlier this year:

“The Israeli-Palestinian conflict has taken place over decades, with tensions flaring again in 2021 as confrontations in contested Jerusalem triggered cross-border clashes.”

Those “confrontations” were of course incited by Hamas which went on to issue a ridiculous ultimatum concerning the situation it had provoked and then subsequently launched missiles at Israel’s capital and other civilian targets. In other words, “tensions flaring again in 2021” were the result of decisions taken by a terrorist organisation that BBC Sport does not bother to name – let alone hold responsible.

In the past we have seen BBC Sport ignore or report badly on anti-Israel discrimination at sporting events, with ‘background’ – when provided – sometimes amplifying partisan political messaging.

This latest report about anti-Israel bigotry at an international sporting event similarly fails to provide BBC audiences with the full information needed to understand that story and similar ones.

A SPORTS STORY WHICH DID NOT INTEREST THE BBC