On the morning of July 22nd an explosion occurred in al Zawiya market in Gaza City. One person was killed and between ten and fourteen people – including six children – were injured by the blast. 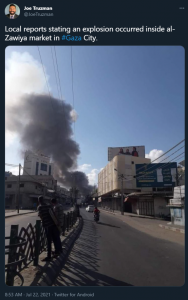 Later in the day it emerged that the site of the explosion was a weapons storage facility belonging to the Palestinian Islamic Jihad terrorist group, which issued a related statement. The Jerusalem Post reported that:

“The PIJ seemed to take some form of responsibility on Thursday evening, announcing that it would “rise up to its responsibilities” and follow up with all concerned parties concerning the explosion in the market. The terrorist movement expressed its “full solidarity” with those affected by the explosion.

The injured were transferred to Shifa Hospital in the coastal enclave. The Palestinian killed in the incident was identified by Palestinian media as Atta Saqallah.”

BBC audiences saw no coverage whatsoever of that story on any platform and regionally based staff including the Jerusalem bureau’s Tom Bateman, BBC Arabic’s Michael Shuval and Rushdi Abu Alouf in Gaza City made no mention of the incident on their Twitter accounts.

“Palestinian factions and human rights organizations have called on Hamas and other Palestinian terror groups to stop storing weapons in residential areas following another explosion, which killed one person and injured 14 others on Thursday.

They also demanded a thorough investigation into the explosion in order to hold those responsible accountable.”

Among the organisations quoted in the Jerusalem Post’s report is Al Mezan. Another organisation that issued a statement on the topic is the PCHR. Both those NGOs have been extensively quoted and promoted by the BBC in the past (see here and here), particularly in relation to casualties in the Gaza Strip during conflicts between Israel and the local terrorist organisations.

CAMERA UK has in the past documented plenty of examples of the BBC’s failure to report – and even its denial of – the issue of terrorist groups’ use of the population of the Gaza Strip as human shields, be it by launching missiles from populated areas or by placing military assets in civilian neighbourhoods.

Following this year’s May conflict, Hamas’ Yahya Sinwar gave a public address in which he related to that latter topic.

“With regard to our military or security headquarters that are located in residential areas — this was a major problem in the previous bouts [of fighting], and at the resistance factions, we worked to gradually transfer these headquarters from populated areas. We have succeeded in removing many of them, but some still need to be transferred, and Allah willing, this operation will continue. We have taken this issue into consideration, and we have taken care of transferring many of the headquarters, especially those at the high-rise and residential buildings. We have done significant work and Allah willing, we will complete it.”

Nevertheless, the fact that the BBC has elected to ignore this latest incident flagged up by Palestinian NGOs with which it has collaborated in the past indicates that it is still choosing to ignore that important element of the story of any conflict between Israel and the terrorist organisations in the Gaza Strip.

BBC COMPLAINTS: ‘IT WAS HARD FOR JOURNALISTS IN GAZA TO SEE ROCKETS BEING FIRED’