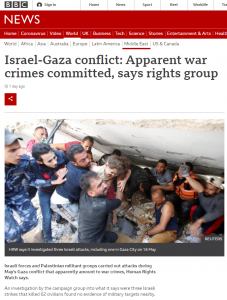 The “rights group” already signposted in that headline and later described as a “campaign group” is one of the political NGOs most quoted and promoted in BBC content: ‘Human Rights Watch’ (HRW) but as is inevitably the case, no effort is made in this BBC report to inform readers of that organisation’s long record of anti-Israel campaigning by means of frequent ‘reports’, ‘lawfare’ activity and support for boycotts, divestment and sanctions.

There is of course nothing remotely surprising about the BBC’s editorial decision to uncritically promote (including a link) HRW’s latest anti-Israel screed seeing as the corporation has in the past diligently amplified the NGO’s similar reports on previous conflicts in 2006, 2008/9, 2012 and 2014. The BBC has also self-conscripted to promotion of HRW reports on topics such as African migrants, Thai workers, business activity and ‘apartheid’ and has provided worldwide amplification to HRW anti-Israel campaigns concerning for example football, holiday rentals and Covid vaccinations.

Comment from HRW employees is frequently promoted in BBC reporting on a variety of sometimes unrelated topics and in 2014 the corporation provided promotion for a film about the organisation. Particularly noteworthy was the BBC’s extensive coverage of the non-renewal of the Israeli work visa of HRW employee Omar Shakir in 2018/19.

An investigation by the campaign group into what it says were three Israeli strikes that killed 62 civilians found no evidence of military targets nearby.” [emphasis added]

No information is provided to readers concerning HRW’s methodology which – as has been the case in the past – relies on local sources. As noted by NGO Monitor:

“Consistent with its usual shoddy research methodology and baseless legal standards, HRW’s “analysis” relies heavily on “eyewitness testimony” to claim that no Hamas or Islamic Jihad personnel, weaponry, or infrastructure was present at these sites allegedly struck by Israel.  HRW does not identify how its witnesses were selected, nor does it clarify whether or how it investigated witness affiliations to Palestinian armed groups. Similarly, it does not specify how it verified claims regarding the presence of combat activity or military infrastructure.”

One of the incidents appearing in the HRW report is described by the BBC as follows:

“Beit Hanoun, 10 May: The report says an Israeli guided missile struck near four houses, killing eight civilians. The Israeli military says the explosion was caused by a Palestinian rocket”

That incident was given extensive BBC coverage – including in a highly problematic report by Jeremy Bowen – and as was noted here at the time, an IDF investigation found that “Israel did not strike the Beit Hanoun area where the family members were killed that night”.

The BBC’s report goes on:

“Shati refugee camp, 15 May: A guided bomb destroyed a three-storey building, killing 10 civilians, according to the report. The Israeli military said at the time that senior Hamas officials were inside. Witnesses said they were not aware of the presence of any militants”

The BBC refrains from informing readers that the building concerned was the house of Hamas commander Alaa Muhammad Abd al-Alam Abu Hatab – see pages 20 and 79 here. As reported at the time:

“The Israel Defense Forces said the strike was aimed at top Hamas officials who were meeting in the building.

“During the night, the IDF attacked a number of senior Hamas figures in an apartment used as terrorist infrastructure in the area of the Shati refugee camp in the northern Gaza Strip,” the military said.”

The third incident (see page 84 here) is presented by the BBC as follows:

“Gaza City, 16 May: The report says a series of air strikes along al-Wahda Street caused three multi-storey buildings to collapse, killing 44 civilians. The Israeli military said it targeted tunnels used by militants and that the collapses were unintentional”

The BBC itself has on several occasions previously reported that:

“The Israeli military said it had “struck an underground military structure” belonging to the militant group Hamas, which controls Gaza, beneath the street. “The underground foundations collapsed, causing the civilian housing above them to collapse, causing unintended casualties,” it added.”

The BBC’s report goes on to uncritically amplify HRW’s highly dubious claims regarding military targets based on anecdotal accounts and its misrepresentation of legal issues:

“The report says “there were no evident military targets in the vicinity” of the three sites, and that “an attack that is not directed at a specific military objective is unlawful”.

All feasible precautions must also be taken to minimise harm to civilians, including by providing effective advance warnings of attacks, the rights group adds.”

In other words, what the BBC describes in this report’s opening lines as “[a]n investigation by the campaign group into what it says were three Israeli strikes that killed 62 civilians found no evidence of military targets nearby” is in fact an ‘investigation’ into one incident not caused by Israeli forces and two attacks which did have military targets even if HRW prefers to ignore the evidence.

The intention behind this report on “apparent war crimes” from Human Rights Watch is already evident in its sub-heading:

One of HRW’s staff members claimed that its supposed findings “underscores the importance of the International Criminal Court’s inquiry”.

There is of course nothing surprising in the least about that ‘conclusion’ because HRW has been promoting (with BBC amplification) the notion that Israel should “face justice” at the ICC for some time.

Human Rights Watch (and some of its staff) long since forfeited any claim to objectivity on matters pertaining to Israel, not least due to its serial involvement in largely unsuccessful anti-Israel campaigns and lawfare. One must therefore ask why the BBC continues to relate to that organisation as though it were a credible authority that produces factual and objective content worthy of amplification.