Previously we looked at BBC News website’s August 2nd anticipatory framing of a story which had yet to happen: 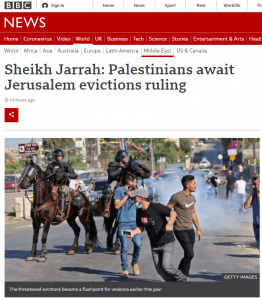 That fourth version of the amended report included quotes from one of the most prominent activists on the issue, Mohammed el Kurd, and the lawyer representing the Palestinian families, Sami Irshaid. Like the original version, it amplified a dubious claim concerning ‘war crimes’ from a UN department known for its obsession with and hostility towards Israel. It included a graphic sourced from another partisan UN body – OCHA – and again promoted an edited version of a one-sided ‘backgrounder’ on Jerusalem produced by Yolande Knell in 2017.

The BBC News website’s report did not include any comment whatsoever from the Nahalat Shimon organisation that owns the land in question or its legal team until further amendments, including a new headline  – “Sheikh Jarrah: Palestinians and Israelis baulk at evictions compromise” – were made some sixteen hours later. It is however of course unlikely that people who had already read the article would bother to access it again. 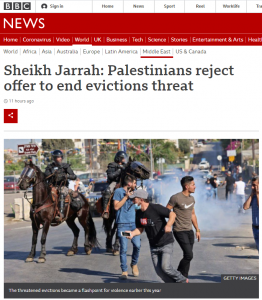 Whether or not that new headline resulted from criticism about BBC framing on Twitter from interviewee Mohammed el Kurd is unclear.

“At the court, when I asked the BBC journalist about their framing, they said “don’t worry, we’re the BBC!” And I said that’s exactly why I am worried. Typically, their framing is a gross obstruction of reality.”

That ostensibly factual and objective report refers to the Jerusalem neighbourhood concerned as being in “Israeli-occupied East Jerusalem” in line with long-standing but obviously not impartial BBC editorial policy. It promotes the same recycled partisan map sourced from the political NGO B’tselem that appeared in earlier versions of the above-mentioned report as well as the graphic sourced from UN OCHA seen in the later version and the same problematic ‘backgrounder’ film by Yolande Knell.

The ‘Reality Check’ article whitewashes the Jordanian invasion and illegal 19-year occupation of parts of Jerusalem by telling readers that:

“But after the 1948-49 Arab-Israeli war, Jerusalem, where Arabs and Jewish people had lived side by side, was divided between the state of Israel and the Kingdom of Jordan.” [emphasis added]

Predictably, readers find no information concerning the inclusion of Jerusalem in the territory assigned by the League of Nations to the creation of a Jewish homeland. They do however find a link to a partisan document co-produced by Michael Lynk, the UN special rapporteur with a long record of anti-Israel activity.

“”The original families chosen by the UN Palestinian refugee agency (Unrwa) have now become more than 60 families that comprise over three generations of Palestinians living in Sheik Jarrah,” according to a recent report by a UN special rapporteur.”

The article features a photograph of Muna el Kurd – twin sister of the activist quoted in the above-mentioned BBC report – with the caption “Palestinian activist Muna el-Kurd, a prominent Sheikh Jarrah resident, was questioned by Israeli police in June”. BBC reporting on that story was previously discussed here:

Notably, the BBC Jerusalem bureau correspondent who has produced much of the corporation’s reporting on the Sheikh Jarrah story has had a filmed report about Muna el Kurd pinned to the top of his Twitter account since May. 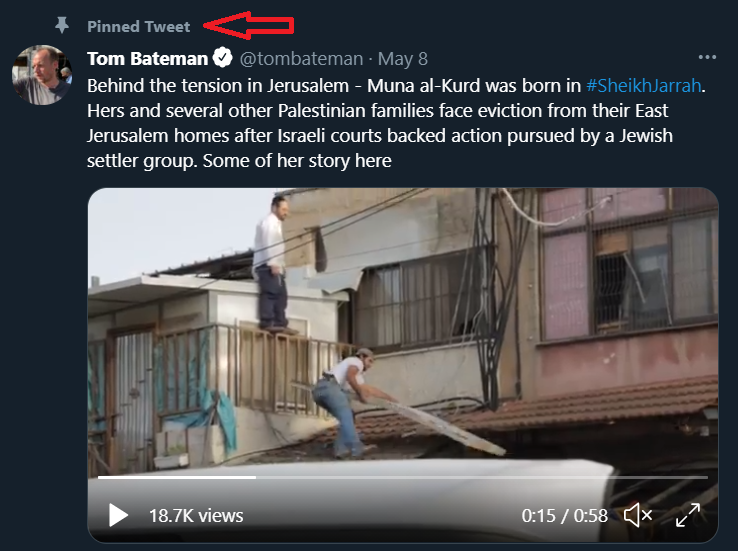 The report goes on to promote statements from UNRWA, the UN, the political NGO ‘Peace Now’ and a spokesperson for the UN High Commissioner for Human Rights, including links to content produced by the latter two. As is inevitably the case in BBC reporting, Israeli Jews residing or owning property in places which were invaded and occupied for less than two decades by Jordan are portrayed as “settlers” even if the areas concerned – all of which are now “Palestinian neighbourhoods” as far as the BBC is concerned – were under Jewish ownership when invaded. 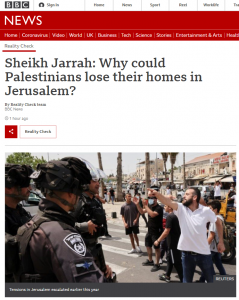 “There are about 3,000 settlers in predominantly Palestinian neighbourhoods in East Jerusalem – almost all in and around the Old City in places such as Sheikh Jarrah, Peace Now, an Israeli non-governmental organisation, says.”

The sole paraphrased quote from an Israeli source that is not a political NGO in this article is the following:

“But the Israeli government says it is entitled to build in the city it considers its capital – and the evictions are private property matters to be resolved by landlord and tenant.”

Clearly neither of these BBC reports makes a sufficiently serious effort to present the issue to audiences in an impartial manner. While the ‘Reality Check’ articles does provide some of the historical background behind the property dispute that has been absent in three months of BBC coverage of the story, it nevertheless steers audiences towards a one sided view of the issue due to its use of partisan terminology and its amplification of content and comment supplied by campaigning organisations and individuals all located on one side of opinion scale.

In part two of this post we will look at BBC radio reports on the same story to see if they adhered better to BBC editorial guidelines on impartiality which state that “ensuring that the existence of a range of views is appropriately reflected” is required and “[w]here our content highlights issues on which others campaign, we must take care not to endorse those campaigns…”

THE TIMES ABANDONS JOURNALISM IN PROFILE OF ‘ANGELIC’ PALESTINIAN ACTIVISTS