Earlier we noted that the BBC News website had not published any reporting whatsoever on the two separate incidents of rocket attacks on northern Israel launched from Lebanese territory last week. That observation still stands.

The August 6th evening edition of the BBC World Service radio programme ‘Newshour’ included an item about the second of those attacks which had taken place some twelve hours earlier at around 11 a.m. local time. However listeners heard nothing from the perspective of the residents of the Israeli communities of Ein Quiniyye, Neve Ativ and Snir who had to scramble for cover as Hizballah fired nineteen rockets into northern Israel. Rather, the programme’s synopsis described the item as being about “Anger in Lebanon after Hezbollah fires rockets into Israel”.

Presenter Julian Marshall gave an introduction (from 30:05 here) which included a confusing portrayal of the location of the rocket fire and foreseeable whitewashing of Hizballah’s terrorist designation. [emphasis in italics in the original, emphasis in bold added]

Marshall: “…and we go now to Lebanon where the militant group Hizballah has been firing rockets near Israeli positions prompting Israeli retaliation. But on this occasion, the militants have been stopped not by Israel but by Druze villagers in Chouya in the South Lebanon district of Hasbaya.”

According to reports, at least one of the people arrested by the Lebanese armed forces – who had previously been seen near the border – was released the same evening. The truck carrying the rocket launcher was also later reported to have been released.

Inaccurately describing a town located near Marjayoun as a “border town”, Marshall continued:

Marshall: “This woman who lives in the border town of Ibl a Saqi said people were desperate for calm.”

Voiceover: “Honestly, what’s happening is not our fault. I don’t know what they want. But it’s scary to be honest. It’s not a game. We don’t want a war. No-one is prepared for a war. We hardly just finished a war and got a breath after it. There’s an attack every once in a while. It’s unfair. Let them leave us alone for a while.”

Clearly the editorial decision to include that voiceover recording in the item did nothing to contribute to audience understanding of the story, not least because listeners were not informed who “they” and “them” are.

Marshall next brought in “Sunniva Rose, a senior correspondent with the English language newspaper The National News in Beirut”.

Rose began by promoting the redundant narrative that Hizballah is ‘resisting’ Israel even though Israel left Lebanese territory – as confirmed by the UN – over twenty-one years ago.

Rose: “You know it’s very embarrassing for Hizballah because they like to say that they represent the Lebanese people and the resistance and the resistance to Israel. And to have such public opposition to the fact that they own weapons, especially during their fight with Israel – this is what they get their legitimacy from, is the fight against Israel – and it’s very embarrassing for them that Lebanese people oppose that publicly.”

Rose went on to mention the “confiscated missile platform” and the arrest of the four people. Her explanation of the incident in Chouya was that the villagers “felt…that Hizballah was endangering them because maybe Israel could retaliate and, you know, that would put them in danger, their lives in danger, obviously”.

Refraining from informing listeners about UN SC resolution 1701 from 2006 which stipulates “the disarmament of all armed groups in Lebanon, so that, pursuant to the Lebanese cabinet decision of 27 July 2006, there will be no weapons or authority in Lebanon other than that of the Lebanese State”, Marshall asked:

Rose’s response included the inaccurate claim that Operation Guardian of the Walls began “in Sheikh Jarrah” rather than when Hamas decided to launch rockets at Israel’s capital city but Marshall failed to challenge that.

Rose: “…for the past weeks, since May actually when there was that conflict in Israel that started in Sheikh Jarrah, we had rockets that were being launched from Lebanon towards Israel. They were unclaimed and there were rumours that it was maybe pro-Hizballah Palestinian groups showing solidarity.”

Rose went on to note the economic and political crisis in Lebanon, speculating that Hizballah may want to show that “despite the crisis”, it is “still capable of waging a war with Israel”. 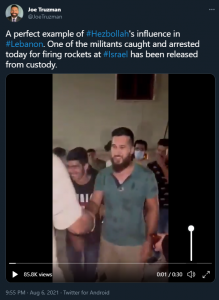 Marshall: “And can we expect those four members of Hizballah which the Lebanese army did not mention in their press release to be kept in custody?”

As noted above, the answer to that question was already negative when Marshall asked it but it did provide a cue for Rose to promote a narrative concerning the Lebanese armed forces.

Rose: “It’s a very embarrassing situation for the army as well. The army usually tries to stay above sectarian political infighting. It’s generally well-seen in Lebanon as, you know, respecting all sects, representing all sects in the country and not getting into these sectarian political infighting that we see a lot. And indeed they did not mention Hizballah in their statement on Chouya so, you know, we’ll have to follow up and see in the next days what happens. I think the Lebanese army is under pressure right now because there’s so much public attention on that incident.”

Obviously no report on rocket attacks on Israel from southern Lebanon is complete without clarification of the fact that in the fifteen years since the second Lebanon war, the Lebanese army and the UN forces that are supposed to assist it have completely failed to meet the requirement of UN SC resolution 1701 to establish “between the Blue Line and the Litani river of an area free of any armed personnel, assets and weapons other than those of the Government of Lebanon and of UNIFIL deployed in this area”.

Nevertheless, as is usually the case in BBC reporting, this item completely ignores the context of that UN Security Council resolution and how the failure of successive Lebanese governments to implement it has ensured that what it described in 2006 as “the causes that have given rise to the current crisis” have not changed for the better a decade and a half on.

AN OVERVIEW OF BBC REPORTING ON OPERATION NORTHERN SHIELD