The “key points” section of the BBC’s guidance document on removal of online content provides a view of how the corporation regards the reports it publishes online:

“The Editorial Guidelines state, “The archive of the BBC’s online content is a permanent public record and its existence is in the public interest. The online archive particularly news reports, should not normally be removed or amended.” To do so risks erasing the past and altering history.”

However, the public interest is obviously not served when the “permanent public record” produced by the world’s largest broadcaster itself alters what will become history by erasing key elements of a story. 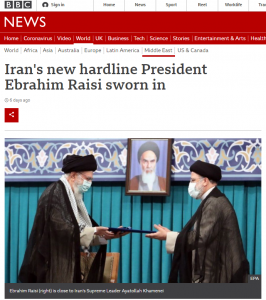 For example, on August 5th the BBC News website published one report about the inauguration of the new president of Iran: “Iran’s new hardline President Ebrahim Raisi sworn in”.

At no point in that report are readers of that report (present or future) given any information about the 260 Iranian and foreign attendees at that ceremony inaugurating a president the BBC describes as having been “heavily criticised over his human rights record”.

The much criticised presence at that ceremony of a senior EU diplomat is not documented in the BBC’s article. Neither is the fact that the inauguration was attended by representatives of several terrorist organisations.

“On August 5, 2021, an inauguration ceremony was held in Tehran for Ibrahim Raisi, the new Iranian president. Dozens of foreign delegations attended and Palestinians were also in attendance. They included Isma’il Haniyeh, head of Hamas’ political bureau and his deputy Saleh al-‘Arouri, and Khalil al-Haya, a Hamas political bureau member and second in command to Yahya al-Sinwar. Also present were PIJ leader Ziyad al-Nakhalah and representatives from the Popular Front for the Liberation of Palestine (PFLP).” 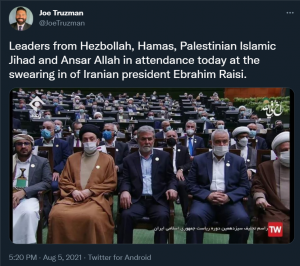 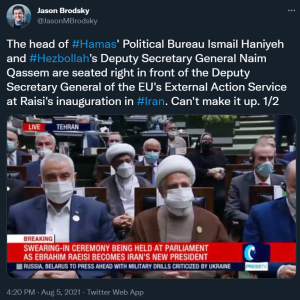 The record and history of the inauguration of Iran’s 8th president as presented by the BBC is hence obviously lacking.

It is also not at all surprising to see that BBC audiences have been told nothing about the subsequent meetings between Iran’s new president, additional Iranian officials and leaders of terrorist organisations.

“After the inauguration the Iranian president met with Isma’il Haniyeh and the Hamas delegation. Haniyeh told him that the Palestinian people would continue their struggle against Israel until they achieved their national rights, which were universally recognized. Raisi said Iran supported the Palestinian people and the “resistance” [i.e., terrorist organizations]. Ziyad al-Nakhalah also met with Raisi. Isma’il Haniyeh and Ziyad al-Nakhalah met (separately) with Hossein Salami, the commander of the Iranian Revolutionary Guards Corps. Salami congratulated them on the “victories of the Palestinian resistance” during “Sword of Jerusalem” [Operation Guardian of the Walls], claiming the end of Israel was near. Al-Nakhalah and Haniyeh claimed the balance of power had changed in favor of the Palestinian “resistance” and that constructing the local forces kept Israel constantly tense. The Iranian news agencies quoted Hossein Salami as saying that only force could contain the “intractable Zionists” and strengthening “Palestine” was a strategy and mode of action which had to be continued. He also said they were waiting for the Israelis to trip, and when that happened the response [of the “resistance axis”] would be the eradication of Israel.

Prior to the conflict in May that the BBC attributes to a decades-old property dispute, Iran issued threats against Israel and exploited the topic of Jerusalem to incite extremism.

“In preparation for “Quds Day” – a day that Iran and its allies in the region highlight as a way to centralize focus on Jerusalem and increase incitement against Israel – a series of statements were made.

Iran’s Ayatollah Ali Khamenei wrote that “the Palestinians’ endeavors and the pure blood of resistance martyrs have managed to multiply Palestinian Jihad’s internal power by hundreds of times. Once, Palestinian youth defended themselves by throwing stones, but today they respond to the enemy’s attacks with precision missiles.”

This coincided with Hamas warning that Israel was going to “sabotage al-Aqsa.” The Iranian leader also said that “on the issue of Palestine, all Muslim states and nations are responsible, but the Palestinians themselves are the axis of Jihad.”

From Gaza to Tehran, the insinuation was clear: A coordinated message inflaming tensions around Jerusalem, weaving together conspiracies and calling for violence.”

After the eleven-days of fighting, Iranian officials linked their country to the rocket attacks launched by Hamas and the PIJ.

“During the May 2021 Gaza-Israel conflict, Iranian regime spokesmen praised Hamas and Palestinian Islamic Jihad (PIJ) for the thousands of rockets they fired into Israel and for their loyalty to the Iranian vision of the destruction of Israel. Two of these officials – Defense Minister Amir Hatami and IRGC Qods Force commander Esmail Qaani – even linked the Iranian regime directly to the firing of the rockets. Others made many statements about the Iranian regime’s military and economic aid to Hamas and PIJ, often underlining the personal role played by the late IRGC Qods Force commander Qassem Soleimani in providing rockets to Gaza and information on manufacturing them to Hamas and PIJ.

Leaders of the Palestinian resistance factions expressed thanks to senior Iranian regime officials for the aid and guidance they had provided in recent years and particularly just now. The Iranian regime mouthpiece Kayhan, on June 8, even officially labelled the Palestinian organizations as members of the Iranian resistance axis – meaning that they heed and are operated by Tehran for the latter’s purposes.”

None of that received any coverage from the BBC but there is of course nothing novel about the corporation’s under-reporting of the links between Iran and assorted Palestinian terror groups.

Indeed, four years ago when the previous Iranian president was sworn in for the second time, the BBC likewise ‘altered history’ by erasing the presence of Hamas officials from its report on the ceremony.

BBC AUDIENCES IN THE DARK ON IRANIAN TERROR FINANCING YET AGAIN

FILLING IN THE BLANKS IN BBC REPORTS ON HAMAS, QATAR AND IRAN