In recent days BBC audiences have seen cross-platform promotion of content produced by the Jerusalem bureau’s Yolande Knell on the topic of crime in Israel’s Arab sector. 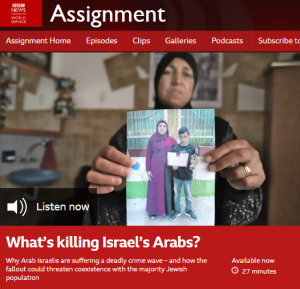 “Israel’s Arab population is in the grip of a violent and deadly crime wave. Since the start of the year, scores of Arab citizens have lost their lives and increasingly, even women and children are victims of drive-by killings, point-blank shootings and escalating gang warfare. Arabs account for only around one in five of all Israelis, yet they are now the majority of the country’s murder victims. Many say the problem of organised crime has grown out of control within their communities; others argue that the police do little to combat it. Some claim that Israel’s Jewish majority simply does not care. With a new coalition government now in office, which includes an Arab party, the BBC’s Yolande Knell meets victims’ families and those in authority to find out what is going on, and what hope there is for an end to the carnage.”

One of the people credited with having produced that report – Quique Kierszenbaum – is not a BBC employee but an “independent documentary photographer and videographer based in Jerusalem” who two years ago collaborated with the foreign-funded political NGO ‘Breaking the Silence’ to produce an overtly political photo exhibition in Tel Aviv. 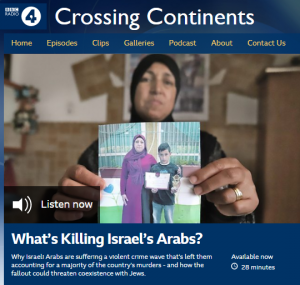 “Israel’s Arab population is in the grip of a violent and deadly crime wave. Since the start of the year, scores of Arab citizens have lost their lives and increasingly, even women and children are victims of drive-by killings, point-blank shootings and escalating gang warfare. Arabs account for only around one in five of all Israelis, yet they are now the vast majority of the country’s murder victims. The BBC’s Yolande Knell meets victims’ families and those in authority to find out what is going on, and asks what hope there is for an end to the carnage.”

A recurring theme promoted in all three items is the claim that Israel’s police force does not do enough to tackle crime within the Arab sector.

Jaljuli: “It seems to me that the police have no interest to know who are killing these people. I wonder if it’s a policy of ‘who cares? They are Arabs so let the kill themselves’.”

Knell: “Shocking as that sounds, Maisam’s attitude seems far from unusual. The way many Israeli Arabs see it, the main reason for the endemic violence now plaguing their neighbourhoods is police inaction.”

In the written version, readers find the same messaging: 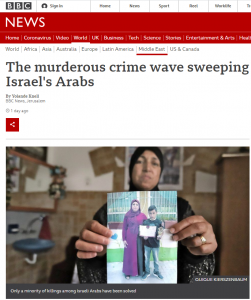 “”The police took the films of the security camera, but the police don’t know who did that until now, or they claim they don’t know,” Maisam tells me.

“I wonder if it’s a case of: ‘Who cares? They are Arabs, so let them kill themselves.'”

As shocking as it sounds, Maisam’s attitude is far from unusual.

In theory, Israeli Arabs – or Palestinian citizens of Israel, as many prefer to be called – have equal rights with Jewish citizens, but they routinely complain of state discrimination.

Bereaved families and Arab officials claim that police inaction is one of the main reasons for the endemic violence plaguing their neighbourhoods.”

The same claim is repeated by several additional interviewees but the very relevant topic of the Arab community’s lack of cooperation with the authorities is only brought up directly – and briefly – by an interviewee from the police force and Knell does not dig deeper into that issue.

“”I’d like to break a stigma,” says Cdr Ygal Ezra, who heads a new Crime Prevention Department for Arab areas. “The police invest a lot in the Arab community.”

He says that in recent years, nearly 700 Muslim police officers have been recruited and more police stations have been built in Arab towns.

When I press him on the disparity in prosecutions between murderers of Arabs and Jews, he says that he and his colleagues are often up against distrust and a lack of co-operation.

“In a murder in an Arab community, you arrive at the scene and people might have washed the blood away or made the bullets disappear or hidden the killer,” Cdr Ezra says.

“Someone might take video evidence and hide it because he doesn’t want to get involved in that experience.””

None of Knell’s reports provides a comprehensive view of the investments made by previous Israeli governments in the Arab sector and that subject is inaccurately presented as though it were something novel.

“The current Israeli coalition government – which includes for the first time, an Islamist Arab party – has promised to act.

It has budgeted over a billion shekels ($310m; £225m) for a new plan to fight crime in the Arab community. Many say that must include tackling Israeli Arabs’ relative poverty.”

Another theme promoted in all three of these reports relates to the issue of organised crime.

“Experts say that as police have cracked down on big Jewish Israeli mobsters in the past decade or so, organised crime has increasingly moved into Arab areas. Heavily-armed gangs run protection rackets and act as loan sharks, threatening and blackmailing people.”

Listeners to the audio versions of the report are told by MK Aida Touma-Sliman of the Joint List that organised crime moved into “our villages and towns” after “ten or fifteen years ago Israeli police managed to oppress Israeli organised crime in Jewish cities”.

The notion that organised crime the Arab sector – particularly in the form of protection rackets and extortion – is at most a decade and a half old is of course not supported by the historical record. None of Knell’s reports discuss other relevant topics such as the high numbers of illegal firearms in Arab communities, the prevalence of violence against women or issues such as ‘honour’ and extended family (hamoula).

Knell’s audio reports do however repeatedly seek to create linkage between crime in the Arab sector and Israel’s creation.

Knell: “In theory, Palestinian or Arab citizens of Israel are equal under the law with Jewish citizens but many live quite separate lives. Lack of trust in the police is only half of it. There are two parallel societies here with different faiths, cultures and histories. The roots go back to the creation of Israel in 1948. Several hundred thousand Palestinians fled or were forced to leave in the war between Jews and Arabs that followed. Those who stayed and their descendants became Israeli Arabs. It’s left a distinctness that goes right to the heart of how Arab families interact, not only with the Israeli state but also with each other. People here often like to settle scores in their own way.”

She interviews a rapper from Lod who reinforces that messaging.

Nafar: “If you want to go to the root of it I think you need to go back to 1948, to a whole people who were kicked out of their land.”

And in both her written and audio reports Knell alleges that the rioting and damage seen in some mixed cities in May was attributable to “discrimination”.

Knell: “In May feelings of discrimination melded with a new round of conflict between Israelis and Palestinian militants in the Gaza Strip to erupt in violent intercommunal clashes.”

And so, rather than making a real effort to dig deep into the multifaceted background to the serious violence blighting one of Israel’s minority communities and examining relevant issues including the lack of cooperation with the police, the failures of sector leadership, corruption in local government and specific social constructs, Knell opts for the much easier and more well-trodden route of promotion of a jaded political narrative of ‘discrimination’.