On August 12th the BBC News website published a report headlined ‘Hamas rocket fire a war crime, Human Rights Watch says’ on its ‘Middle East’ page which opens with the ‘news’ that intentionally launching missiles at civilian population centres is a violation of the laws of war. 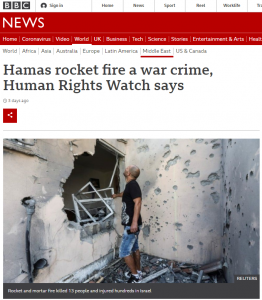 “The firing of rockets at Israel by Palestinians in Gaza during the conflict in May amounted to war crimes, Human Rights Watch (HRW) has said.

The attacks “flagrantly violated” the laws of war, the campaign group said following an investigation.”

Interestingly, before readers reach a link to that latest report produced by the political NGO Human Rights Watch, they are provided with a link to a previous HRW report that already received amplification from the BBC.

“Last month, HRW said three Israeli air strikes it investigated also amounted to war crimes. The investigation into the strikes which killed 62 civilians found no evidence of military targets nearby.”

Despite that reamplification of HRW’s allegations, the report refrains from mentioning a story that broke last week (but was ignored by the BBC) concerning tunnels in a district of Gaza City which is not far from one of the places in which Human Rights Watch claims to have “found no evidence of military targets”.

“Hamas prevented a UN team of experts from working near a tunnel that was found in May near one of the schools run by the United Nations Relief and Works Agency (UNRWA), KAN News reported on Tuesday.

A team of experts from the UN Mine Action Services (UNMAS) had arrived at the school in order to ensure the area was clear of unexploded munitions so that the school could begin its academic year safely.

As soon as Hamas learned that the team was at the school, police arrived at the scene and requested that the team leave immediately. The team subsequently canceled its plans for an additional examination at a school in Rafah in the southern Gaza Strip where a tunnel was also suspected to have been dug under a UNRWA school, according to KAN.”

This latest BBC report does include a rare reference to the human cost of shortfall missiles:

The Begin-Sadat Center for Strategic Studies, an Israeli think-tank, has estimated the misfires killed 91 people.”

However it also once again promotes Hamas’ narrative concerning the background to the conflict in May:

“It began after weeks of spiralling Israeli-Palestinian tension in East Jerusalem which culminated in clashes at a holy site revered by both Muslims and Jews. Hamas – the militant Islamist group which rules Gaza – began firing rockets after warning Israel to withdraw from the site, triggering retaliatory air strikes.”

The report recycles a film in which “Two children from Gaza City and Israel describe their experience of the Israel-Gaza conflict” that was first seen in May and which was previously discussed here.

As we noted last month when HRW published its report on Israel’s “apparent war crimes”, its intent was already evident in its sub-heading: “Israeli, Palestinian Violations Show Need for International Criminal Court Inquiry”. We observed that:

“There is of course nothing surprising in the least about that ‘conclusion’ because HRW has been promoting (with BBC amplification) the notion that Israel should “face justice” at the ICC for some time.”

Those accessing the BBC provided link to this latest report from HRW will find the same messaging (also amplified on social media) in its opening paragraph:

“Palestinian and Israeli authorities have a long track record of failing to investigate alleged war crimes, highlighting the importance of the International Criminal Court’s investigation into Israeli and Palestinian conduct.”

The BBC’s report informs readers that HRW has yet another Israel-focused project in the pipeline:

“HRW says it is preparing to release a report on Israeli air strikes that destroyed or damaged four high-rise towers in Gaza.”

The fact that HRW has ticked a box with a token report on terrorist groups’ violations does not alter the fact that Human Rights Watch (and some of its staff) long since forfeited any claim to objectivity on matters pertaining to Israel, not least due to its serial involvement in largely unsuccessful anti-Israel campaigns and lawfare.

Nevertheless, the BBC continues to relate to that serially inadequately presented organisation as though it were a credible authority that produces factual and objective content worthy of amplification.