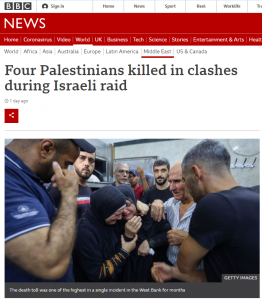 In its opening lines readers are told that:

“Four Palestinians have been killed in clashes during an Israeli raid to arrest a suspect in the occupied West Bank, local sources say.

The Palestinian news agency Wafa said four Palestinian men were killed and that a fifth was seriously wounded.”

The BBC fails to adequately clarify in its own words that the “four Palestinians” were killed because at the time, they and others were shooting at the Israeli forces. Only when reaching paragraphs five and six (out of eleven) would readers perhaps manage to understand what actually happened:

“The Israel Border Police said officers from an undercover unit “came under heavy fire from close range from a large number of terrorists” as they sought to arrest the suspect in the early hours of Monday.

The officers returned fire and “neutralised” the attackers, it added.”

However immediately after that, the BBC chooses to use the ‘he said-she said’ formula by amplifying an unsubstantiated claim concerning an “ambush”.

“According to the Palestinian news agency Maan, the Israeli forces opened fire after setting an ambush.

Palestinian President Mahmoud Abbas called the killings “an ugly crime” and warned it could lead to an escalation of violence.”

The BBC has so far not bothered to update its report to clarify that one of the “four Palestinians” killed – Nour Jarrar – was claimed by the Palestinian Islamic Jihad and that the others were also members of terrorist organisations.

“The Islamic Jihad’s military wing, the Al-Quds Brigades, acknowledged that one of the people killed, Nour Jarrar, was a member of the organization, distributing a photograph of him aiming an assault rifle.

“The blood of our martyrs will not be spilled in vain,” the Al-Quds Brigades said in a statement.

Two other suspects killed in the shootout — 19-year-old Ra’ed Abu Seif and 21-year-old Saleh Amar — were identified as being members of the al-Aqsa Martyrs Brigades.

The fourth person killed, Amjad Husseineh, was later claimed by the Hamas terror group as one of its members. Hamas said Husseineh had perished during “heroic fighting at dawn in Jenin.””

There is of course a significant difference between a story about “four Palestinians killed in clashes” and a story about four members of assorted terror groups being killed after they attacked Israeli soldiers on a mission to arrest a member of Hamas plotting terrorist activity.

It is however the former partial version of events which will remain online as “permanent public record” and “history” because the BBC has once again chosen to promote an account that excludes readily available information necessary for proper understanding of the story.