The University of Manchester on Wednesday reversed a decision to remove a statement of solidarity with Palestine’s “liberation struggle” from an exhibition at the university’s Whitworth gallery by the so-called “human rights” group Forensic Architecture (FA), a group based at Goldsmiths, University of London.

The initial decision to remove the exhibition’s opening statement, which portrayed Israel as an occupation force engaged in ethnic cleansing and apartheid, was taken after fierce criticism of the “factually incorrect and dangerously one-sided” statement by UK Lawyers for Israel, North West Friends of Israel and the Jewish Representative Council of Greater Manchester.

However, in restoring the anti-Israel statement, the museum agreed to post a rebuttal at the entrance to their exhibition, written by the Jewish Representative Council of Greater Manchester, seen here: 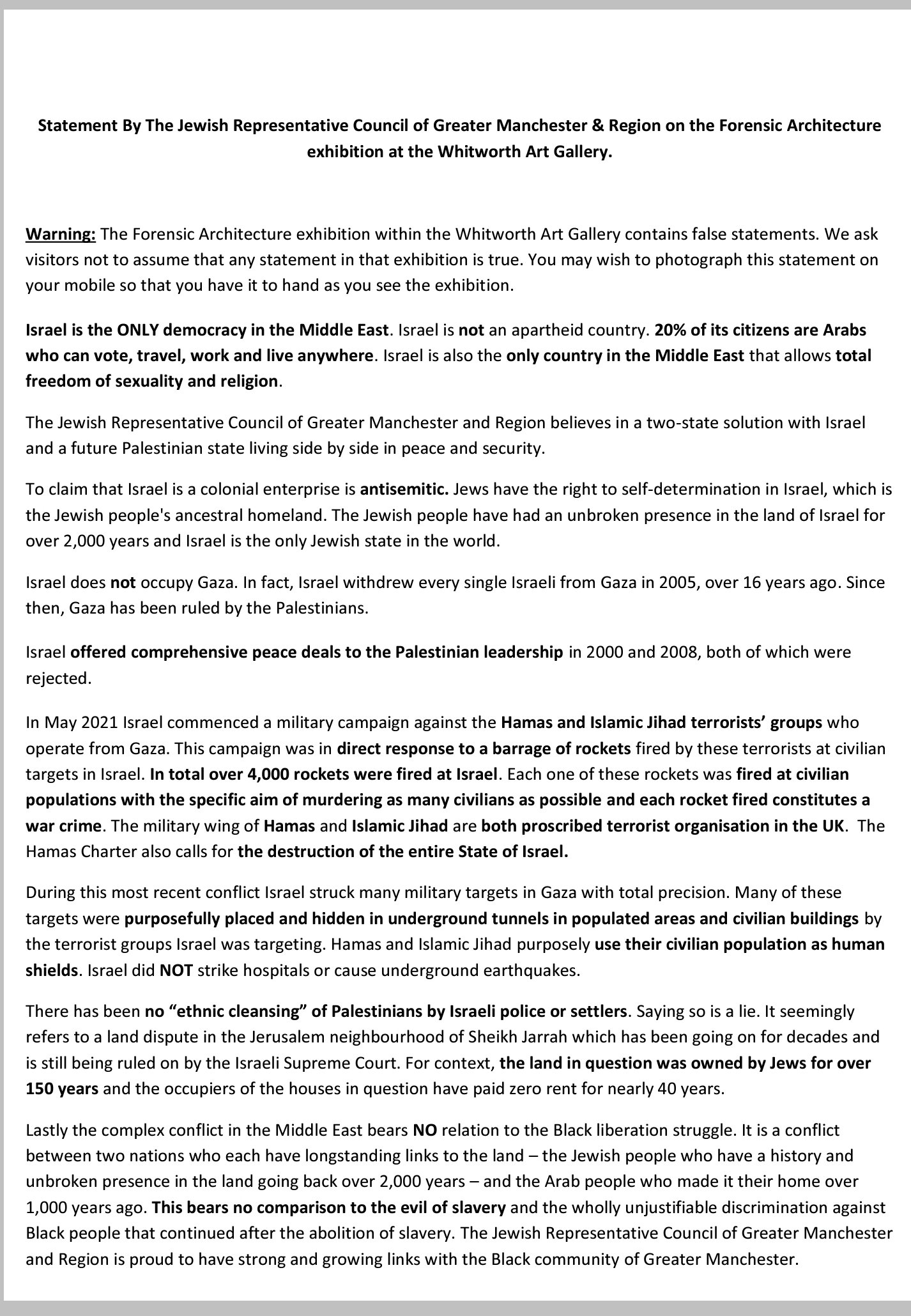 The inclusion of this statement was curiously absent from an op-ed on the row published in the Guardian by FA, (“Our art deals with real injustices, some in Palestine: no wonder we faced opposition”, Aug. 20th).

After spending the first few paragraphs of their Guardian op-ed attacking UK Lawyers for Israel*, a highly reputable mainstream Jewish group which fights BDS and other efforts to undermine Israel’s right to exist, and detailing some of their other projects, the op-ed eventually pivots the the matter at hand:

In May, as we worked on the [Manchester] exhibition, the latest round of Israeli attacks on Gaza began.

As you can see, the group isn’t even trying to be factual or objective, omitting the fact that the “Israeli attacks on Gaza” only began after Hamas decided to launch an unprovoked volley of rockets on Jerusalem.  In fact, the word “Hamas” doesn’t appear anywhere in the op-ed.

The FA writer(s) fail to acknowledge that the, in response to inquiries from The New York Times in July, IDF officials “denied any knowledge of a raid or seizure of equipment.”

Our statement, whose inclusion in the exhibition had been approved during its planning stages by the Whitworth’s curators, was written as these attacks were happening. We used terms such as “ethnic cleansing” and “apartheid” to describe the policies of the Israeli government in Palestine, because such characterisations describe the reality of Palestinian life  and are in keeping with the language of major Israeli and international human rights organisations…

Though you can read CAMERA’s in-depth rebuttal of Human Rights Watch’s apartheid lie, contrary to the op-ed’s suggestion, the reports alluded to, by Human Rights Watch and B’tselem, did NOT accuse Israel of “ethnic cleansing”, or even use the term.

Moreover, whether they’re referring to Palestinians in east Jerusalem, the West Bank or Gaza (or Arab citizens of Israel), the charge of “ethnic cleansing” against Israel is counter-factual, ahistorical and completely propagandistic. It’s also clearly contradicted by population statistics demonstrating consistent increases in Palestinian residents in these geographic areas.

They also make the following charge, defending their charge that Israel is a “settler colonial” state:

The term “settler colonialism”, similarly, has been used extensively by scholars to describe Israeli policies in Palestine.

Describing Israel, since its rebirth in 1948, as a “settler colonial state”, implies that all Israelis are “settlers”, and falsely suggests that Jews have no historical connection to the land and that Zionism is racist and morally illegitimate.  It also negates the historical reality that most pre-state Zionists arrived as refugees, escaping racism and mass murder in Europe – not, as those hurling this charge would have you believe, as conquerors seeking to extend their (of course, non-existent) territory.

Finally, there’s this, in the penultimate paragraph of the op-ed:

Our case is only one and not a particularly major example, of the smear campaign and legal attacks on Palestinian artists and intellectuals, many of whom face repression at the hands of Israeli occupation authorities, and censorship and restrictions on their freedom of expression internationally.

Their unsubstantiated claim that (unnamed) Palestinian “artists” and “intellectuals” face Israeli “censorship” and “repression” and “restrictions on their freedom of expression” in the West shows why NGO Monitor characterises FA as a pseudo-“research project that consistently generates analyses that are inaccurate, misleading, and blatantly prejudiced”.

Finally, readers may wish to read a post we published in February refuting the preposterous claim by FA – promoted by the Guardian – that the nephew of the late Saeb Erekat, who was killed by Israeli security personnel last year after he rammed his car into soldiers, was actually the victim of an “extra-judicial execution”.  The speciousness of their ‘research’ in that case helps further contextualise the lies and distortions in their Guardian op-ed.

(*Full disclosure: This writer proudly spoke at a UK Lawyers for Israel event in 2019.)