Last year, we decided to start monitoring the London-based Islamist news site 5 Pillars, due to its influence – it claims to be the “largest regulated Muslim news site in Europe” – and the fact that it’s regulated by IMPRESS, one of the UK’s media regulatory bodies.  Since then, our posts have demonsrated that 5 Pillars at times promotes raw, propagandistic anti-Israel incitement – the kind of incendiary content that would’t even appear at the Guardian.  (However, since they’re regulated, we’ve also been successful at getting editors to correct some of the more egregious content.)

This post about 5 Pillars involves the social media activity of their editor Roshan Salih, and content published on the site, since the rise of the Taliban.  Though, as the editor of an Islamist site, we wouldn’t expect Salih to support the presence of NATO forces in the Muslim country, as you can see by his tweets shown below, he’s actually been defending and at times promoting the Taliban, an extremist group whose brutality puts them in a league of their own – particularly in their treatment of women.

Though he’s tweeted that he’s “not a supporter of the Taliban”, he was quoted in The Independent (before the group took control of the capital) as hoping that they take control of the country.  And, as you’ll see below, it seems fair to characterise the 5 Pillars editor as clearly sympathetic to them.

On the “red herring” of women’s rights:

The Taliban victory over Western “imperialism and colonialism”:

On “white” feminists who criticise the Taliban’s treatment of women.

A defence of extreme Islamic punishments carried out by the Taliban (Hudud) including chopping off the hands of theives. 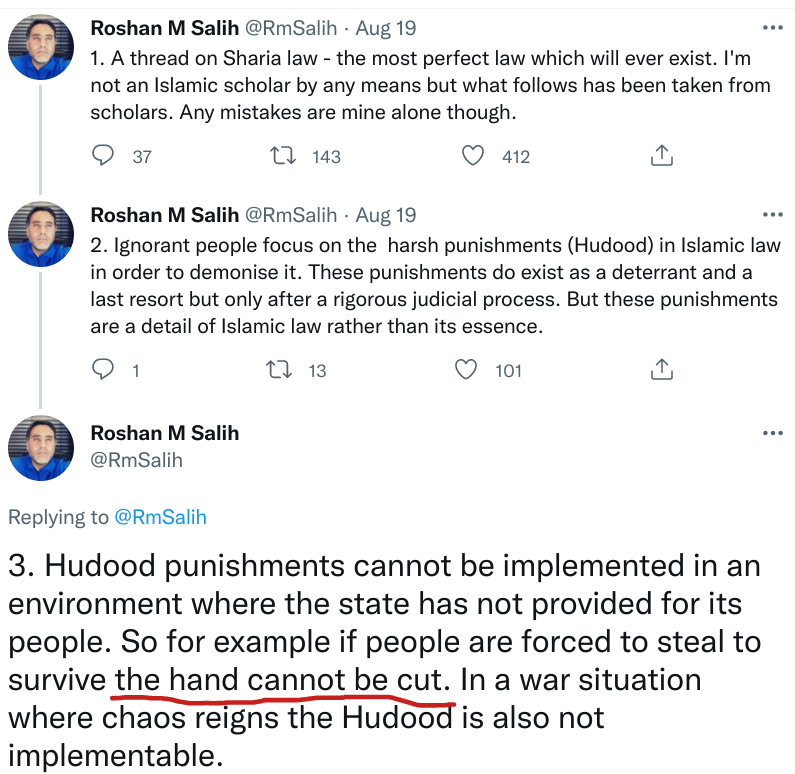 Salih’s views are also apparent in his choice of articles and op-eds published at 5 Pillars.

On Aug. 16th, a 5 Pillars published an openly pro-Taliban op-ed by Islamist extremist (and former Jihadist) Moazzam Begg (“History will record the foreign occupiers of Afghanistan were the bad guys”), and even suggested that “Taliban Islamic courts” represents a judicial system to be emulated.

In an Aug. 17th 5 Pillars webinar about Afghanistan, which included both Mozzam Begg and Yvonne Ridley (formerly of Iranian PressTV), Salih accused those in the West who’ve expressed concerns about the rights of women, minorities and opponents of the Taliban regime as “scaremongering”.  During the webinar, Begg consistently praised the Taliban’s, including what he termed their “un-bureaucratic” and “non-corrupt” courts and system of jurisprudence. There wasn’t one word of criticism of the Taliban (by Salih, Begg or Ridely) during the more than one hour webinar.

On Aug. 18th, 5 Pillars published an article  (“Taliban: We will rule as a strong Islamic government”) uncritically amplifying the risible claim by Taliban spokesman Zabihullah Mujahid that the government will protect women’s rights.

In contrast, our review of both Salih’s Twitter feed and the content on 5 Pillar’s site found no examples of anti-Taliban views.