On August 19th the BBC Jerusalem bureau’s Tom Bateman produced two reports based on the topic of a Gaza cleric’s call to the public to get vaccinated against Covid-19. However, both those reports were used to re-promote Israel-related talking points.

BBC audiences are told that:

“The attempt to encourage vaccine take-up comes as Covid-19 rates start to surge again in Gaza, where the health system is crippled amid Israel’s blockade and after years of conflict.”

As we all too often have cause to point out (especially since the Coronavirus pandemic began) there is no restriction on the entry of medical supplies to the Gaza Strip and the BBC’s repeated promotion of the notion that Israeli counter-terrorism measures pertaining to the movement of specific dual-use goods and people adversely affect medical services in the territory is not only materially misleading but hinders audience understanding of the real causes of chronic shortages of medical equipment and supplies in the Gaza Strip.

The image illustrating that report is captioned as follows: 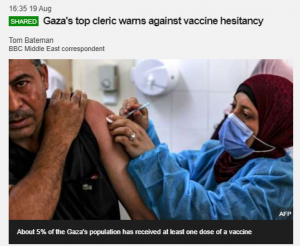 In the body of the report readers are told that:

“In Gaza a little more than 120,000 people have received at least one dose – only about 5% of the Strip’s population.”

The statement that 120,000 people is “about 5% of the Strip’s population” means that the BBC is claiming that the total population is 2,400,000. The Palestinian Central Bureau of Statistics lists the population of the Gaza Strip in 2021 as 2,106,745 while other sources give a lower figure.

Moreover, a different percentage was given in an audio report on the same story that was aired on the BBC World Service radio programme ‘Newshour’ on the same afternoon. Listeners heard the following (from 45:04 here) in the introduction from presenter James Menendez:

Menendez: “Cases of the virus are rising sharply there [Gaza Strip] but the Hamas-run health ministry says only about 10% of the population has so far been jabbed.”

After Bateman had described the call put out by the Gaza cleric, Menendez asked: [emphasis in italics in the original]

Bateman began his response by resurrecting a campaign that was very heavily promoted by the BBC – including himself – early in the year. Now as then, Bateman failed to clarify the political motives behind that campaign and the identities and agendas of its instigators.

Bateman: “Well it is certainly both things and the driving factor of that problem for many months was the issue of limited supplies of vaccines. There was – towards the start of the year – there was a big controversy because aid groups and human rights groups had called on Israel as the occupying power to supply vaccines. You might remember it vaccinated its population at the world’s fastest rate.”

Bateman made no effort to clarify that under the terms of the Oslo Accords the Palestinian Authority is responsible for the healthcare of Palestinians. Failing to state how many Palestinian workers Israel did vaccinate (over 105,000), he went on:

Bateman: “Ah…now…ah…Israel did vaccinate Palestinians who have Israeli work permits – they’re all based in the occupied West Bank – and also did deliver a very large consignment of Pfizer vaccines earlier this year but the Palestinian Authority in the West Bank rejected those, saying that were soon to expire.”

As we see, Bateman continues to amplify the PA’s baseless narrative concerning those vaccines while failing to clarify that they were instead given to Israeli and South Korean citizens.

Bateman: “But what the Palestinian officials have now relied on is a Pfizer order of about four million vaccines. They’ve had about a million of those and then using the COVAX programme from the World Health Organisation, they’ve had about – plus Chinese and Russian vaccines – they’ve had about another million. Overall, that’s still only enough to fully vaccinate around a million Palestinians. There’s more than five million in the West Bank – five million people in the West Bank and Gaza Strip combined – so it’s really been a painfully slow roll out. You know I was talking to one health official who said combining that with social issues about vaccine hesitancy among some has made it even more difficult.”

Listeners would obviously understand from Bateman’s portrayal that the Palestinian Authority has to date only received enough doses to fully immunise around 20% of the population under its responsibility: one million out of five million. According to the ‘Our World in Data’ website, as of August 16th 8.4% of Palestinians were fully vaccinated (429,818) and an additional 4.3% (218,577) were partially vaccinated. Clearly “the issue of limited supplies of vaccines” is by no means the sole factor at work but Bateman showed little interest in exploring the reasons why “vaccine hesitancy” among the Palestinian population has resulted in less than half a million people being immunised to date.

Bateman did not bother to clarify to BBC audiences that 41% of the population in the Gaza Strip and 36% of the population in PA controlled areas (38% overall) is under the age of 14 and hence not currently included in WHO recommendations which advise vaccination from age 18 upwards except in cases of high risk at younger ages. The median age in the Gaza Strip is 18, meaning that about half the population of around two million is not currently intended for vaccination. In other words, “enough to vaccinate around a million Palestinians” actually means that a higher proportion of the target population could have been fully vaccinated by now.

The failure to provide relevant information concerning demographics hinders audience comprehension of the figures given in both of Bateman’s reports. His focus on talking points relating to Israel rather than any serious examination of why less than half the number of Palestinians who could have been fully immunised at this stage have actually received the vaccine is clearly not conducive to building audience understanding of the story he purports to report.