On August 23rd the BBC News website chose to provide worldwide amplification for a report produced by an inadequately presented political NGO for the third time in less than a month.

The BBC’s article – “Israeli strikes on Gaza high-rises may be war crimes – Human Rights Watch” – describes the organisation behind the report only as a “campaign group”. Readers are not informed of the fact that ‘Human Rights Watch’ (HRW) has a long record of anti-Israel campaigning by means of frequent ‘reports’, ‘lawfare’ activity and support for boycotts, divestment and sanctions. Neither are they told that just last month its executive director was widely criticised for blaming a rise in antisemitism in the UK on Israeli government actions. 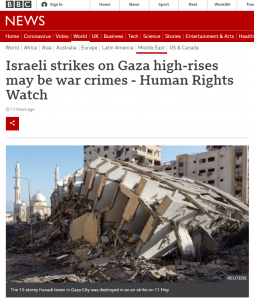 The BBC’s article cites casualty figures from the May conflict between Israel and terrorist organisations but fails to inform readers that around half of those killed in the Gaza Strip were terrorist operatives or that a significant number of civilians were killed by errant Palestinian rockets.

The BBC’s article goes on to promote the Hamas-favoured narrative concerning the background to that outbreak of violence.

“It began after weeks of spiralling Israeli-Palestinian tension in East Jerusalem which culminated in clashes at a holy site revered by both Muslims and Jews. Hamas – the militant Islamist group which rules Gaza – began firing rockets after warning Israel to withdraw from the site, triggering retaliatory air strikes.”

In addition to providing a direct link to this latest HRW report on the topic of four high-rise buildings destroyed by Israel between May 11th and May 15th, the BBC also promotes links to two of its own previous articles about the NGO’s earlier reports, both of which include links to HRW material.

The BBC has no comment to make about the report’s methodology of phone interviews with a grand total of eighteen “witnesses” who live under the rule of (and in some cases, under the same roof as) a widely-proscribed violent theocratic terrorist regime.

“HRW’s investigation was based on interviews with 18 Palestinians who witnessed the strikes or were affected by them, along with analysis of videos and photographs.

It found no evidence that members of militant groups involved in military operations had a current or long-term presence in any of the towers at the time they were attacked.”

The fact that HRW once again “found no evidence” does not of course mean that evidence does not exist but the BBC preferred to present the topic using predictable ‘he said-she said’ framing.

“Israeli authorities said the buildings housed offices of Hamas and other Palestinian militant groups, including the headquarters of certain units and military intelligence. One tower included offices for “the most valuable Hamas technological equipment” for use against Israel, it says.”

The BBC’s report also includes a link to one of its own articles from June in which it amplified baseless claims from Al Jazeera.

“The strike on the 12-storey Jala Tower, which housed the offices of the Associated Press (AP) news agency and the Al Jazeera broadcasting network, provoked widespread outrage.

In June, Israel’s ambassador to the US told AP executives that the building was being used by Hamas to develop an electronic jamming system against the Israeli military’s Iron Dome missile defence system.

But the AP’s executive editor said it had never had any indication that Hamas militants might be in the tower.”

As was the case in the two previous HRW reports concerning ‘Operation Guardian of the Walls’, this one also refers to the ICC investigation that the NGO has been promoting (including on BBC platforms) for some time.

BBC editorial guidelines on impartiality and related guidance address the issue of campaigns.

“4.3.17 The BBC must remain independent and distanced from government initiatives, campaigners, charities and their agendas, no matter how apparently worthy the cause or how much their message appears to be accepted or uncontroversial.

4.3.18 Careful thought will be necessary to ensure perceptions of the BBC’s impartiality are maintained when content is scheduled topically and coincides with a third party’s campaign or initiative. It is advisable to contact Editorial Policy.”

Although all three of the ‘churnalism’ pieces amplifying Human Rights Watch’s talking points that have been published by the BBC News website in the past month have described the organisation as a “campaign group”, as in the past on not one occasion has the BBC bothered to inform audiences exactly what that NGO (one of its most quoted and promoted) is campaigning for.

HRW has long been one of a number of politically motivated NGOs engaged in the ‘lawfare’ campaign against Israel. That background is obviously essential knowledge for any member of the BBC’s worldwide audience reading an article about Israel based on claims made by that NGO and yet time and time again, we see the BBC embracing the role of promoter of HRW ‘reports’ without any attempt being made to provide that crucial context.