In 2007, on the 40th anniversary of the Six Day War, the BBC News website produced an article titled ‘History of failed peace talks’ which is still available online. Readers are told that:

“The Oslo negotiations tried to tackle the missing element of all previous talks – a direct agreement between Israelis and Palestinians, represented by the PLO.

Its importance was that there was finally mutual recognition between Israel and the PLO. […]

The agreement spoke of putting “an end to decades of confrontation and conflict” and of each side recognising “their mutual legitimate and political rights”. […]

There was an exchange of letters in which Yasser Arafat stated: “The PLO recognises the right of the State of Israel to exist in peace and security.” Yitzhak Rabin said: “The Government of Israel has decided to recognise the PLO as the representative of the Palestinian people.”” 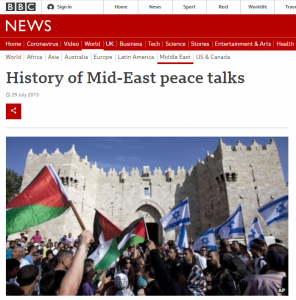 The same wording was repeated in a 2013 article titled ‘History of Mid-East peace talks’.

That “exchange of letters” did indeed take place on September 9th 1993 and four days later the Declaration of Principles (Oslo I) was signed at the White House with Yasser Arafat telling the assembled dignitaries that:

“My people are hoping that this agreement which we are signing today will usher in an age of peace, coexistence and equal rights. We are relying on your role, Mr. President, and on the role of all the countries which believe that without peace in the Middle East, peace in the world will not be complete.”

In September 1995 Arafat signed the Oslo II agreement which reaffirmed “determination to put an end to decades of confrontation and to live in peaceful coexistence, mutual dignity and security”.

Another example of BBC framing of the Oslo years dates from 2017 when it told its audiences that:

Notably the BBC’s “permanent public record” does not include statements made by Arafat and other Palestinian officials during those Oslo years which blatantly contradict the corporation’s across the board framing of Palestinian renunciation of violence and commitment to “mutual recognition” and peace.

However, this week – courtesy of MEMRI – it emerged that the BBC has a regular contributor who can fill that information gap.

“British-Palestinian journalist Abdel Bari Atwan said that Israelis know that the scenes from Kabul Airport will be repeated at Israel’s Ben Gurion Airport. He made his remarks in an interview that aired on Mayadeen TV (Lebanon) on August 19, 2021. Atwan said that the Israelis will then find that there are no planes leaving Ben Gurion Airport, and they will be forced to escape to the Mediterranean Sea. He further said that in 1995, PLO leader Yasser Arafat promised him that he would live to see the day that the Israelis will flee Palestine “like rats fleeing a sinking ship.” Atwan added: “Today, I believe that this prophecy will come true.””

Arafat offered me to take a walk outside. It was at night, around 1 AM. So, we went out to take a walk and he told me: ‘By Allah, you will see the Israelis fleeing Palestine, like rats fleeing a sinking ship.’ He told me: ‘You will get to see this in your time. I will not live to see that day, but you are much younger than me, and you will get to see this.’ Today I believe that this prophecy will come true.”

Arafat left Tunisia for the Gaza Strip in July 1994 so it is not clear whether Atwan’s recollection of the date of that conversation is inaccurate or whether the PLO leader was on a visit to what was at the time still the formal headquarters of that organisation.

What is apparent from Atwan’s account is that even at the height of the Oslo process, Arafat was in fact committed to an entirely different scenario than the one the BBC continues to promote to its audiences years later.

HOW MANY FALSEHOODS DID BBC ‘DATELINE LONDON’ VIEWERS HEAR IN 13 MINUTES?