The BBC News website’s Palestinian territories timeline – which is presented as “A chronology of key events” – includes the following entries under the sub-heading “Progress towards self-rule”:

The events described in that first entry could not of course have taken place on the given dates because the Oslo Accords Declaration of Principles was not signed until September 1993 and the Gaza-Jericho agreement was signed in May 1994. The Palestinian National Authority was established pursuant to that latter agreement and – as the BBC itself reports elsewhere – Arafat arrived in the Gaza Strip in July 1994. 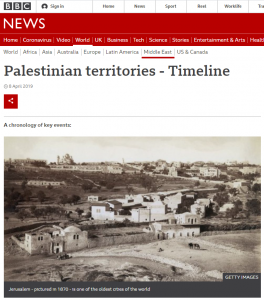 The Nobel Peace Prize was awarded to Arafat, Rabin and Peres in October 1994, with the ceremony taking place in December of that year – rather than the year before they signed the 1993 Oslo Accords that were the reason for the award, as claimed in this BBC timeline.

Seeing as this timeline is dated April 2019, it would appear that the inaccurate information has been presented to BBC News website users for at least well over two years.

CAMERA UK has contacted the BBC to request a correction.