Late on the evening of September 10th terrorists in the Gaza Strip fired a rocket at the Eshkol region in the Western Negev which was successfully intercepted by the Iron Dome defence system. As was the case in August when the first incident of rocket fire since May took place, the BBC did not bother to report that breach of the ceasefire that brought Operation Guardian of the Walls to a close.

On the evening of September 11th another rocket was fired at the Sderot area and it too was intercepted.

“A 29-year-old man sustained a light head wound after he fell while running to a bomb shelter. He was taken to Ashkelon’s Barzilai Medical Center for treatment, medics said.”

The following evening – September 12th – saw yet another incident, with the rocket again successfully intercepted.

“Shortly before 9 p.m. on Sunday night, one rocket was fired toward the town of Sderot near the Gaza border, triggering sirens there and in the surrounding community. Three Israelis were lightly injured as they scrambled for shelter, according to medics. Another two Israelis were treated by medics for acute anxiety attacks, according to the Magen David Adom ambulance service.”

In the early hours of September 13th the Eshkol region was targeted once again.

“Rocket sirens went off in the Gaza border area communities of Kissufim and Ein Hashlosha after the rocket was fired and was intercepted by Iron Dome, according to the IDF Spokesperson’s Unit. That rocket marked four days in a row that rockets were fired from the enclave into Israel, and the fifth rocket fired since the conclusion of Operation Guardians of the Wall in May.”

BBC audiences did not see any stand-alone coverage of those attacks. However, those reading a report titled “Naftali Bennett makes first visit to Egypt by an Israeli PM in a decade” published on the BBC News website’s ‘Middle East’ page on the afternoon of September 13th found a euphemistic reference to the May ceasefire having been “tested” in a photo caption. 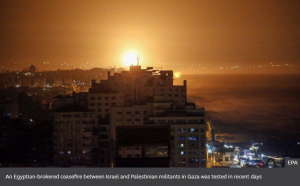 The penultimate sentence of that report promote false equivalence with a reference to “cross-border violence” that fails to clarify that all the incidents of airborne arson attacks, violent rioting and rocket fire in recent weeks (which have been largely ignored by the BBC) to which Israel has responded were initiated or condoned by Hamas.

“In recent weeks, that ceasefire has been tested by a rise in cross-border violence.

The Israeli military said earlier on Monday that it had struck targets belonging to the militant group Hamas, which controls Gaza, after rockets were fired at Israel for the third night in a row.”

As we see, BBC coverage of four separate incidents of rocket attacks against Israeli civilians on consecutive days boils down to twelve words at the bottom of an article about a different topic. 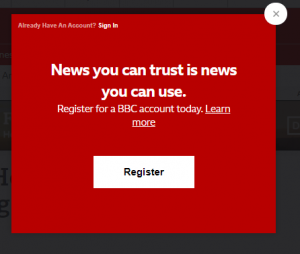