On the morning of September 26th visitors to the BBC News website’s ‘Middle East’ page found the following headline: 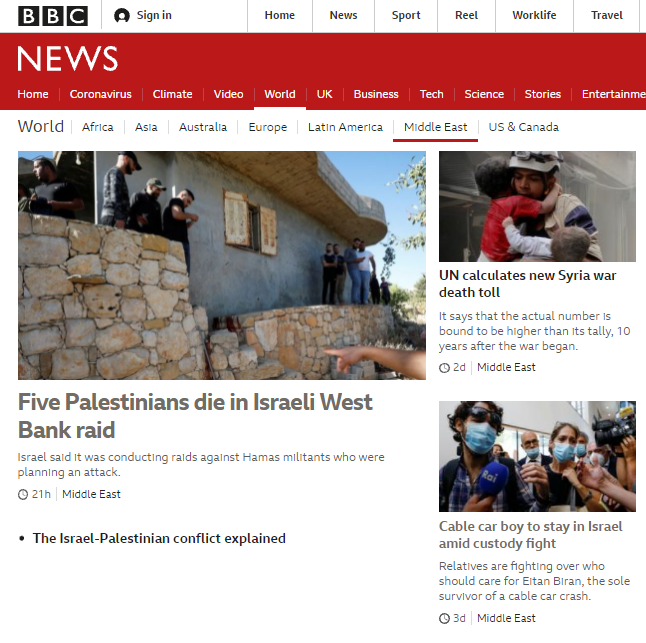 No clue as to who those Palestinians were, what they were doing at the time of their death or how they were linked to the “raid” was provided by that headline. The title of the report to which it links – “Five Palestinians killed in Israeli West Bank raid against militants” – likewise fails to inform BBC audiences that four of the five people killed were members of terrorist organisations who were shooting at Israeli soldiers and another was engaged in violent rioting. 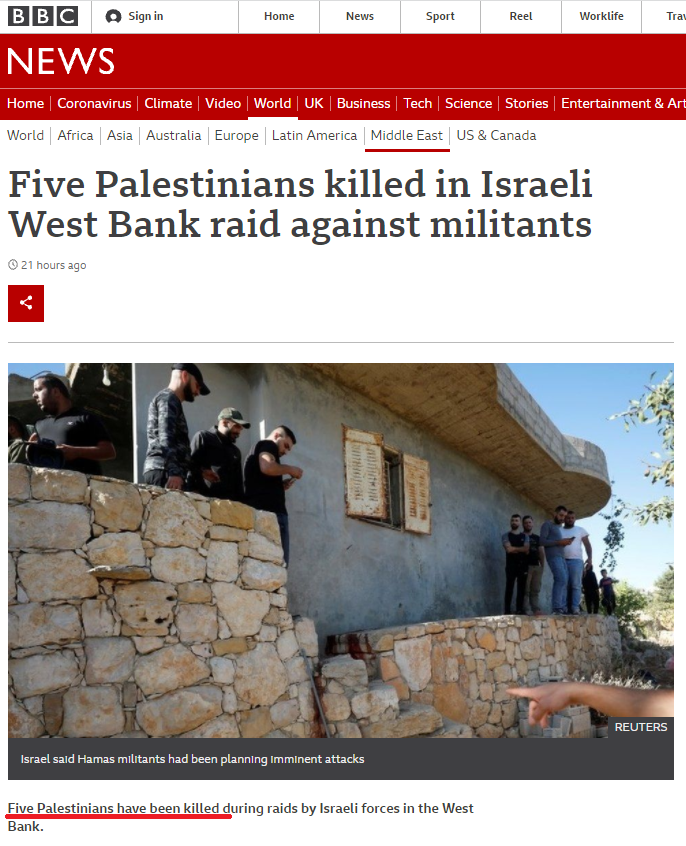 Regular readers are no doubt aware of the BBC’s double standards on language when reporting terrorism but even usually used euphemisms such as ‘militants’ and ‘gunmen’ were not appropriately employed in these two headlines in order to help audiences understand the circumstances in which those people were killed. Moreover that headline was not improved even after the report was updated to include Hamas’ acknowledgement of three of the five. By the time that update was made, it was also known that one of those killed was a member of the Palestinian Islamic Jihad.

The first part of the relatively short report provides scant details of the story, with the aim of the operation to arrest wanted members of a Hamas terror cell planning imminent attacks in Israeli cities described as follows:

The report fails to inform BBC audiences that several arrests were made and weapons and ammunition seized during the operations in five locations.

The second half of the report begins by telling readers that:

“Correspondents say there has long been concern in Israel that Hamas, which runs Gaza, could also challenge its rival the Palestinian Authority in the West Bank.”

That concern is of course by no means limited to Israel and is no less disquieting to the Fatah-dominated Palestinian Authority. Nevertheless, the BBC’s Jerusalem correspondent Tom Bateman found it appropriate to amplify spurious and opportunistic PA talking points on Twitter.

The following day Bateman Tweeted about another ‘raid’:

Bateman’s account excludes relevant context that was already known hours before he put out his Tweet. The BBC’s report was not updated to include that follow-up information.

It was the second straight night Israeli troops operated in the town of Bidu, near Jerusalem. Three Hamas gunmen were killed in a shootout with soldiers the night before.

In the latest raids, forces found a significant cache of explosive devices intended to be used in a terror attack in the capital in the coming days, according to television reports Monday.

The “kilograms of explosives” were hidden in a well whose exact whereabouts were determined after the Shin Bet internal security service interrogated the cell’s mastermind and other members, the reports said.”

Clearly the BBC’s unhelpful phrasing of headlines and superficial reporting does not comply with the requirement to provide “duly accurate and impartial news” and “a range and depth of analysis” in order to adequately “build people’s understanding” of this story.