On the afternoon of October 1st a report was promoted on the Bristol page of the BBC News website’s UK regions section using the wording “Israeli comments professor sacked by university”. 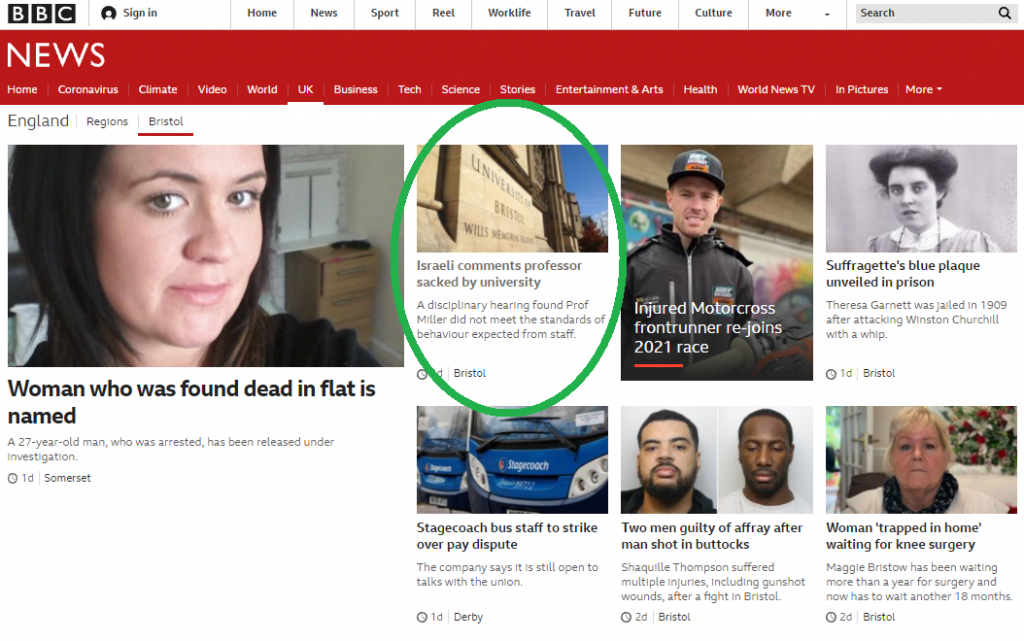 The report was promoted by BBC West on social media with similar phrasing: 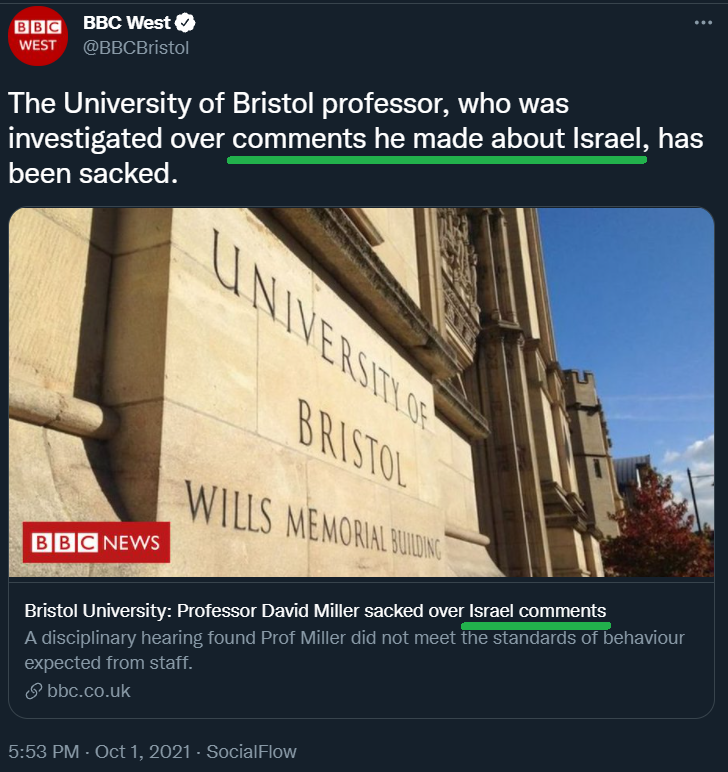 The unattributed article itself is headlined “Bristol University: Professor David Miller sacked over Israel comments” and it opens by telling readers that:

“A University of Bristol professor being investigated over comments he made about Israel has been sacked.” [emphasis added] 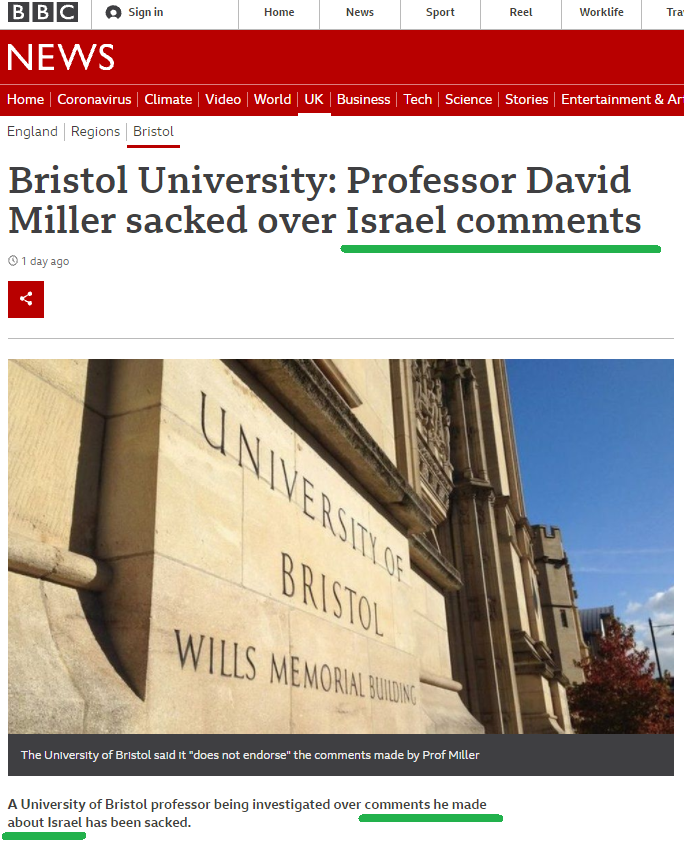 As many pointed out on social media, the BBC’s chosen framing misleads readers with regard to “comments” made on several occasions by David Miller that caused a long-running controversy which eventually resulted in termination of his employment.

It was not “comments he made about Israel” which promoted condemnation from hundreds of academics but rather statements concerning British Jewish students:

“We, the undersigned, wholly condemn recent statements by Prof. David Miller of the University of Bristol, purportedly about ‘Zionism’ and the so-called ‘Zionist movement’. Rather than geopolitical theories, some of these are statements directed at Jewish students, UK university Jewish Societies (JSocs) and the Union of Jewish Students. We believe that these statements are morally reprehensible and risk the personal security and wellbeing of Jewish students and, more widely, Jews in the UK. Prof. Miller’s views represent a conspiracy theory, and bring great shame upon UK academia as well as upon UK political discourse. We are of the opinion that these statements risk undermining community relations in the UK, while giving aid and comfort to antisemites everywhere.”

It was not “comments he made about Israel” that prompted the CAA to take legal action on behalf of students at Bristol University:

“Our legal case against the University concerned alleged unlawful harassment on the basis of Jewish ethnicity and Judaism, amounting to breaches of the Equality Act 2010, as well as breaches of contract.”

It was not “comments he made about Israel” that prompted a prominent law firm to provide pro bono legal advice to student organisations:

“…it is both hugely depressing still to be having to fight antisemitism on campuses in the UK today, and hugely satisfying to see the University of Bristol finally recognise that Professor Miller did not meet the standards of behaviour expected from university staff.”

So why did BBC West elect to frame the story of Miller’s dismissal as being about “Israel comments” rather than – as even the Guardian was able to report – about antisemitic comments?

In the past we have repeatedly documented on these pages the BBC’s long and dismal record of amplification and mainstreaming of the Livingstone Formulation. As David Hirsh explained in an essay published in March of this year, that rhetorical device is relevant to the David Miller controversy:

“It should be noted that over the last five years, through the experience of the rise and fall of Jeremy Corbyn’s leadership of the Labour Party, there has been a strong consensus in the Jewish community, and in the institutions of the Jewish community. There is wide agreement that left wing antisemitism is real and significant. Miller’s method, therefore, designates the Jewish community, not just this or that individual, as being part of ‘Israel and its apologists’.

So, the Macpherson Principle tells us that a person who says they have experienced racism should be treated with respect and their experience should be taken seriously.

But the Miller Principle would seem to tell us that a person who says they have experienced antisemitism, if it is related to rhetoric about Israel, should be assumed to be lying.

This practice of treating Jewish victims of antisemitism as part of a conspiracy to silence criticism of Israel, is well documented. It is named ‘The Livingstone Formulation’.”

In this latest report, BBC Bristol chose to amplify Miller’s use of the Livingstone Formulation without any explanation to readers:

“In a video, circulated online, Prof Miller, who is professor of political sociology and a member of the School for Policy Studies, reportedly said Jewish student groups, who had lodged formal complaints about his views, were part of a “drive to stop anyone speaking out about Palestine”.”

The report also promotes a link to a previous BBC article amended to include comments from a fringe group without any effort made in either report to inform readers of the people behind it and its dubious political agenda.

“At the time, the Support David Miller campaign said it was “appalled” that the University of Bristol had launched an “unnecessary investigation” into Prof Miller’s comments.

It said: “Every academic and student in the country should be deeply concerned about this coordinated attack on academic freedom.””

The BBC’s inaccurate presentation of the real topic of this article once again demonstrates that the corporation’s coverage of stories relating to antisemitism repeatedly fails serve the interests of its funding public.

BBC CONTINUES TO PROMOTE WHAT THE EHRC RULED ‘UNLAWFUL HARASSMENT’