A Telegraph article by US correspondent Josie Ensor (“US politics entering ‘new era of Left wing power’ led by fiery New York progressives”, Oct. 2) celebrated AOC and her fellow far-left members of Congress, but failed to inform readers about the dark side of the group known as the “Squad”. 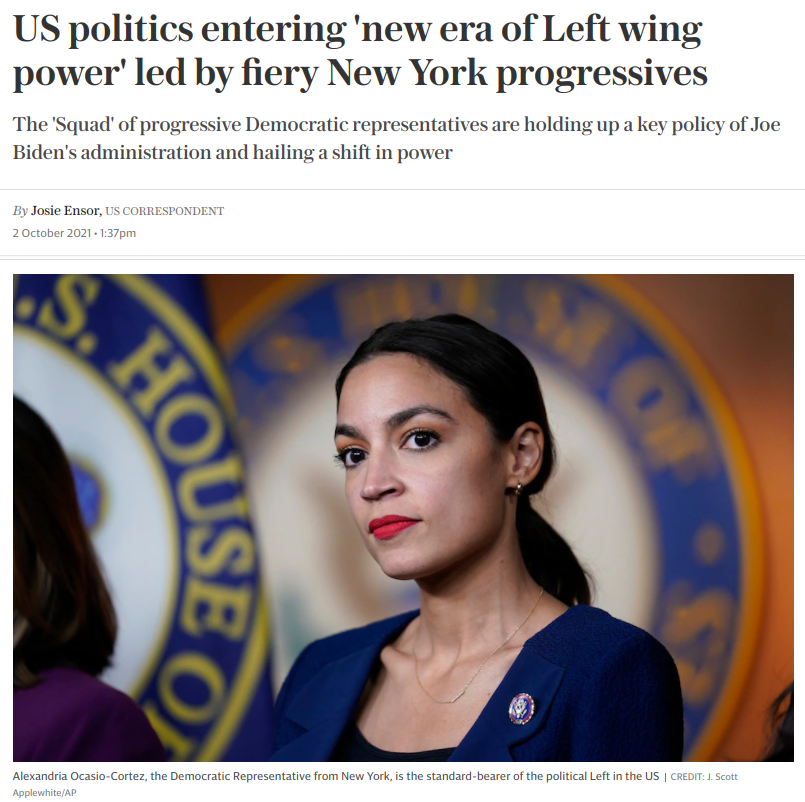 Though the piece focuses primarily on AOC (Alexandria Ocasio-Ortez), Ensor advances the narrative that the Squad’s six-member gang is re-shaping Democratic politics, and moving the party in a more progressive direction.

Such is the growing influence of the 31-year-old former bartender from the Bronx and her six-member gang of progressives known as the “Squad”, that they have successfully managed to hold up the centrepiece policy as they demand America spends – and taxes – more.

First, though AOC was born in the Bronx, her family left the city when she was five, moving to the wealthy suburb of Yorktown Heights, where she lived until leaving to attend college at the prestigious Boston University.  Also, the reason the Squad was able to hold up Biden’s “centrepiece policy” isn’t due to their organic influence, but because the Democrats hold an extremely slim majority in the House of Representatives, which can allow them to leverage their meager numbers to hold up legislation.  As even Ensor acknowledges, AOC has “no formal party leadership role”.

But, by far the most egregious misrepresentation of the “Squad” – consisting of AOC, Ilhan Omar, Rashida Tlaib, Ayanna Pressley, Jamaal Bowman and Cori Bush – is Ensor’s omission of their obsessive hostility towards Israel, which has included the rejection of Israel’s right to exist, and other expressions which constitute antisemitism according to the IHRA Working Definition.  We’ve documented the anti-Jewish rhetoric of Omar and Tlaib – the most outspoken Israel haters among the Squad – on these pages.

Far from representing the vanguard of the ‘new’ Democratic Party, evidence that the Squad’s position on Israel is at odds with the overwhelming majority of the party was seen in a vote on BDS, which most of the Squad supports. In 2019, the US House of Representatives voted 398-to-17 to condemn BDS, with only 16 Democratic members opposing the measure.

The only time Ensor alludes to the Squad’s position on Israel is in the following sentence:

…in recent weeks [the “Squad”] has flexed their growing muscle, including by temporarily holding up military aid to Israel (a lightning rod for the Left) – something that had hitherto been considered unthinkable.

In fact, what Ensor boasts about is the Squad’s success at temporarily holding up funding for Israel’s Iron Dome defensive missile system.  Funding for the Iron Dome eventually passed the House in a 420-9 vote, and left many wondering in what sense it’s “progressive” to oppose a system that defends Israeli civilians from rockets launched by antisemitic extremist groups in Gaza.

The Telegraph reporter also failed to mention that AOC, after first voting “No” on funding, changed her vote to “Present” (an abstention).  Some observers attributed her change to cold political calculus relating to her possible run in the 2022 New York State Democratic Senate Primary, where she’d face incumbent Majority Leader Chuck Schumer, who’s Jewish and pro-Israel, and would have to woo voters in a state with a relatively large Jewish population.

Finally, when we say in our headline that the Squad is “Corbyn adjacent”, if anything, we’re being kind.  In addition to their extreme hostility towards Israel, many Squad members share the former Labour leader’s sympathy towards leftist authoritarian leaders, and, in fact, AOC openly praised Corbyn, deemed personally antisemitic by the overwhelming majority of British Jews.

It was an honor to share such a lovely and wide-reaching conversation with you, @jeremycorbyn!

Also honored to share a great hope in the peace, prosperity, + justice that everyday people can create when we uplift one another across class, race, + identity both at home & abroad. https://t.co/7qnz42I8du

Whether or not AOC and her Squad will succeed at remaking the Democratic Party in their image, as Ensor seems to believe they will, the Telegraph correspondent owes her readers far more in examining their putative rise than a fawning profile devoid of any real critical scrutiny.