The BBC’s ‘On This Day’ website includes an entry for September 28th 2000 which is titled “‘Provocative’ mosque visit sparks riots”. 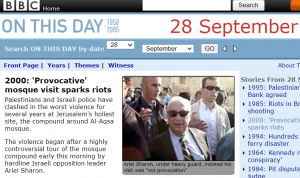 “Palestinians and Israeli police have clashed in the worst violence for several years at Jerusalem’s holiest site, the compound around Al-Aqsa mosque.

The violence began after a highly controversial tour of the mosque compound early this morning by hardline Israeli opposition leader Ariel Sharon. […]

BBC correspondent Hilary Andersson said the visit was clearly intended to underline the Jewish claim to the city of Jerusalem and its holy sites.”

Of course Ariel Sharon did not visit a mosque as claimed in that headline. Rather he visited Temple Mount which the item describes as follows, omitting any explanation of why it is the holiest site for Jews:

“The site of the Al Aqsa mosque and its compound, known as Temple Mount to Jews and Haram al Sharif to Muslims, is sacred to both religions.”

The ‘context’ accompanying that item tells readers that:

“It was the beginning of a wave of rioting which escalated into what is now known as the second Palestinian intifada (uprising), or sometimes the Al Aqsa intifada.[…]

Critics say Mr Sharon knew the visit would trigger the ensuing violence and gambled on the Israeli public turning to a tough leader like him who would know how to handle it firmly.”

As we have documented here in the past, the BBC continued in the years that followed to promote the myth that the 34-minute visit to Temple Mount which was coordinated in advance with the Palestinian Authority’s security forces was the cause of the second Intifada.

As we have also documented, that myth has been shown to be baseless by various Palestinian figures time and time again.

“I AM GOING TO START AN INTIFADA” 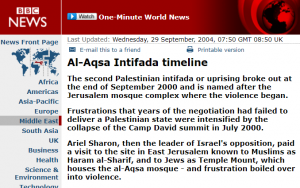 Over two decades on, the disinformation promoting Sharon’s visit to Temple Mount as the prime, if not sole, cause of a terror war that lasted five years is still available on BBC platforms.

Twenty-one years of disinformation is not a mistake. It is a commitment to promote a one-sided politically motivated narrative to generation after generation of BBC audiences.

Like Loading...
Tags from the story
Accuracy, Ariel Sharon, BBC, BBC News, BBC Online, Second Intifada, Temple Mount
Written By
Hadar Sela
More from Hadar Sela
The BBC fluffs out a report with background on a party it...
Read More